Why can't these two get along? 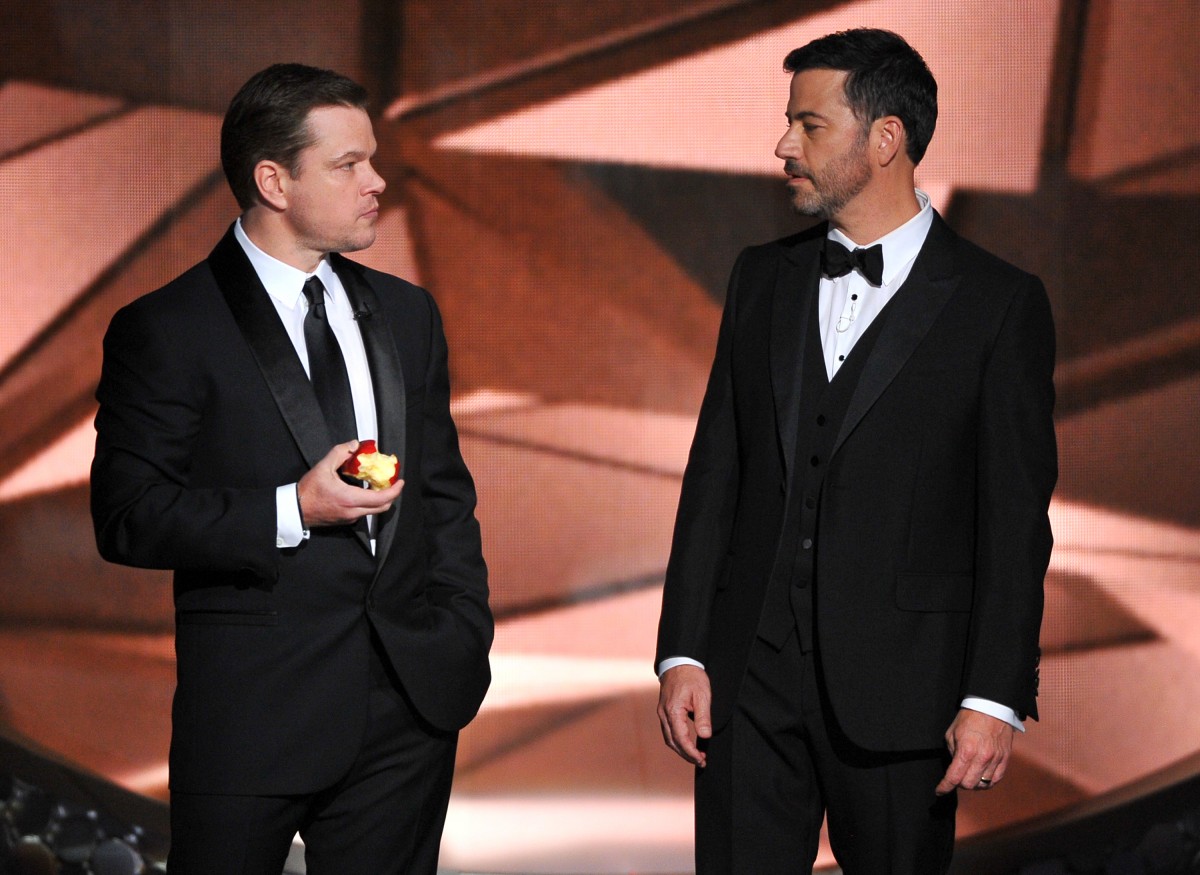 Damon harassed Kimmel at the Emmys in 2016. PHOTO BY VINCE BUCCI / INVISION FOR THE TELEVISION ACADEMY / AP IMAGES

Oscars host Jimmy Kimmel took on his longtime foe Matt Damon tonight, ribbing him for passing up on the leading actor role in the multi-nominated Manchester by the Sea.

Damon, a Manchester producer, did not star in the film. Despite typically being “selfish,” Kimmel said in his monologue, Damon gave the job to buddy Casey Affleck, instead.

“He handed what turned out to be an Oscar-caliber role over to his friend and made a Chinese ponytail movie instead,” Kimmel quipped in his monologue. “And that movie, Great Wall, went on to lose $80 million. Smooth move, dumbass.”

Kimmel also noted how far back he and faux nemesis Damon go. “I’ve known Matt so long, when I first met Matt I was the fat one.”

Later, Kimmel cued the play-out music as Damon took the stage with Ben Affleck, and mocked Damon’s performance in 2011’s We Bought a Zoo, while noting that Damon has “almost no discernible talent.”

Jimmy Kimmel rips Matt Damon with fake ‘We Bought a Zoo’ tribute: “He has almost no discernible talent.” #Oscars pic.twitter.com/HpX8zh8l73

Damon took on his frenemy earlier this month during an appearance on Ellen. He said he had “extremely low expectations” for Kimmel tonight, and that letting Kimmel host was “bad for everybody.” Kimmel stoked the flames on Friday by doodling on a picture of Damon’s face, referring to him as the “best picture vominee.”

Asked about Kimmel on the red carpet earlier this evening, Damon said he was ready for some mud-slinging. “He’s talentless himself, but unfortunately he’s got an incredible group of writers who work for him, so I’m afraid. I think I’m in for it tonight,” he said.

“He’s talentless himself… I’m afraid, I think I’m in for it tonight.” – Matt Damon on @jimmykimmel. #Oscars https://t.co/nqOTlyLbg6 pic.twitter.com/HjR4sjMyTy

At the Emmys last year, Damon marched up on stage to harass Kimmel after he found out he’d lost out on an award to John Oliver.

“This is so humiliating,” Damon said, relishing in Kimmel’s loss. “I’m sorry. You lost and now you’ve got to stand out here for the rest of the night in front of everybody.” Kimmel struck back: “Tell your mom I liked them apples,” he said.