Leslie Odom Jr. Kicks Off a Symphony Performance Series with the Boston Pops

Catch up with the Hamilton star before he takes the stage at Symphony Hall in June. 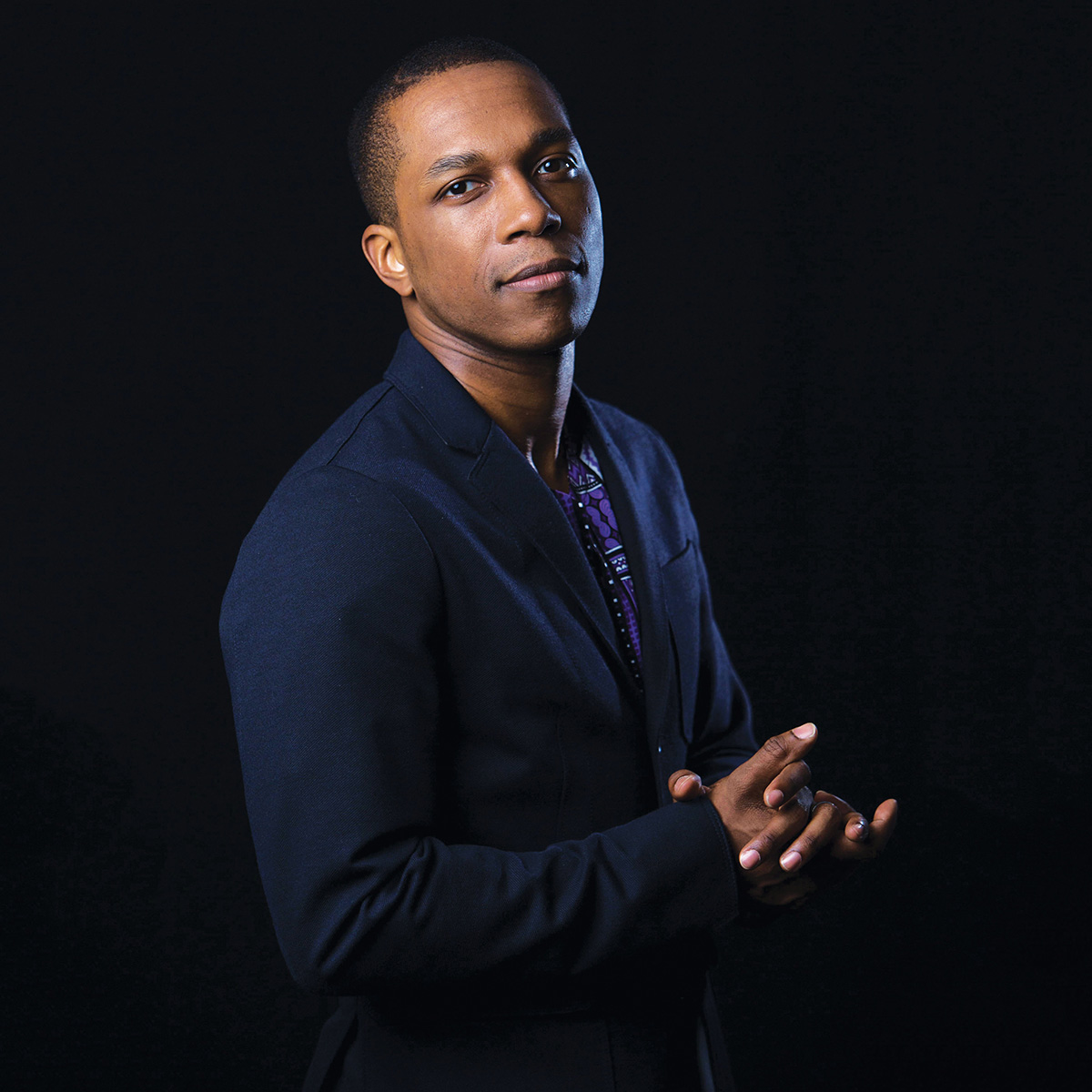 Leslie Odom Jr. has appeared on more than a handful of network television shows—CSI: Miami, Law & Order: SVU, Smash, even an episode of Gilmore Girls. But nothing skyrocketed him to fame quite like the runaway Broadway hit, Hamilton. Odom won a Tony for his portrayal of the nuanced character Aaron Burr—and even Hamilton creator Lin-Manuel Miranda concedes Burr sings the best songs.

Thanks to the show, Odom’s opportunities as a singer and an actor continue to grow. Exhibit A: He’s kicking off a series of symphony shows in Boston this June, commanding the stage alongside Keith Lockhart and the Boston Pops.

Ahead of that performance, Boston caught up with Odom about his latest movie, Murder on the Orient Express, coming out this Thanksgiving; what he’s bringing to the stage this summer; and why he almost quit show business completely.

Thanks so much for taking the time. I know you’re busy—you’re a new dad, right?

I am going to be a new dad. We’re expecting a little girl in about two months.

Awesome, congratulations. You’re also working on a film adaptation of Murder on the Orient Express?

Yes, I was in London for about four months. Kenneth Branagh directed it, and the cast is stacked. Johnny Depp, Penelope Cruz, Michelle Pfeiffer. One of my dear friends from college, Josh Gad, was there. I play Dr. Arbuthnot. Everybody on the train is a suspect. Agatha Christie’s got a series of these novels that follow [Hercule Poirot’s] exploits, so it could could possibly be a reboot of a franchise, which is really cool. Ken is not only a brilliant actor, he’s a great and well-respected director.

Is the role you’re playing possibly a recurring one?

We joked, because we had so much fun together, we could just be a repertory company and all play different roles in that. But part of the fun is watching Poirot travel the world and have to figure out his way in a landscape and a culture that maybe he is unfamiliar with. It’s really about new people, a new murder, new suspects, new situations. I don’t think Dr. Arbuthnot would be be back, but I’ll tell you what, if I got a call from Kenneth Branagh, I’d be anywhere he wanted me.

I’ve read that around the time you learned about Hamilton, you were actually considering giving up on your acting career.

Actually probably about four or five years before Hamilton, I was absolutely on the verge of quitting. I had kind of been kicked around the business for about a decade, and I was looking to possibly transition to something a little more steady. I couldn’t figure out how you grow up in an industry when you don’t know where your next paycheck is coming from. It’s something a lot of Americans are feeling, not only just in the arts.

But I met with a mentor of mine, and he gave me probably the best advice. He meant I needed to get into the driver’s seat of my own career. I was really sitting at home to wait for the phone to ring, and it wasn’t. He was really challenging me: What are you doing for yourself when the phone’s not ringing? If you can figure that out, you can sustain yourself, and you will last. Without that pep talk from him, there would absolutely be no me in Hamilton, without question. His name is Stuart Robinson. He’s a major acting coach out in LA, and he’s actually my father-in-law now, but at the time he was not.

So, your jazzy, self-titled album—I believe that was concurrent with the early days, or even before Hamilton. Is that what you did with that advice?

It’s absolutely one of the things I did. [First,] I got into a six-week acting class [Robinson] was teaching, to go back to fundamentals and see if there was anything in my work that I could correct. I didn’t get to finish the course because I started working so much. I moved back to New York to be on a show called Smash.

Smash was a great job, but it was kind of the anti-Hamilton. Hamilton used me up in every single way, and I loved that. I was getting to my end of days with Smash and I had more to give. So, I met a producer and a dear friend, his name is Joseph Abate, and he said, ‘Why don’t we get in the studio and start working?’ And—nothing like Hamilton gave me—but I had a little bit of notoriety from Smash, so we were able to raise some money and make a record. It’s still revealing itself what a positive thing that was for me to do, recording that record.

Which, I believe, is why we’re talking right now. The album is stripped down arrangements. So, what will your performance be like with the Boston Pops and Keith Lockhart?

Since Hamilton, the quality of opportunities that we’ve been given have gone way up, because we’re talking about me performing with the Boston Pops [laughter]. This year, really, for the first time ever, I’m performing with symphonies and orchestras, and it really is new. We’re forming what those songs will be now. Some of the stuff from the album will be included, but like you said, I do these arrangements with usually five instruments. Doing these arrangements with 75 instruments is very different, so we’re going to have to find which songs lend themselves to this new format.

It starts with Joseph Abate, and we have a team of collaborators and arrangers that help us. Whenever I’m a hired hand on a TV set or a movie set, or even a Broadway show, there’s a director, there’s a producer, and I’m there to fulfill their vision. Whenever I step into the recording studio, or on stage as a vocalist, I’m in charge. It’s really about my imagination, and laying it out in a clear enough way so people can take it as far as it can go.

Can you give us an idea of what the audience will hear in Boston Symphony Hall? Songs from the album, maybe some Hamilton songs?

One hundred percent. I’m not interested in disappointing that audience at all. We are very aware that most of the time, if people are coming to see a Leslie Odom Jr. show, they’re expecting to hear the songs they know Leslie Odom Jr. for. The show’s going to have Hamilton songs, songs from the album, and we also take the opportunity to try out new material, as well.

Are you working on new recordings?

I am. We are started writing sessions while I was in London. I signed a record deal with S-Curve Records early last year, and we put out two albums since then. It’s also really wonderful to have a recording home that I can always always call up and get support for new art. It’s a blessing.

Is the new album running the gamut from standards, show tunes, and pop songs done in that style?

We want it to be a logical next step from what we’ve recorded, but we want to get some original songs on there. My first album included songs like “Autumn Leaves,” or “The Party’s Over,” so trying to stack up a new song next to these classics is a tall order, but we’re going to try it out.

Are you touring this spring and summer?

I’m going to take some time off when the baby comes. It was so crazy after Hamilton. All good, but I had never really experienced anything like that. We left the show kind of like, ‘Oh, I hope there are new opportunities.’ But really, the phone started ringing and it never stopped. I was gone so much. We also recorded the Christmas album in that time. I have really no desire to return to that schedule right away. It’s a few symphonies… I’ll be at the Hollywood Bowl in an Ella Fitzgerald tribute in July, we’ll be at the Newport Jazz Festival in August. A lot of different things. The jazz festival circuit is something I’ve never done, and so is a symphony.

When you’re getting something started like that, you really need somebody to give you a shot to fail or succeed. I’m very grateful for the chance to come to Boston and try our hand at this thing.

You’re not throwing away your shot. Sorry.