There's a three stage setup for artist performances this year at the Harvard Athletics Complex in Allston. 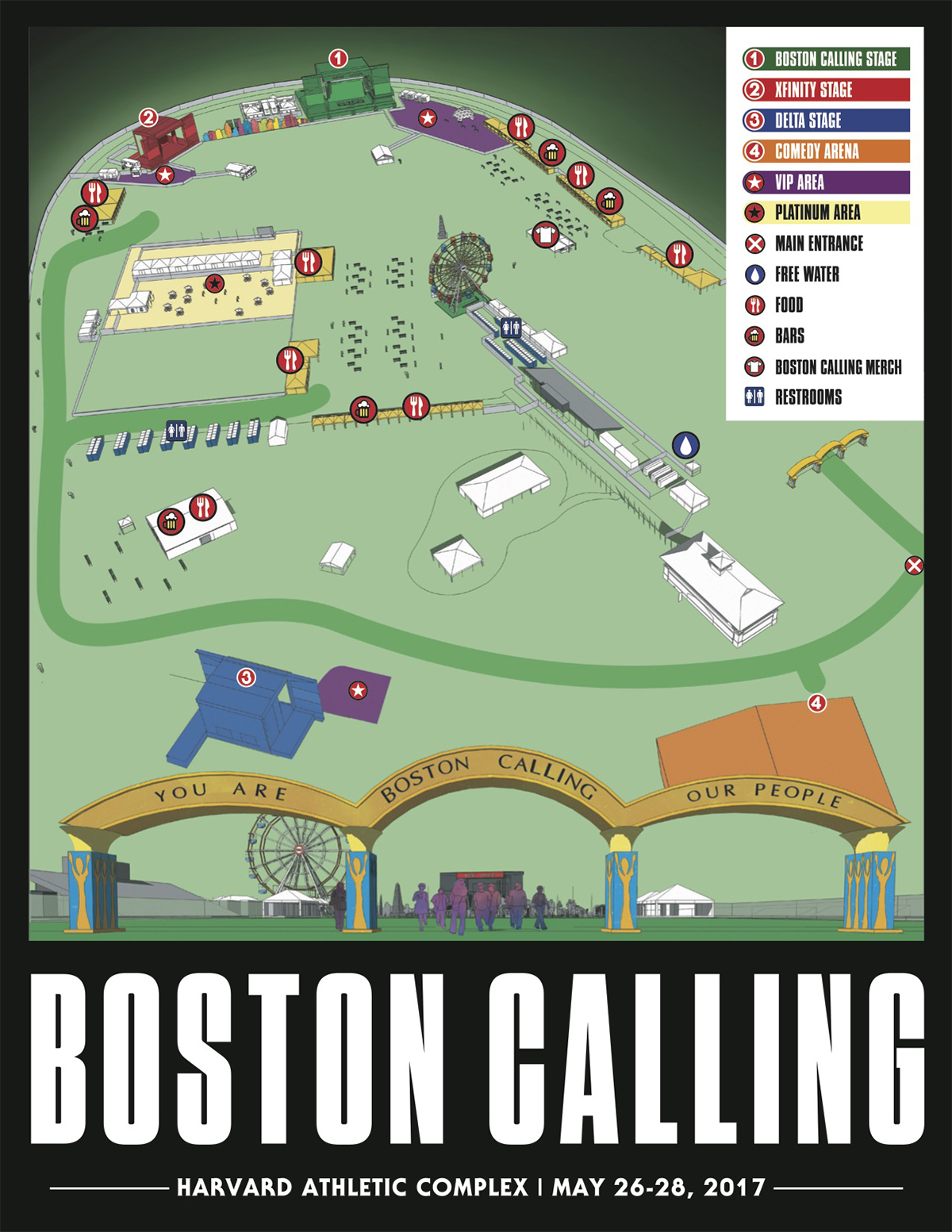 Along with the new location, the festival will also have a new look. Russ Bennett, a Vermont transplant, is the mastermind behind this year’s Boston Calling layout. And the design is in good hands: His previous experience includes designing the layout of Bonnaroo.

Spread across 16 acres of Harvard University’s Athletics Complex, Bennett’s design takes advantage of the nature already present. This includes the wide opens spaces of Harvard’s athletics fields and the “lighting and ambiance” you get just from being outside. No more City Hall looming over you—expect to have plenty of space to stretch out on the grass and really relax.

“We’ve provided enough room for people to get away from themselves a little bit. There’s enough room to play a little Frisbee or something somewhere, because I think that’s important as well,” Bennett says. The festival will feature a new, three stage setup for artist performances this year, instead of the two stage setup of years past.

There’s also a comedy area for the new comedy line up added to this year’s event. Bennett has also designed an entrance for the festival that “welcomes people so they know when they’ve crossed into the realm,” of Boston Calling, he explains.

With the added space to stretch out that the athletic complex offered, Bennett was able to get a little creative. You’ll now be able to peer down on your fellow concertgoers from atop a Ferris Wheel, and there will be several more food and drink tents to sample. But Bennett is a little cagey about some of what you’ll see there—don’t expect to get a glimpse of some of the specifics about the visuals until you pass through that fancy new entrance.

Another new feature this year is the incorporation of artists lyrics into the venue. Bennett has selected snippets of lyrics from the 45 artists and placed them all throughout the area. There will also be a mural created by a team of artists that Bennett says will represent the multiculturalism of Boston, including some work from a local artist.

Bennett sees designing Boston Calling’s layout as an opportunity to “help people live together, even for a short period of time.”

“Music and art has this ability to cross all lines in many ways,” he says. “Whatever your politic might be, or your philosophical or religious background. People can come and listen to the same music that have wildly different views about some topical thing of the day. But they’re all having the same uplifting and joyous experience.”

You’ll be able to experience it all alongside Solange, Tool, Chance the Rapper, and the other Boston Calling artists over Memorial Day weekend. Excited yet?