It's art you can only see with your smartphone, all within the familiar confines of Salem, Massachusetts. 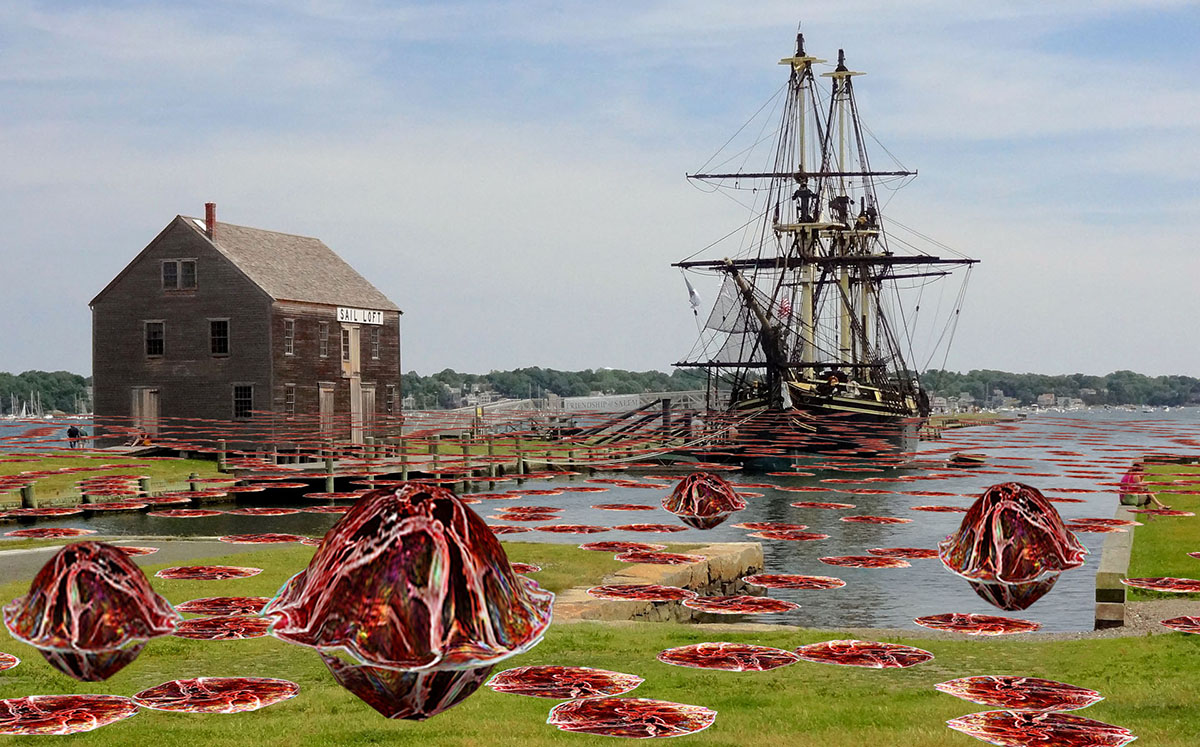 “Gardens of the Anthropocene,” artist’s visualization by Tamiko Thiel, background photo by Rizka/Wikimedia

Get ready for the Pokémon Go of public art installations. Opening May 27 at the Salem Maritime National Historic Site, “The Augmented Landscape” brings together four artists and eight augmented reality pieces—that is, sculptures that can only be seen by means of looking at your smartphone.

Visitors to the installation will use Layar, a free smartphone app, to view the augmented reality works displayed across the nine acre field of the Salem National Historic Site.

“If you’re not looking through your phone, you won’t see anything at all. Virtual reality is when you create an entirely three-dimensional virtual environment. Augmented reality is when you take virtual objects and place them into the real world. That’s the quick definition,” explains George Fifield, Boston Cyberarts Director and curator of the installation. “So these will be virtual objects, sculptures placed onto specific sites by GPS location around the park.”

The installation will feature work from John Craig Freeman, Kristin Lucas, Will Pappenheimer, and Tamiko Thiel. Fifield explains that, in creating pieces for this installation, these contemporary artists were conscious of the historic significance of the Salem National Historic Site as the birthplace of American trade.

“The very first sailing ships that left the continent to go off to Europe and Asia and South American left from Salem,” he says.

Tamiko Thiel conducted extensive research for her contributions to the installation. Her works, which often focus on memory and social issues, have been displayed at museums around the world, including the Centre Pompidou, Tokyo Metropolitan Museum of Photography, the ICA London, and the ICA Boston.

“Working with an institution like the Salem Maritime Museum is a terrific advantage, as they have extensive historical archives and programs to help me in my research, and to provide the deep historical and cultural background information that I like to link to from my AR artworks,” Thiel says.

Thiel grew up in California but traveled to Japan during her childhood with her family; her experiences in both Japan and America inform her artistic work today.

“I remember how the air became heavy with humidity as we got close to Asia, and how we saw the first birds appear again as we got close to land, and how the sights and sounds and smells were so different. This led to a continuing interest of mine: East-West encounters, especially at first contact. Living in the West, where the Far East is seen as an exotic and somehow unknowable world, I like to take the reverse viewpoint I remember from my childhood, when I returned to an America that was strange and empty compared with the density and ancient cultural history of Japan,” Thiel explains.

“Gardens of Anthropocene,” meanwhile, explores the ways in which climate change could affect local fauna. The work was originally commissioned by the Seattle Art Museum, and Thiel met with climate scientists at the University of Washington Center for Creative Conservation to discuss possible implications for both Seattle’s climate and that of the world in general. She repurposed the work for Salem because red algae, the focus of the work, are a threat to environments all over the world, including that of New England. The piece shows animated, swollen red algae littered all over the site, causing red tides.

“We think of globalization as something that is just now happening, but the point is it has been happening forever, so it’s important to understand its history,” Freeman says.

To create augmented reality scenes, he used Photogrammetry, a process by which three-dimensional models are extracted from two-dimensional photographs. He walks around a person, place, or thing, and takes photographs from various angles. He then creates a digital model from his numerous shots of any given scene or object.

“It’s where photography and and virtual reality are kind of colliding, so it’s maybe a new form of photography in a way,” he says.

Boston Cyberarts first exhibited an augmented reality piece in 2001, which exemplifies Fifield’s belief that artists are often some of the first people utilizing new technologies.

“My whole focus as a curator of new media is to see how artists adapt to and redirect, to some degree, cutting edge technology…If there is some exciting and emotive aspect to [the technology], then artists are there before almost anyone else besides the people who actually invent it, and this is another case of that,” Fifield said.