Photographer Elsa Dorfman Finally Gets Her Due in The B Side 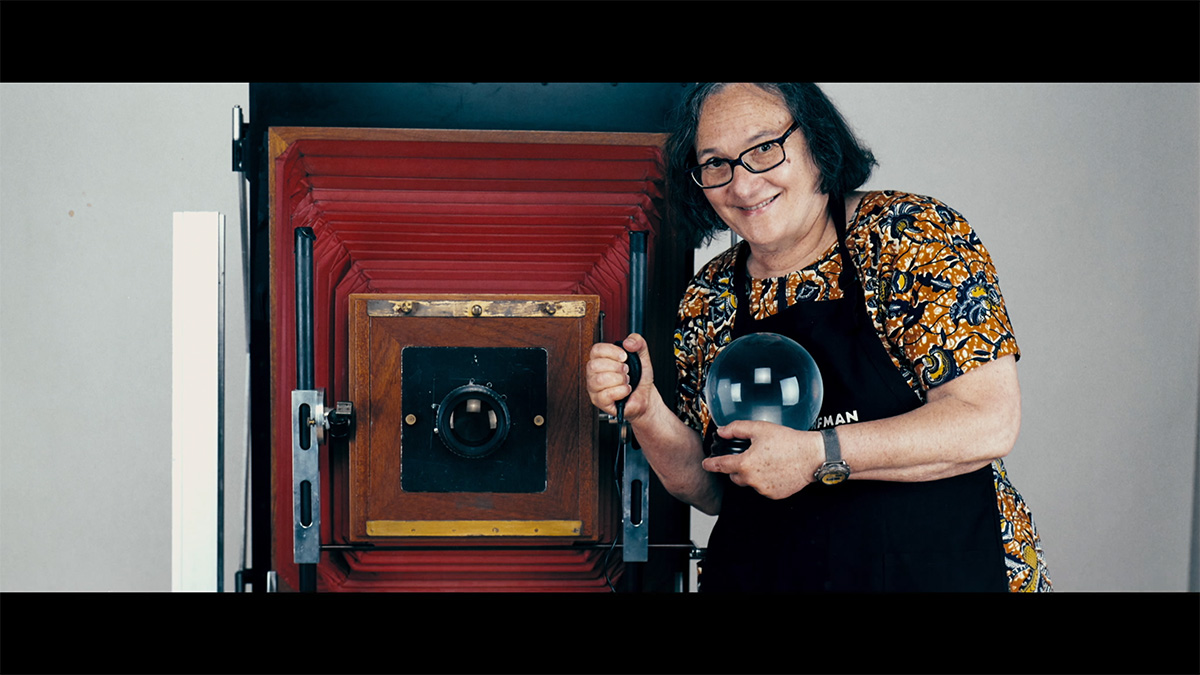 Some documentarians end up with a slightly antagonistic relationship with their sources, who are none too pleased with the resulting product. But Errol Morris, the Oscar-winning director of The Fog of War, is clearly quite fond of his latest subject. His latest film is The B-Side: Elsa Dorfman’s Portrait Photography, about the life and career of longtime Cambridge resident and pioneering photographer Elsa Dorfman. She also happens to be a very old friend of his.

When I ask Morris how he decided on Dorfman as a subject for his latest project, his answer is to deflect attention back over to her to make sure she’s getting her due in the interview. “Well, wait a second, just talk to Elsa for five minutes,” he implores.

But that level of attention doesn’t seem to be something Dorfman craves. When Morris says he’s always wondered why she isn’t more famous, her response is, “See, only a man would wonder that. To a woman, it’s self-evident.”

Dorfman has certainly had her share of hanging out in male-dominated worlds. She was a longtime friend of the poet Allen Ginsberg, and took photos of a variety of members of the Beat scene during her long career. Their friendship is given special focus in The B-Side, along with her chosen medium: the 20 x 24 inch Polaroid Land camera, which, as you might guess, took massive Polaroid pictures of people. These weren’t the little blurry square ones you might remember—they were giant, glossy prints. And Dorfman made an art form of her portraiture with the camera, one of the only ones that existed in the United States.

The film features her telling stories as she searches through her collection of prints, which turns into a sort of history of Cambridge intellectuals, women in photography, and the arc of the Polaroid company. But it’s Dorfman’s skill as a taker of great portraits that shines through.

“It’s sort of the magical connection between me and the person, because when I look at them in the movie I remember all of these sessions,” says Dorfman. “People know if they’re a good picture or not.”

As to that friendship with one of the most famous intellectuals of the 20th century, Dorfman suggests that they just had another one of those magic connections.

“I think there was a lot of self-destruction going on back then, and Allen sensed that I was a nice Jewish girl,” suggests Dorfman, before her defender Morris jumps back in to say, “You are a nice Jewish girl.”

I suggest that, in fact, the nice Jewish girls of the world do good things, and Dorfman agrees. “They’re very, very reliable, and Allen, he just let it be known that I was not to be encouraged to have any drugs or anything like that.”

These were the Beats, after all, so we’re not talking about some light pot smoking. “There were so many drugs. I can remember, drugs came in coffee cans.”

The movie ultimately provides a window into the work of an artist who’s been living in the heart of Harvard Square for decades, who ended up crossing paths with some of the twentieth century’s greatest artists. That casual connection to our nation’s leading intellectuals is part of why Morris says he loves living in Cambridge himself, offering up one of the all-time great explanations of why the city makes for a good home: “It’s nice to know that there’s a lot of smart people around, who have no desire to talk to you. And you may have no desire to talk to them, but there’s some benefit to it.”

Dorfman may continue to be modest about her pictures (even though some of them are in the Museum of Fine Arts these days), but she’s a passionate defender of the film. Morris, at least, is willing to admit that he feels OK about it.

“I’ve often thought that I never like my films. I come closer to liking this film, I think, than any of the others. And there are moments in every film I’ve made—and there’s certainly moments in this film—that I really love,” he explains, before Dorfman cuts him off.

“It’s not perfect,” argues Morris. They’re off again, down a well-traveled path in their mutual admiration society, before he begrudgingly admits: “I think there are a couple of things I did right.”

It’s safe to say that Dorfman agrees with that, at least. She says one of her favorite moments comes near the end of the documentary, outside her workshop. In the movie, she tells a story about her husband, the famed civil rights attorney Harvey Silverglate, and how he gets her balloons for her birthday. Morris was determined to get a shot of the couple walking down a Cambridge street with the balloons.

“I thought, ‘He’s looney,’ because we were going in front of Mass. Ave. It’s a Sunday morning. You know how Mass. Ave. is on Sundays, it’s sort of dead. And we have like 40 balloons, black and red, and Errol saying, ‘Back again! Do it again!’ And actually it’s fabulous,” she admits. “We look like we’re walking on clouds or something.”

The film premieres today at the Kendall Square Cinema.