Jamie Bissonnette will be there cooking. 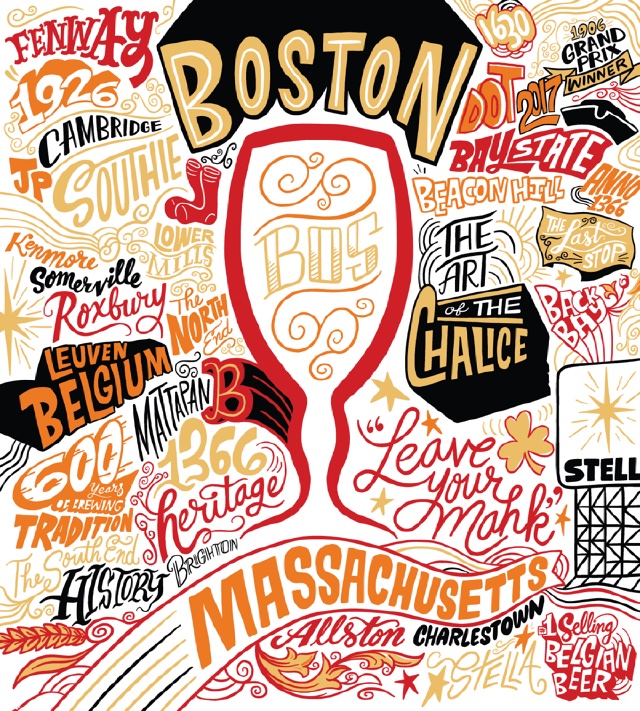 A sneak peek of the mural. / Photo by Chris Piascik

Few of us willingly add an extra responsibility to our daily to-do list. But in 2006, when Boston-based illustrator Chris Piascik decided to assign himself the task of completing one drawing a day, it actually helped to jumpstart his career. While working for a small design company in the South End, he would come home and post one drawing each night to his personal website. After about 365 drawings, or one year, he started to get commissioned work from clients who had seen his drawings. Now, a decade later, he’s published two books of his daily drawings called 1,000 Days of Drawing and 1,000 More Days of Drawing, and he works independently.

This Wednesday, Piascik will unveil a mural in Dewey Square that he painted for Stella Artois’ Art of the Chalice event. The beer company has been hosting similar events all over the country, involving local artists and tastemakers.

“I did a piece for a pop-up through Harvard called Barry’s Shop that they [Stella] saw, which led them to reach out to me. My work resonated with them—it seemed like a good match,” Piascik says.

The mural, which will be on display until September 18, is “a lot of lettering and type that interact with each other and blend into a seamless pattern,” Piascik describes. “I knew I wanted it to tie into the history of Boston and the history of Stella…I pulled in lettering treatments for all of the different neighborhoods of Boston and used illustrative elements to reference iconic landmarks in the city. When I was trying to come up with a color palette, I knew that I wanted to use Stella Artois’ brand colors, and then it just seemed natural to bring in orange to connect to the idea that summer is ending and fall is coming.”

He gave his artwork to a professional paint crew who will then reproduce it on a large scale. Piascik says, “I’ve worked on quite a few large-scale projects and this one is unique because it’s really about the art and the artist…I’m looking forward to seeing it full size, in the environment.”

In addition to the mural’s big reveal, Jamie Bissonnette will provide food and local musician Louie Bello will perform.

Stella Artois presents The Art of the Chalice on Wednesday, August 23, in Dewey Square Park at 600 Atlantic Avenue in Boston from 7 to 10 p.m.