New Public Art Is Coming to the Fenway

It's set to be installed on September 23 in front of Pierce Boston. 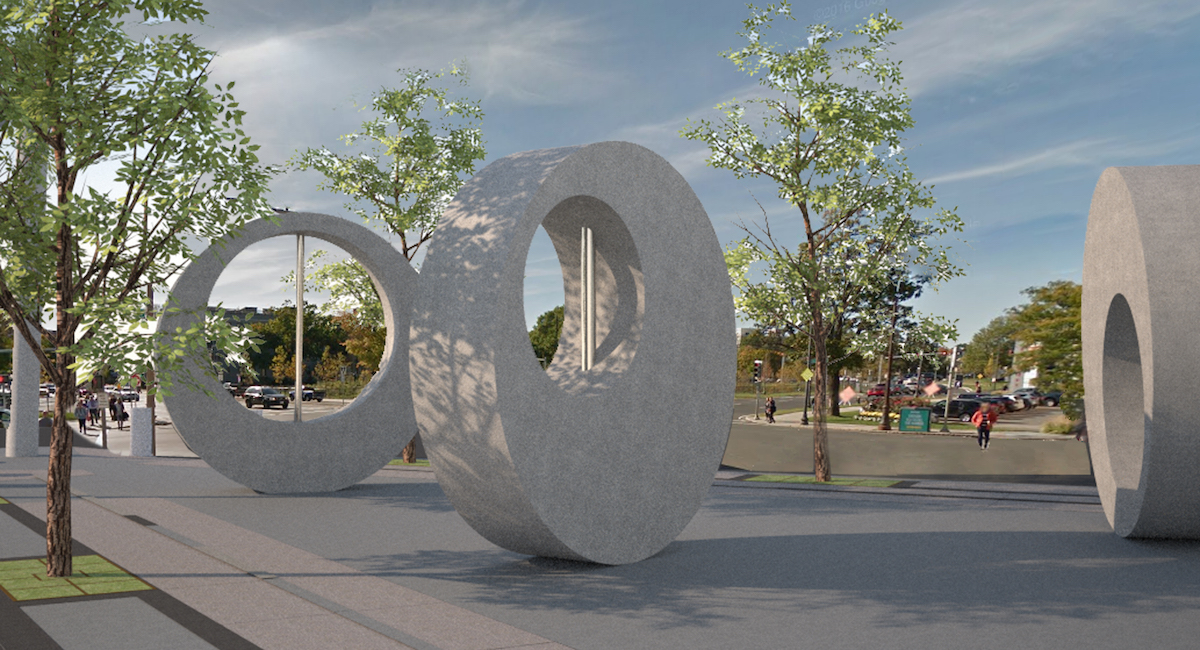 A new permanent public art installation is coming to the Fenway this weekend.

Brazil-born, London-based artist Alexandre da Cunha created “Plaza (Arcade),” a series of three concrete and stainless steel sculptures to be installed in front of Pierce Boston, a new luxury apartment and condo building set to open next year in the Fenway. The piece, resembling three hollow, concrete disks stabilized with metal poles, will go up on September 23.

As an artist, da Cunha typically appropriates existing items, especially when he finds something he considers beautiful, but overlooked. This time, it was sewer pipes.

“These three large-scale sculptures are made of reinforced concrete and metal, and they are part of a series of public sculptures that are being developed,” da Cunha says. “And they are made of industrialized, precast concrete that are used for drainage or sewer pipes.”

The new pieces in the Fenway recall a 2015 exhibition at Chicago’s Museum of Contemporary Art, where da Cunha installed large, circular concrete structures on the plaza outside. Nearby stood a 2013 piece, “Mix (Americana),” a full-scale cement mixer sculpted into circular figures on the inside and painted in red, white, and blue on the outside.

Da Cunha says he didn’t change the original sewer pipe concrete too much for the Fenway installation—he simply had to make sure it was “strong enough to be outside.” The size and structure are also similar to the original pipe.

“Plaza (Arcade)” was conceived nearly two years ago, when Steven Samuels, the developer behind Samuels & Associates, approached Abigail Goodman, an art consultant based in Cambridge. He wanted an artistic structure in front of Pierce Boston, which is scheduled to open in February at 188 Brookline Ave.

Samuels’ team and Goodman looked at the work of around 40 different artists before settling on da Cunha. Samuels was particularly struck by the Chicago installation. He’s excited to see a similar structure installed on the plaza next to the high-rise, glass-framed Pierce.

“It’s obviously concrete, and it speaks to the fact that the Pierce is essentially a concrete building, which is the bones of the building—a major part of the materials that we used to build it,” Samuels said. “The Pierce building is shrouded in this really thin, sheer glass, and we thought the juxtaposition of concrete being exposed in the art against the glass was sort of inside looking out and outside looking in, and so we thought it was very appropriate.”

Da Cunha had never been to Boston before his first invitation from the development firm. Over the course of several visits, the artist became particularly interested in the idea of how his sculptures might transform the plaza. He says he didn’t want to create a “big, imposing” piece, but rather something tied to the space’s existing elements.

“I suppose the main thing for me, with this project, was to work with the material that related to the plaza as well as the environment near the sculpture,” da Cunha says. “Instead of having something made of bronze or very shiny material, I tried to open a more social space, or functional space, that somehow disrupted the traffic or ways that people circulated around the plaza, instead of just one gesture.”

Given its location next to the Emerald Necklace in the Fenway, Samuels thought it was important for the building to reflect the park’s status as a “connective tissue” between commerce centers and art hubs, like the Museum of Fine Arts and the Isabella Steward Gardner Museum.

“What we wanted is a very comfortable landing spot, and we needed significant art that had some massing and some scale and some size to it,” Samuels says. “We hope that this gets ingrained in the public’s heart and starts to become part of the Fenway’s front door.”