The photography and journalism instructor makes a weekly trek from Canada to Kendall Square, and he never forgets his camera. 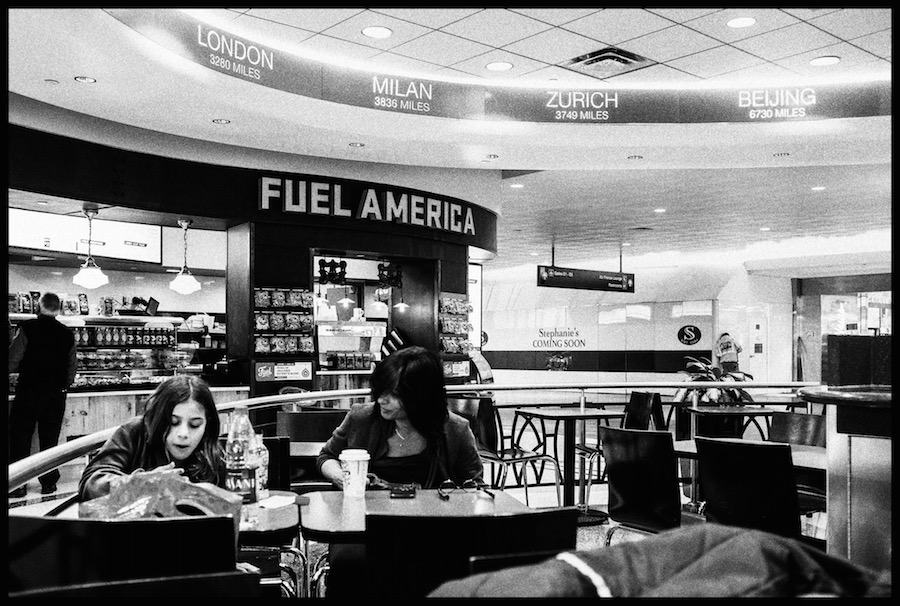 B.D. Colen has a schedule to keep. It’s a damp December afternoon, and the 71-year-old MIT photography and journalism instructor is standing in Area 4, waiting for a table. He sports an oversized gray sweater and circular yellow glasses, and he looks a little weary after having just completed his weekly commute to Kendall Square from his home in London, Ontario.

By car, the journey is a hair shy of 600 miles, but Colen isn’t driving. Instead, he has pieced together a feat of logistical gymnastics that would make the suits at FedEx drool. He’s out his front door in London, Ontario, at 7 a.m. to catch a 7:30 a.m. train that arrives in Toronto at 10:10 a.m. He then jumps on a shuttle bus to Billy Bishop Airport on Toronto Island, where he catches a 1:30 p.m. flight to Logan. It’s 90 or so minutes in the air, followed by a dash through customs, and then on to the Blue Line to the Green Line to the Red Line until he hits Kendall Square. He grabs an early dinner—tonight it’s an anchovy pizza from Area 4—heads to his documentary photography class at MIT, which ends at 10 p.m., and then Ubers to a friend’s home where he rents a room one night a week. The next morning, he’s out of the house early, teaches a science writing class that wraps up at 1 p.m., and then it’s back to the planes, trains and Canadian border crossing. When it goes off without a hitch, he’s in the comfort of his home by 10 p.m.

Most folks would bristle at such a lengthy, complicated commute for what amounts to six hours of work a week. For Colen, though, it has become part of an artistic endeavor that he’s been pursuing one way or another for years. “The endless commute,” he tells me, “is giving me photo opportunities I otherwise wouldn’t have.”

I first met Colen in the summer of 2015. At the time, he was living in Brookline, working at Harvard, teaching at MIT, and had spent the past decade relentlessly photographing scenes from his morning commute on the Green Line and Red Line. He dubbed the project “Alone Together” and his photographs homed in on the many ways in which T riders isolate themselves from their fellow passengers—often by ensconcing themselves in the glow of a screen, and occasionally by engaging in gratuitous make-out sessions.

When I heard Colen had moved to Canada, I was certain he did so in protest of President Trump, a man whom Colen regularly savages on social media. Alas, it turns out that Colen retired from Harvard, married a Canadian woman, and made his way north of the border months prior to Trump’s election. “I started voting in 1968 and every election since I have always said ‘if so and so wins, I’m moving to Canada,'” he tells me between bites of pizza. “But then I actually moved to Canada, and the son of a bitch wins.”

While Colen may have been ready to ditch the U.S., he wasn’t ready to give up teaching. “There’s only one MIT,” he says. Rest assured, though, he’s not doing it for the money. After flights, train tickets, Uber fairs, and food, he figures he breaks even, maybe even makes a few bucks. The biggest perk, of course, is MIT’s health insurance, especially since Colen is not yet enjoying the benefits of the Canadian health system. More than anything, though, the cross-border commute is proving to be an educational lesson. It is forcing him to work with natural light and landscapes in ways he wasn’t accustomed to and pushing him into new territories as a photographer.

When Colen began plotting out how to get to MIT each week, he insists that wasn’t thinking about the photographic potential, nor did he see it as an extension of his days shooting strangers on the MBTA. Now, though, he finds himself shooting everything from folks sipping coffee in Logan to ethereal Canadian landscapes glimpsed from the train window. He’s taken to calling it #TheEndlessCommute and has turned his Instagram into a stream of stunning images from his travels.

Is there a noticeable difference between Boston T riders and Canadian commuters? It’s not a fair comparison, Colen says. The train he takes in Ontario is more akin to an Amtrak than a T car, and airports and airplanes are worlds of their own.

For all his enthusiasm, Colen doesn’t deny that the commute can be exhausting. “It will catch up with me sooner or later,” he admits.

As for how soon? “All I can say is that I’m scheduled to teach next semester,” he says. “But at some point the endless commute will have to come to an end.”

And with that, he squares up his tab at Area 4 and heads for his class at MIT, right on schedule.