The Fra Angelico: Heaven on Earth exhibition will reunite four of the Italian artist's reliquaries for the first time in more than 200 years. 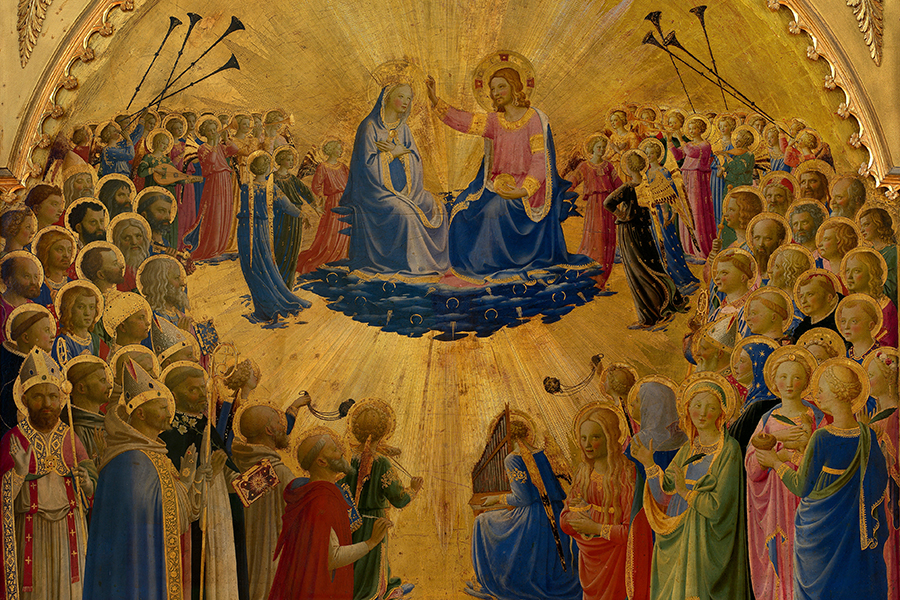 The first Fra Angelico painting to reach the United States had a secret.

In 1899, Isabella Stewart Gardner acquired Assumption and Dormition of the Virgin, one of four works in a series by the Italian Renaissance painter depicting scenes from the Virgin Mary’s life. Angelico, a 15th century friar who specialized in religious frescoes, was renowned for his sweeping altarpieces, and Gardner’s pioneering purchase was one of many that have cemented her legacy as a discerning and important collector.

But for many years, the painting was concealing its full nature. When conservationists took it down from its usual perch in the museum’s Early Italian room for a little TLC, they discovered layers of paint not just on its front, but also on its back. The Assumption and Dormition of the Virgin is actually one of four pieces in a set, and though experts knew the other three works featured depictions on two sides, the consensus was that the painting that hung in the Gardner did not.

And the museum’s conservationists are hardly keeping this discovery for their eyes only. Gardner Museum visitors will soon have the chance to experience the full nature of Angelico’s work in the upcoming exhibition, Fra Angelico: Heaven on Earth. The collection’s arrival presents not just the opportunity to see a familiar painting in a more complete way, but also to view all four pieces in the set together—reunited for the first time in hundreds of years.

The exhibition, curators say, will center on the narrative quality of Fra Angelico’s work while allowing visitors to explore the sacred themes and stories for which the artist is known. In addition to its stunning effect as a collection of paintings, the pieces in the reunited quartet were once used as reliquaries, or containers for holy objects. They may have held the skin, hair, or nails of saints, and their significance goes far beyond aesthetic beauty.

“These paintings were not just paintings. They were objects,” Nathaniel Silver, the collection’s associate curator, says. “They don’t hang on the wall the way we imagine most paintings when we go to a museum. … These were objects of power. The four reliquaries had an importance that transcended their material value.”

Rather than being fastened to the wall, the ornate wood and gold reliquaries—which Silver described as “jewel-like”—will be placed in cases, so visitors can see them from all angles. Instead of staring at a painting on the wall, you’ll be able to walk all the way around the objects, placed in the Hostetter Gallery, to view all sides. Silver says that by bringing the quartet back together, the museum hopes to reinvigorate the work with its previous importance and spirituality.

In addition to the three reliquaries on loan from the San Marco Museum in Florence, the collection will also include two altarpieces and several visual scenes painted by Fra Angelico. The Italian Renaissance painter is celebrated for his pioneering technique and innovative approach to the traditional stories of Christ and the Virgin Mary.

“Many, many painters told these stories over and over again, but he tells them in a new way,” Silver says. “He’s able to use new narrative devices like weight and landscape and human expression in a way that people hadn’t tried before—and they catch on. … He had a ripple effect on the history of art.”

“We are thrilled to present the work of this extraordinary Renaissance artist and storyteller,” Peggy Fogelman, the Gardner’s director, said in a press release. “Gardner was the first collector in the United States to acquire a Fra Angelico, when she had already begun plans for her boldly conceived museum. It is only fitting that these works be reunited here in Boston for the public to enjoy.”