Fifteen of them will be installed on Seaport Common from February to April. 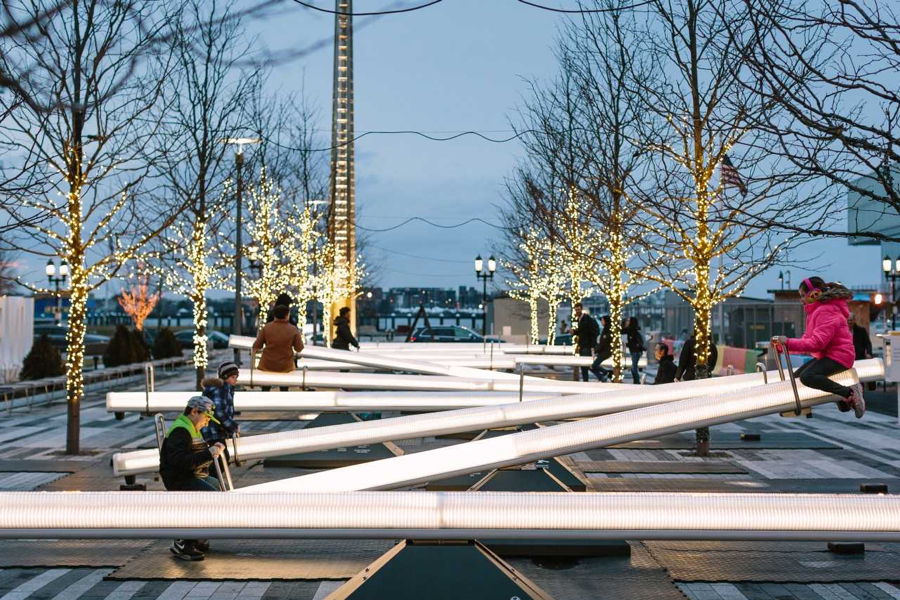 In an effort to make Seaport Common festive, bright, and interactive—while fighting the winter blues—the park will soon welcome a set of 15 illuminated musical seesaws.

The augmented playground toys, which make up a traveling exhibit called Impulse, glow with white light as users ride them, and each emits a unique series of tones. They get brighter, and the notes play more quickly, as users speed up their seesaw-ing.

This is only the latest stop for Impulse seesaws, which have been installed in cities around the world, including in London, Brussels, Chicago, and Montréal. They were also a hit in Harvard Yard last year, where they were placed as part of a celebration of Harvard-affiliated artists. Sheppard and Mason White, also a Lateral Office co-founder, are both alums of Harvard’s Graduate School of Design.

This latest one, dubbed Seaport x Impulse, is slated to be open to the public on the Seaport Common (near District Hall) from February 16 to April 16.

The project comes courtesy of WS Development, a firm responsible for developing a big chunk of the Seaport. Impulse, says Yanni Tsipis, WS Development’s senior vice president, “speaks to the Seaport’s innovative and collaborative spirit while offering an opportunity to bring the neighborhood together.”

Impulse  is a result of a collaboration between Lateral Office, Montréal’s CS Design, Generique Design EGP Group, with sound design by Mitchell Akiyama and Robocut Studio.

Update: There are no longer plans for a beer garden during the installation’s opening weekend. Organizers say they hope to hold an outdoor celebration with a beer garden at some point—possibly in March—but will need to secure permits first.