And in case you're wondering, he wears a size-16 bowling shoe. 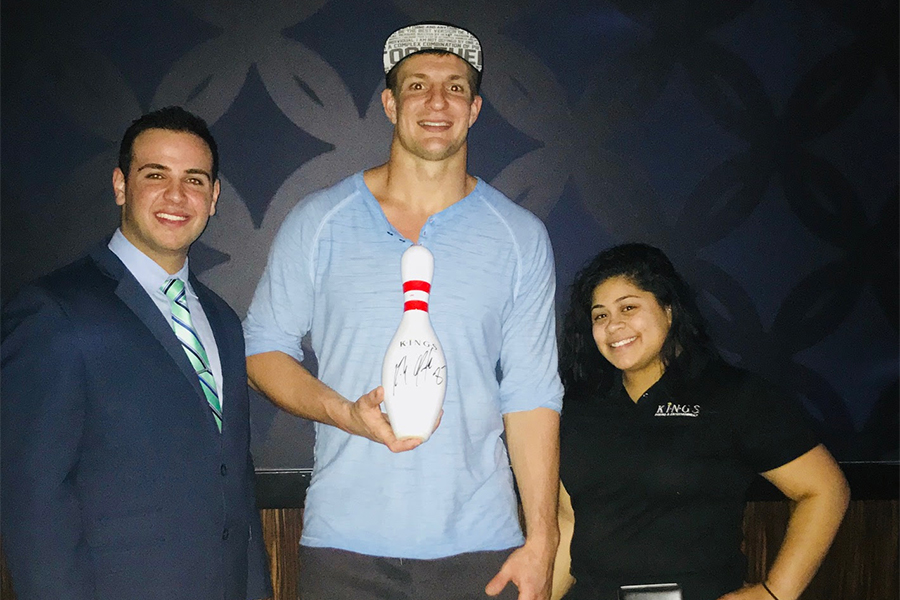 It’s been a rough two weeks for Rob Gronkowski: First, the Eagles upset his New England Patriots in the Super Bowl. Then, the tight end’s house got robbed. Word is now he might retire to pursue a career in acting.

Apparently, when times are tough for Gronk, he lets off some steam on the bowling lane. Last night, Gronk and three friends—including his brother Gordie—went to the new Kings Dining and Entertainment in the Seaport and bowled four games.

Gronk reportedly asked for a pair of size 16 bowling shoes—good to know—then bowled four games. The group shared a barbecue pizza, and an appetizer sampler of buffalo chicken wontons, spring rolls, and mac and cheese bites. If you’re thinking the prominent party boy had a couple beers then smashed the cans on his head, think again. Number 87 drank water all evening, per our source at Kings.

The Back Bay-born dining and entertainment company is popular among Boston athletes. The Celtics’ Marcus Smart has hosted events there for his YounGameChanger Foundation, and on their website, Kings shares photos of Tom Brady, Vince Wilfork, Doc Rivers, Rajon Rondo, Greg “Big Baby” Davis, and many more celebrities.

No word on whether Gronk and Red Sox outfielder-cum-professional bowler Mookie Betts are planning a match.