A Year Later, the Chinatown 3D-Printed Rooster Artist Sees Project as a Success

An ambitious art project to celebrate the Chinese New Year spit out out more than 2,000 tiny sculptures. 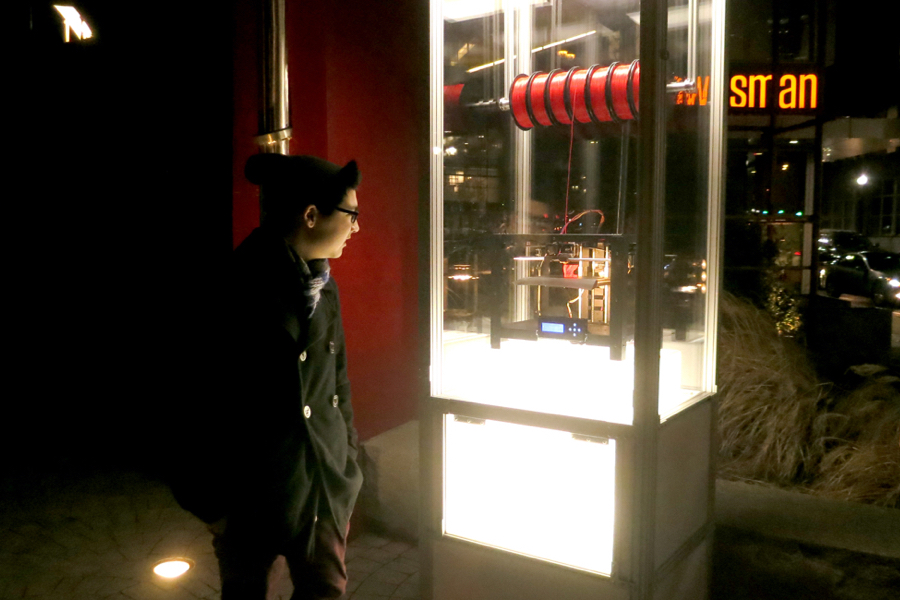 One year ago, Somerville artist Chris Templeman debuted a public art project in Chinatown with an ambitious goal: Create 2,000 little plastic red birds with an automated outdoor 3D printer by the end of the Year of the Rooster.

And now, on the eve of the Chinese New Year, he says he succeeded. After plenty of bumps along the way, the machine, dubbed Make and Take, was able to build and then spit all of them out, vending machine-style.

It wasn’t easy. Because it was exposed to the elements, the machine failed a lot, often with bizarre and beautiful results. So let’s just say Templeman has learned lots about the delicate and time-consuming art of maintaining an outdoor, continuously operating 3D-printer.

It was worth it, though, he says. He was pleased to see his creation become a thing, as neighbors and commuters began checking the machine regularly to see if they could walk away with a rooster of their own. “It was really interesting that I was able to be a tiny part of people’s routine,” he says.

After hearing from people who were never able to get there at the right time to take one home (each took several hours to make), he and the Rose Kennedy Greenway, which runs Chinatown Park and commissioned the project, decided to hold a special giveaway. They arranged to make a batch of nearly 200 roosters ahead of time and give them all away at once. There was a big line, he says, and they ran out in less than an hour. “People were like, ‘I’ve been waiting all year to get one!'” he says.

My heart is filled with so much love for all the support I’ve been given this past year towards #makeandtake If you haven’t snatched a rooster yet you have one more chance, tomorrow 12-1 on the Greenway. Check @rosekennedygreenway for more details. #roosterlove #publicart #bostonevents #meettheartist #greenway #greenwayart

Happening NOW! Join us in Chinatown Park for our Make and Take Rooster Givaway with artist Chris Templeman! 🐓 pic.twitter.com/pD2EcaUE8J

The installation was removed earlier this week, and a new one honoring the Year of the Dog has taken its place.

Part of his creation will live on, though. Templeman says one of his plastic roosters will be included in an upcoming traveling exhibit at the Museum of Fine Arts (the design he used for his roosters was based on a scan of a sculpture from the MFA’s collection).

In the meantime, if any other artists want to follow his lead and try something similar, he’s happy to help.

“It’s a strange expertise I find myself having,” he says. “If somebody happens to want to print lots of things outdoors I kind of know how to do that now.”