Claudia Rankine Switches from Poetry to Playwriting with The White Card

ArtsEmerson is presenting American Repertory Theater's production of the play. 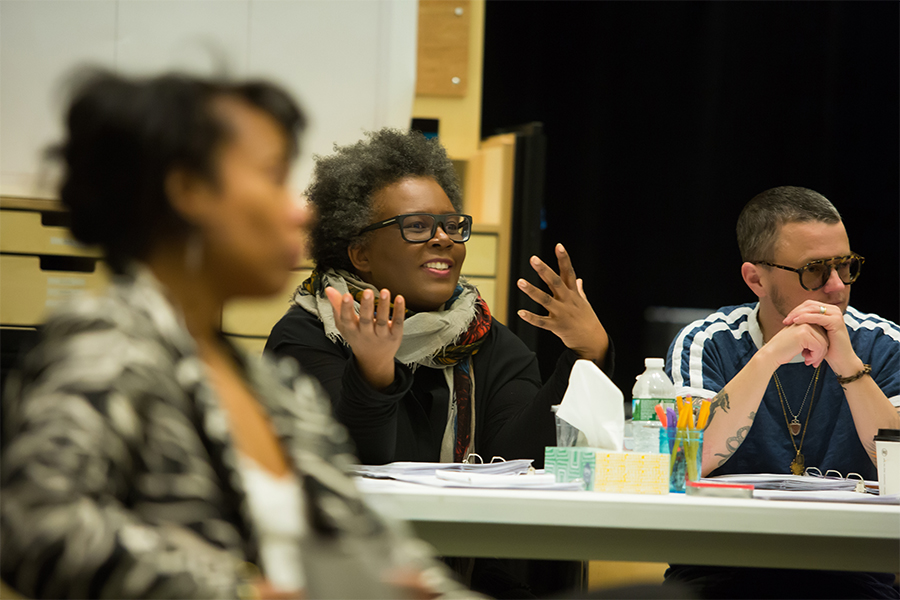 Sometime on the tour for her bestselling book Citizen: An American Lyric, the poet Claudia Rankine began to think that the occasionally contentious question and answer sessions she was holding might make for good dramatic material.

“Often someone would ask a question, and there wouldn’t be time to answer it, or the audience members would get upset because they would think the person asking the question was being rude,” she says. But where some people might feel some discomfort in that situation, to Rankine it meant something more substantial. “I began to think, you know, we really don’t know how to talk about race in a sustained way. And it would be lovely to have that conversation.”

So she took the opportunity to try out a new medium. While Rankine is a widely fêted poet, with a MacArthur Foundation fellowship, a National Book Critics Circle Award, and a NAACP Image Award, there was something about this project that suggested it would work for the stage. The resulting play, The White Card, is having its premiere in Boston through a joint production from ArtsEmerson and the American Repertory Theater. It follows a dinner party, wherein issues of race come up for a black artist in company with a group of white people. And that set up is very intentional, says Rankine.

“I think we are often in situations where whiteness is the institution,” she explains, pointing to the American justice system or hiring practices as places where that dynamic frequently comes into play. “How do you turn that reality into a metaphor? For me, in this case it was to flood the stage with whiteness and to have the character of the black woman have to negotiate the different ways in which whiteness has to be negotiated.”

Despite her many accolades, stepping into the role of a playwright was still a big change. Luckily, the A.R.T.’s artistic director, Diane Paulus, decided to direct the show. As Rankine puts it, “She just makes you better. And anybody who makes you better, you should hang out with them.”

Surrendering your work to someone else’s artistic vision is, obviously, very different for someone used to working in a more solitary way, but Rankine says she has no such concerns with Paulus.”I really feel like she is not only my champion, but more importantly, the champion of the work. She is out there making the work do the thing it was meant to do. And as the writer you can only be grateful for what it takes for her to first understand the intention and then communicate the intention.”

Race might seem like a topic that could be hard to have people discuss naturally, but Rankine says that’s always the goal when she’s writing about race. “These ideas have very specific language in academia, and how do you bring it into a poem or how do you turn it into an essay? So I feel like I’ve always dealt with that challenge.”

With The White Card, the challenge is making that language “just fall out of people’s mouths,” as she puts it. “Where can you not go in terms of the language? So that’s been the challenge, but the challenge is the glory of writing. It’s a good one, and when you succeed or think you’ve succeeded, that’s where the real pleasure comes.”

The show runs through April 1, and Rankine will also be participating in a conversation about the show on March 4 with P. Carl, the dramaturge who worked with her on the project. It’s part of the Citizen Read project, which seeks “to activate a public dialogue on race and identity in America.”