The quarterback also ate a strawberry and gave the comedian an arm massage during a Late Show appearance. 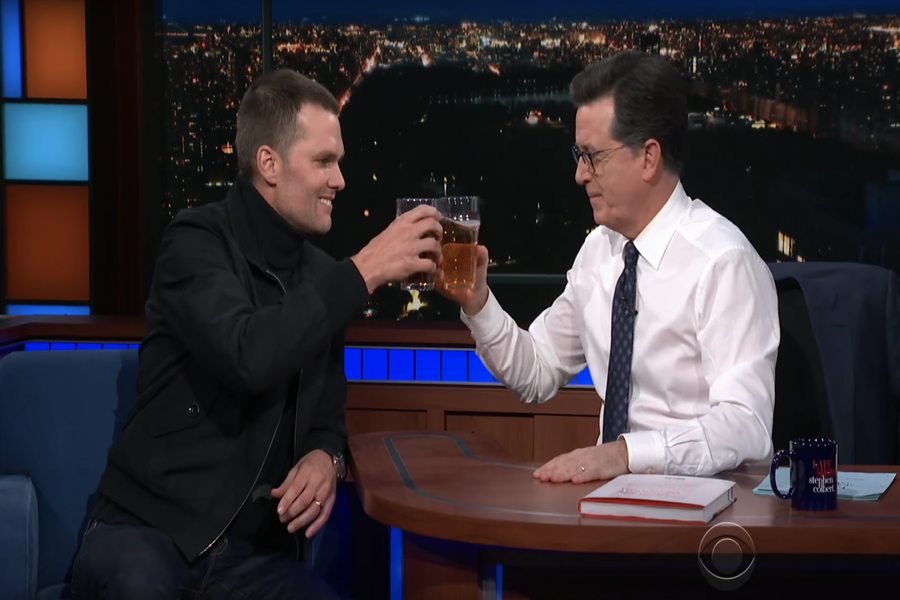 Tom “the Storm” Brady has gone off the rails.

In a Monday night appearance on The Late Show with Stephen Colbert, the five-time Super Bowl champion let his newly-cropped hair down in a truly wild fashion. Not only did the 40-year-old TB12 eat his first strawberry ever, but he also gave Colbert a vigorous arm massage and chugged a beer. Like the Pats offense charging toward the end zone with two minutes left on the clock, the Brady-Colbert interview covered a lot of ground.

Things started off normally enough, with Brady explaining that he’s dealing with the Super Bowl loss as any sane person would (by crying). But as often happens when someone utters the word “pliability,” things took a turn for the strange when Colbert starting prodding the quarterback about the TB12 method. One minute the comedian was learning about hydration, and the next, he was getting what appeared to be a very vigorous arm massage from the greatest quarterback of all time. Brady absolutely went to work on Colbert, because Touchdown T doesn’t do anything half way.

With lotion on his hands, Brady used self-described “long and intense” strokes to ease Colbert’s tightness. If the redness of the host’s arm is any indication, Brady could have a second act as a masseuse if the whole football thing doesn’t work out.

#TomBrady helps @StephenAtHome ease some of the tension in his arm with a massage. #LSSC pic.twitter.com/3b3Uxku4eN

The conversation then turned to food, and Colbert asked Brady about the true tragedy of his life: a decided absence of strawberries. After the quarterback explained that he’d never eaten the sweet song of summer because the smell grosses him out, Colbert summoned a bowl of strawberries for Brady to sample. Despite the fact that several 300-pound men regularly charge full-speed at the calm and collected quarterback, Brady looked completely distraught over the idea of eating the fruit.

But in a feat of of inspiring strength, the G.O.A.T. proved his mettle and took a bite of his first strawberry ever.

Notable strawberry hater #TomBrady eats one for the FIRST TIME in his life! 🍓#LSSC pic.twitter.com/M5fKwGDCq3

Brady’s competitive spirit came through at the end of the interview, too, when he and Colbert raced to chug beers. With a glint in his eye, a smirking Brady told the host that though he doesn’t drink much now, he was “a pretty good beer chugger back in the day.” And soon enough, like a scene out of a University of Michigan frat house, the Late Show audience swelled with chants to chug, and the race was on. Brady crushed it.