When the Canadian singer visits Boston this week, she'll be revisiting the album that made her an international star. 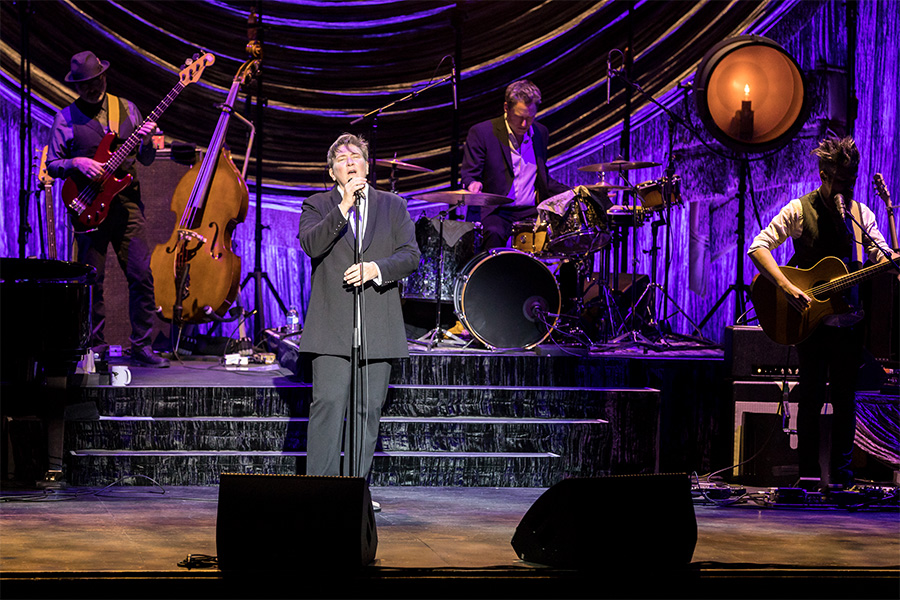 As k.d. lang takes the Orpheum stage this coming Thursday, she won’t be promoting a new album, but rather the entirety of her 1992 album, Ingénue, in sequence. Hard as it is to believe, it’s been a full 25 years since that double-platinum album was released, making lang a ubiquitous phenomenon, earning her a Grammy for the Top 40 single “Constant Craving,” getting her an episode of MTV Unplugged, and landing her on the cover of national magazines.

To celebrate the quarter-century anniversary, lang has released a deluxe edition of the album that includes a bonus disc of that MTV performance, and has hit the road on what is aptly dubbed the “Ingénue Redux Tour.” After last year’s legs through Australia and her native Canada, she’s been hitting theaters throughout the United States, earning raves for her band’s live replication of Ingénue’s lush melodies while her soaring alto expresses the deeply yearning lyrics. Back then, though, she had no idea how it would transform her career.

“Ingénue was a success and it was a surprise,” lang says. “It didn’t come immediately, and we weren’t sure what would transpire. We were überaware that it was a dark, insular record, and it was the opposite direction of music at the time like Nirvana and Madonna, and away from the country music I’d been doing. In fact, we got some bad reviews of it from the get-go, and I remember thinking, ‘Oh well.'”

In fact, lang’s career was hardly minted overnight by Ingénue‘s eventual success. With her earliest albums, such as her debut, A Truly Western Experience from 1984, and Angel with a Lariat from 1987, she was best known as a quirky cowpunk singer from Alberta, who happened to have a remarkable voice…if you could find her albums in the United States.

Her first breakthrough only came in 1988 with Shadowland, which she recorded with legendary Nashville producer Owen Bradley and featured a “Honky Tonk Angels’ Medley,” sung with Loretta Lynn, Brenda Lee, and Kitty Wells. Shadowland went gold, and so did the follow-up, 1989’s Grammy-winning Absolute Torch and Twang, with its dark-horse single “Trail of Broken Hearts.”

But then came the first and biggest controversy that threatened to derail her burgeoning career. A devoted vegetarian and animal rights activist, lang also grew up in Canada’s cattle country. So when she did an anti-meat ad for People for the Ethical Treatment of Animals (PETA), she faced fierce and threatening opposition and even radio bans of her music. “I had a huge controversy with PETA in Canada,” lang says. “It caused a great deal of anger and I was getting bomb threats at the record company. People were burning records on my mother’s front lawn.”

So when she released Ingénue a few years later, lang was aware of the tenuous position for her career. First, she had just angered audiences in the big-sky country that had always claimed her as one of their own. Then there was the fact that Ingénue wasn’t even country, but a sophisticated example of orchestrated adult pop that took more than 64 tracks to mix into a tapestry of sound. With the risky shift in genre and the lasting effects of her political stance, lang knew that her new album was a gamble all the way around.

But that was nothing compared to how it affected her personal life. As the album and single soon took off, critically and commercially, lang decided to come out as gay in an interview with The Advocate. “Obviously, it’s my most successful record, so it was a gamble, and we deliberated about it for a long time,” lang says. “But it became a moment in the trajectory of accepting the LGBT community, and that’s an important thing to acknowledge, and I know when people talk to me about Ingénue, they relate to me their personal stories and that makes me very proud indeed.”

Ultimately, however, her coming out was nothing compared to the PETA confrontations. “I guess the anger quotient for me was dissipating,” lang says. “Coming out was kind of a piece of cake. I was concerned about my mother and my family having to do deal with those things again, but it propelled into this positive thing, and you know, it was actually an antidote to what came before.” By August 1993, she was on the cover of Vanity Fair, getting a straight-razor “shave” from supermodel Cindy Crawford.

While this heady time around Ingénue was when lang shone brightest on the charts, she has gone on to become as much a musical institution as a pop-culture icon, with eight more excellent studio albums. She easily resides in the pantheon of premiere Canadian singer-songwriters alongside Joni Mitchell and Neil Young, and even more, she’s a marquee interpreter of other people’s songs, especially on 2004’s Hymns of the 49th Parallel. That cover album of classics by north-of-the-border legends like Mitchell, Young, and Leonard Cohen features her majestic take on Cohen’s “Hallelujah,” which she later sang at the opening ceremonies of the 2010 Winter Olympics in Vancouver. Her version has graced the Games ever since, this year scoring the short program by the silver medal–winning Chinese pairs figure skating team. “There were a couple bad edits in their version,” lang laughs, “but I’m proud to have any edit in the Olympics!”

“Hallelujah” will be on lang’s set list on this tour, along with Ingénue’s 10 songs and perhaps some selections from her most recent albums, Sing It Loud and case/lang/veirs, her eponymous collaboration with fellow songwriters Neko Case and Laura Veirs. In short, there will be at least 25 years of musical history presented on stage, but then it may be a while before she figures out her next chapter. She says she’s currently appreciating a slower pace while caring for her elderly mother, who steadfastly supported her in her challenges and triumphs.

“I’ve been in a holding pattern for five or six years,” lang says. “To be honest, I don’t feel like I know where I’m headed musically. I feel like I’m one of those flies doing that weird geometric pattern in the room. [laughs] My whole life on the road I’d be thinking and driving and thinking some more that I should spend more time with my family and cooking and enjoying my life. Now that I’ve been hanging out with my mom, I’m thinking ‘Oh my god, I have to get back on the road…'”

So fans at the Orpheum should cherish lang’s breathtaking voice in person, because who knows exactly when she’ll come around again. And when they do, they should bear in mind lang’s own words on her approach to singing. “If you can find that complexity, that spectrum of intellect and real emotion and truth and sarcasm, whatever is there, and then mix them into one thing, that’s how you extrude the truth out of a song,” lang says. “And hey, I’m a sucker for beauty.”