Including the Boston Marathon, Free Cone Day, the Cambridge Science Festival, and more. 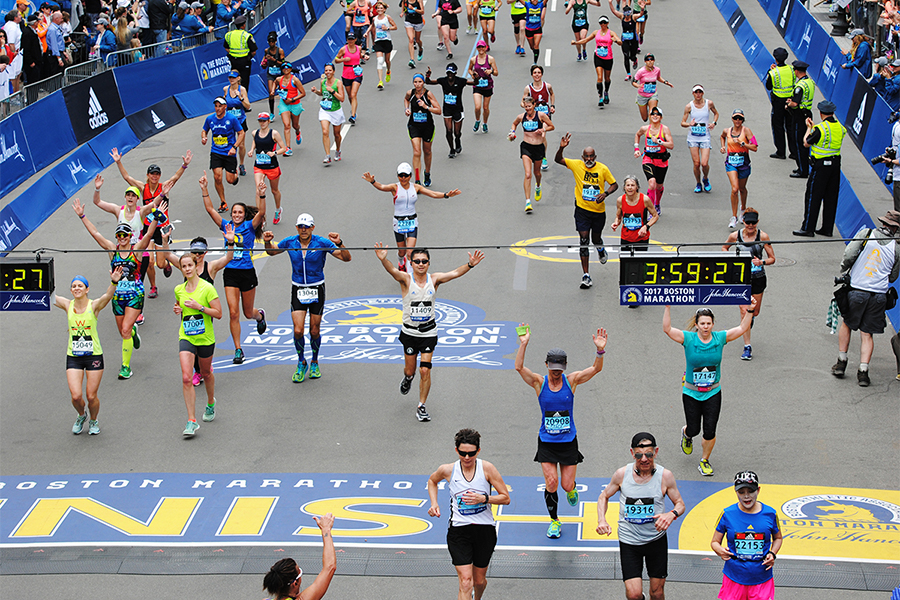 This family event is hosted by the Mandarin Oriental Boston in their hotel lobby on Easter Sunday. Kids can hunt for eggs while parents indulge in some free pastries from Pastry Chef Robert Differ. It’s the perfect family fun activity to do before Easter dinner. There will be two hunts, one at noon and the other at 2:30 p.m.

A variety of events will be taking place across Boston in celebration of design. The theme for the fifth annual design week is Now, New, Next. Events will highlight everything current, new, and what we can expect from the future of design in many different fields. Topics will range from designing the structure of Boston, sustainability in design, student art shows, professional networking events, architecture, and more. There are events for every interest level, whether your career is in design or you just fancy some good interior decorating. Events will be held at the Museum of Fine Arts, SoWa, the Boston Design Center, WGBH, and more.

There is no shortage of ways to celebrate National Poetry Month in Boston. This four-day festival starts off Wednesday night with a high school poetry slam competition at Fisher College. The events continue on Friday, Saturday, and Sunday with two open mics, various performances, and lots of opportunities to meet and talk with established poets. Weekend events will be held at the Boston Public Library and the Community Church of Boston. 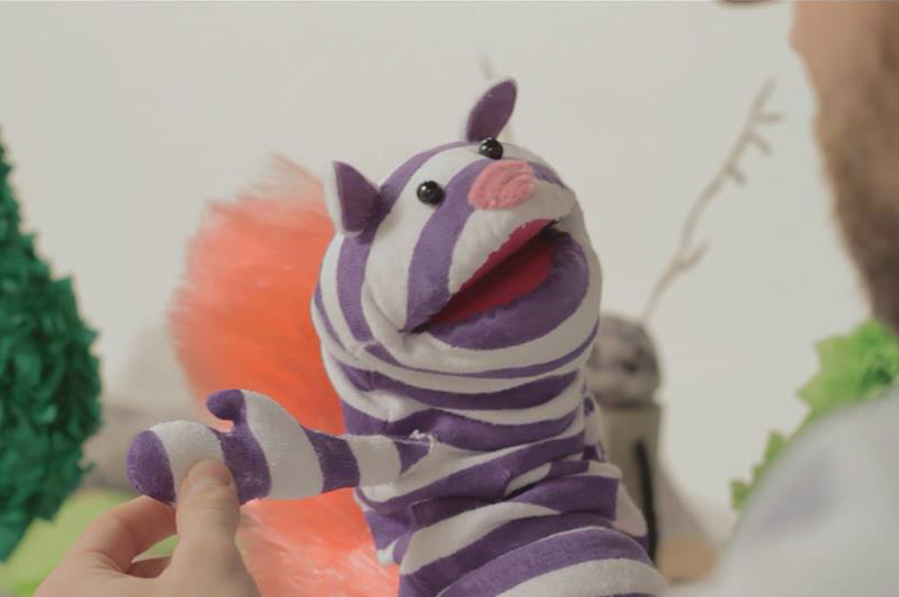 Puppet Film Night at the Somerville Media Center will feature various short films, including “All This Joy” by Jesse Garrison. / Photo provided by Handmade Puppet Dreams

The Boston Area Guild of Puppetry and the Somerville Media Center are collaborating for this family event featuring independent short films using puppetry. The films shown—Mountain Goat by Jamie Shannon, Mother Hubbard by Paul Andrejco, Treeples by Sarah Nolan, and All This Joy by Jesse Garrison—use varying types of puppets in their films.

The artists showcased at La Galeria are New England based, with Latin American origins or heritage, who focus on visual art production. Their work is described as innovative and contemporary. The exhibit is titled EMERGENTE and the artwork is mostly photography, sculptures, and objects.

If you’re going to wait in line for something, it should be this. No matter how far the line goes down Newbury Street, a nice scoop of Ben and Jerry’s ice cream is waiting for you at the other end. Scoop shops are now also serving up low-calorie flavors with 160 calories per serving. Flavors like chocolate milk & cookies, caramel cookie fix, and P.B. dough are all part of the new Moo-phoria brand. 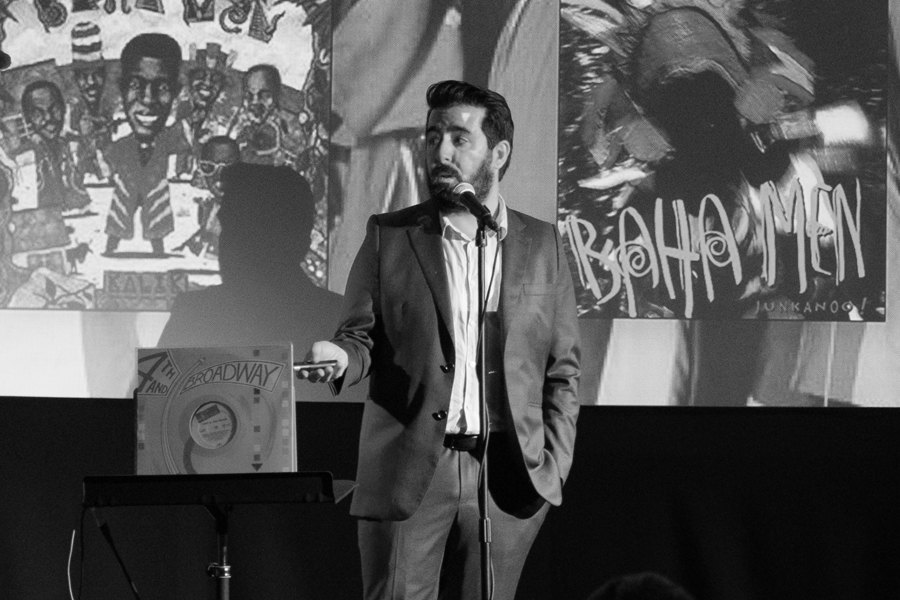 Artist Ben Sisto at his showing of Who Let Who Let the Dogs Out Out. / Photo provided

Who Let Who Let the Dogs Out Out?

Artist Ben Sisto has over 250 pieces of memorabilia and artifacts relating to the Baha Men’s song that you can never seem to get out of your head, “Who Let the Dogs Out.” A self-proclaimed leading expert on this catchy tune, Sisto says, “This will be, hands down, the best event taking place at state-funded arts college in Boston on Wednesday April 11, 2018 between the hours of 6:30 p.m. and 9 p.m.” 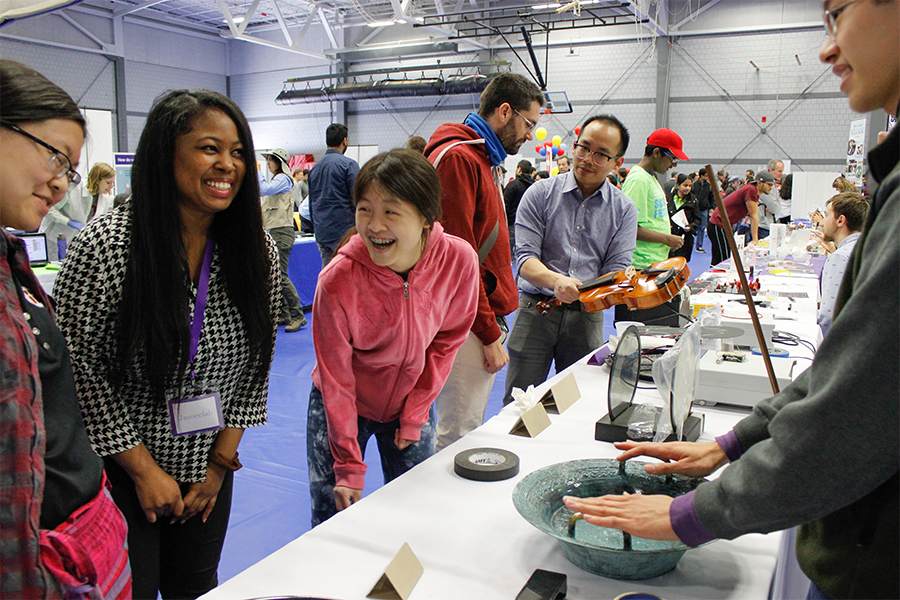 The Cambridge Science Festival runs from April 13-22 with some free events, including a tour of Boston bridges, a 3D printing event, and the story of a Hawaiian squid. There are also free admission days to the Harvard Museum of Natural History and Harvard’s Peabody Museum, and an open house of the Blue Hill Observatory. The events are for kids, adults, and families alike.

Performing the Present: Audra McDonald and Oskar Eustis in Conversation

Tony, Emmy, and Grammy-Award winner Audra McDonald is the recipient of the Eugene McDermott Award in the Arts at MIT for her exceptional gift of performance. According to their website, the award is “bestowed upon individuals whose artistic trajectory and body of work indicate that they will achieve the highest distinction as leaders in their fields.” McDonald is the only person to win a Tony Award in all four acting categories. She’ll also be performing with the Boston Pops this year on June 24, though that, sadly, is not free.

It’s every Bostonian’s favorite Monday of the year. There are 26.2 miles of prime viewing spots, but one of the best has to be in that last stretch of right on Hereford, left on Boylston. This year’s marathon will include a tribute to the 1918 Boston Marathon. A century ago, the annual Boston Marathon took a detour in its usual proceedings and hosted a military baton race from Hopkinton to Boston. Ten-man teams ran the course, passing a baton at various points. This year, the B.A.A. selected 16 people with ties to the military branches and the towns the marathon runs through.

The Boston Marathon may have more appeal on Patriot’s Day, but it’s actually in honor of the first battle of the Revolutionary War. Wake up bright and early on Monday morning to witness a reenactment of the war’s first battle, right where it all went down. The battle will be performed by the Lexington Minute Men Company and His Majesty’s Tenth Regiment of Foot. There are events taking place on the Battle Green all weekend, including various Revolutionary War era tours. 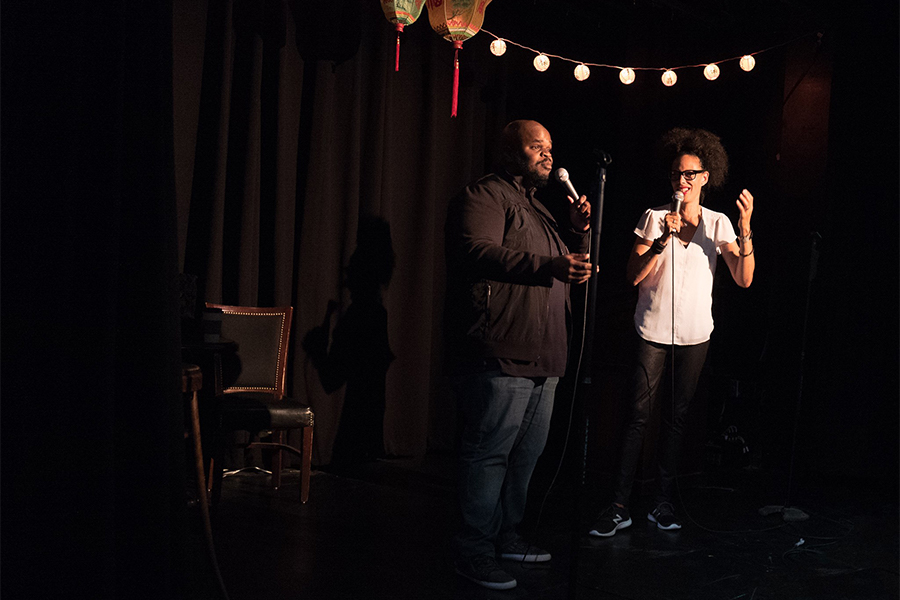 Comedians Bethany Van Delft, Nick Chambers, and others tell stories of awkward encounters with celebrities, crushes, and idols. The audience votes on their favorite, and the comedians act it out. As Van Delft says, “We ALL have stories of being super awkward in front of someone who holds importance to us, that’s what makes this show so much fun!” And it’s more than just a stage show—Starstruck will soon be a podcast.

This show from Improvised History will revolve around the 1920s. The audience selects a passage from a history text and then the show begins, with the comedians relying on their historical knowledge to create characters and situations. The group usually performs their show once a month, but this showing is a little different. A group from the historical comedy podcast Anachronismo! will be doing a live recording of an episode during the first act of the show. Then, Improvised History will take the stage with an improvised play. Tickets are free, but space is limited.

This two-day event will feature food booths, performances, raffles, and a kids’ corner. The festival is meant to share Japanese culture with the city of Boston. The festival began in 2012 and attendance grows rapidly each year. According to their website, 60,000 people attended the festival in 2016. There will be singing and dancing performances on the main stage showcasing modern and ancient Japanese culture. The festival will also be home to a Cosplay Deathmatch and Cosplay Fashion Show.

A Conversation with John Lithgow

He played an alien in 3rd Rock from the Sun, the villain in Shrek, and currently he’s Winston Churchill in Netflix’s The Crown. Learn all about the life of actor John Lithgow when he speaks at the JFK Library. Lithgow will be discussing his impressive career and the importance of the arts.