Padraig O'Malley has worked for years to resolve conflict. 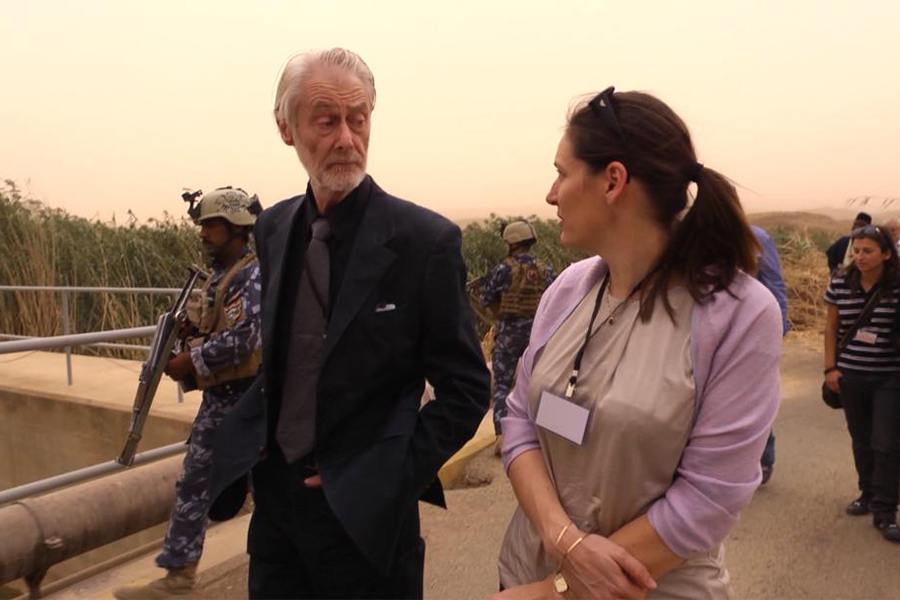 Somewhere in Boston, under the dim light of a church basement, in a thick Irish accent, Padraig O’Malley – longtime owner of the iconic Cambridge pub the Plough and Stars – looks past the camera and begins to share, “My name is Padraig, I’m an alcoholic. It’s been quite sometime since I shared, ’cause I got tired of telling my own story.”

Tired or not, that’s just what local Brookline filmmaker James Demo and his co-producer John Mulrooney have asked him to do for their latest documentary film, The Peacemaker. Specifically, they wanted to know just how the enigmatic 75-year-old Cambridge resident and former ne’er-do-well became the unsung hero of peace processes the world over.

Over five years, crewmembers trailed O’Malley to locations such as Nigeria, Kosovo, Iraq, South Africa, and the halls of Alcoholics Anonymous. After two years on the festival circuit, where it won five awards and a recent nod as a New York Times Critics’ Pick, the film will be showing at the Coolidge Corner Theatre as of April 13.

The film chronicles O’Malley’s transition from patron to owner, drunk to sponsor, and ultimately immigrant to international negotiator. Originally from Ireland, O’Malley emigrated to Boston on a Fulbright scholarship in 1967. He graduated from Tufts in 1970 and enrolled in the economics program at Harvard.

After just one semester, however, his drinking habits—which had been spirited to begin with—spiraled out of control and he dropped out. “I virtually drank around the clock, I lived across the street [from the Plough and Stars], so my life consisted of crossing Hancock,” O’Malley explains to me.

O’Malley wouldn’t find long-term sobriety for nearly 30 years, but even amidst the throes of alcoholism, he knew that he wanted a piece of the Plough, eventually purchasing the housing building and working his way into 50 percent ownership of the bar.

That’s when things started to really change. In 1975, at the height of “The Troubles” in Northern Ireland, O’Malley had a “colossal and simple idea”—why not bring all parties together in one big forum? With no more than that idea in mind, he set out to bring it about. O’Malley invited opposing Irish paramilitary leaders to the Plough, thus establishing the bar as an inebriated hub for international diplomacy. “You can [always] find a relationship with a few jars in, ya’ know?” Glenn Barr, former Irish Paramilitary Leader, told the filmmakers.

For O’Malley, the meeting was just the start of his more than 20-year involvement in the conflict—a run that included such highlights as the Arniston Conference in 1997, in which Nelson Mandela aided in negotiations between Irish unionists and nationalists, culminating in the Good Friday Agreement. Over the years O’Malley’s work as an international negotiator expanded. He spent over a decade living in South Africa, chronicling the transition from apartheid to democracy via thousands of hours of archived interviews, which can now be found at the University of Witwatersrand, South Africa, as well as locally at UMass Boston.

During the democratic transition of Iraq in 2007, O’Malley opted for a new method of negotiation prompted by his newfound sobriety. He began adapting the core principles of Alcoholics Anonymous to his work—just as one alcoholic is best fit to help another, one formerly divided society is most suited to aiding in the peaceful transition of another. That idea grew into a sort of philosophy. “You could say my work would not have been possible if I hadn’t been an alcoholic,” he told me. “Both in recovery and reconciliation processes, the aim is to change behavior. Ending violence in a conflict does not end the behaviors that brought about that violence.”

As O’Malley explains it, addiction, just as with the reconciliation process, constitutes a necessity for active and ongoing change. And in many ways, O’Malley exchanged one addiction for another. “I’m a workaholic: If I’m not working, I’m anxious,” he explains, “and chasing the object of your addiction is the most important relationship you have.”