After a 17 Year Absence, the Super Troopers Are Back

Broken Lizard returns to the wilds of Vermont with a sequel to the 2001 comedy. 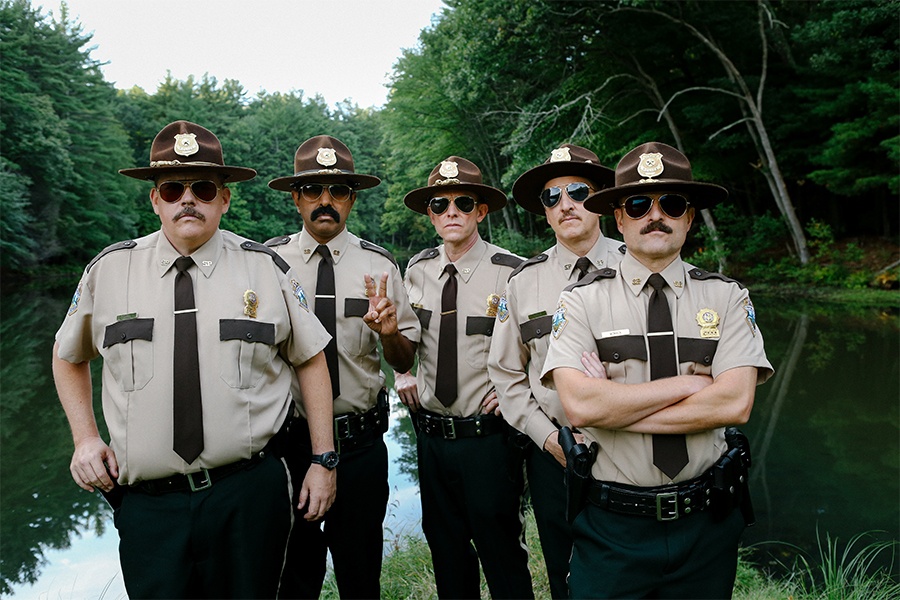 Grab your liter of cola and get ready for some shenanigans: Super Troopers 2 is here in all its mustachioed glory.

The sequel, which filmed here in Massachusetts, sees the troopers out of policing and into construction (thanks to a villainous Fred Savage). Until, that is, the governor (played, again, by Wonder Woman herself, Lynda Carter) approaches the boys with a little proposition: The French-Canadian town of St. Georges du Laurent is actually on American soil, and is in need of a temporary police force to help phase out a Canadian Royal Mounted unit. What ensues is an R-rated blend of bears and brawls—and, of course, plenty of killer cameos (welcome back, Jim Gaffigan).

With Super Troopers 2 fortuitously hitting theaters 4/20, we sat down with the troopers themselves—Jay Chandrasekhar, Kevin Heffernan, Steve Lemme, Paul Soter, and Erik Stolhanske—to discuss their eighth full-length feature, as they ponder the future of the stoner flick.

So, congratulations on the sequel, guys! How did it feel to revisit these roles 17 years later?

Paul Soter: We say three years [they all laugh]. We’re just gonna fudge the numbers and hope that nobody notices.

How did the Boston screening go?

Kevin Heffernan: It was fun because there were a lot of crew members there. We shot here [in Mass.] and this was the first chance for all of them to see it, so it was fun to show it to them. They all had a stake in it, as they’d been working hard on it.

PS: And it was funny—we shot the whole climax at the [JB Sawmill in Hopkinton], and so the sawmill owner and family employees showed up and it was funny to see this like, truly dirty-fingernail gang—in the best of ways—gussied up for a Hollywood movie premiere. It was delightful.

Where exactly did you film here?

PS: We really did go all over. Lexington, Concord, Marlborough…

KH: A lot of it was in Concord. There’s a gun club [Musketaquid Sportsmen’s Club] there tucked away in this lake that looks like Canada, so that’s where we were for about two weeks. We shot a bunch of highway stuff in Central Mass., like in the Quabbin Reservoir. We were there for a week. So it was kind of all around.

Steve Lemme: And then the big finale was at the JB Sawmill nestled out there in the woods, which provided us with one of the greatest sets we’ve ever had.

Was the first movie shot here, too?

Jay Chandrasekhar: No, that was near Poughkeepsie.

Oh, so not actually Vermont!

SL: You know, Vermont wouldn’t really have us the first time we shot the movie. In fact, I don’t think we were even allowed to say “Vermont Highway Patrol.”

Really, they didn’t want you there?

KH: No! Now the Royal Canadian Mounted Police, on the other hand—they were prepared to sue us [laughs].

I enjoyed that you guys went against the “super-nice Canadian” stereotype. Why was that?

JC: I think it’s just been done. If you spend some time there—I’ve shot a lot of television in Canada—and if you’re there after midnight, it’s when they all turn into hockey toughs.

SL: Don’t even get me started on the salmon fisherman [all groan].

What made the Broken Lizard team turn to film instead of TV?

JC: Monty Python did it! And that’s really what we wanted to be.

Besides Monty Python, who are your comedy idols?

SL: And the Zucker brothers. I mean, there was so much great comedy in the ’70s. SNL was awesome. There were great R-rated comedies. When we were little kids, all those sort of eye-opening movies we got to see were these raunchy, R-rated comedies.

Did you guys always want to be comedians, then?

SL: Not really [laughs]. I wanted to be Mick Jagger.

PS: Yeah, I wanted to be in a band and I wanted to make comedy. A lot of us either played instruments or tried to be musicians and so this [comedy/acting career] was like, “Wait a minute, we can be comedians and be in a band.”

JC: It isn’t really a realistic career choice. I mean, we pursued it, but it was always like, “Well, we’ll go as far as this goes.” And it’s still going! [laughs]

So you guys were musicians—does that mean you’re actually playing in the scenes you appear to be in the movie?

SL: I took it very seriously. I was like, “Okay look, this is as close as I will ever get to being a rock star, so I want to look as much like a rock star as possible.” We had listened to the newest Eagles of Death Metal [album] and picked a song that we thought worked for the opening scene, and I encouraged everybody to learn their part. And so we sat with the band and had them teach us [how to fake-play their parts]. For me, I wanted to fucking look like a cool bass player!

KH: Now are you insinuating that some people did not do that?

SL: …I will not say anything more…

JC: We all learned our parts. But when you try to fake-play guitar the way you’re supposed to and tell jokes, it all just went right out the window.

ES: Right. But we’d be in the hotel in Amherst and you’d walk in and Steve would be there with the drummer [Eagles of Death Metal’s Josh Homme], who was teaching him how to play drums. Like, he was actually learning how to play the drums.

How much of your films are scripted and how much are ad-libbed, generally?

How much weed do you think you guys smoke during each film?

As weed becomes legal, do you think stoner comedy is going to change at all?

KH: There’s definitely something less underground about it. Like, the first rated-R movie I ever stuck into was Cheech and Chong and that was like, “Whoooaa.” And I don’t think it has the same effect anymore. It’s in the culture now.

What’s next for you guys?

PS: Well, that’s another case where that had a different implication as a joke at the end of Beerfest than it would now. To me, it makes it a little tough to get my head around because the idea of a secret underground pot-smoking thing—it’s just not necessarily an underground activity anymore.

JC: Well, it still is in 30 states, right? It’s still under prohibition.

ES: We’ll do it in Alabama.

SL: Sure, sure. But just the public perception around it has changed.

KH: And states are dropping. I mean, Massachusetts—God, who would have thought?

Finally, what were some of your favorite moments from this film?

ES: I love when you see Farva seeing his French-Canadian counterpart. That’s such a good moment. That’s one of my favorites.

KH: Having a real bear on set was fun, too. It was kind of weird having another actor join us.

SL: I love the shooting [at the gun club], and watching the whole rock ‘n roll tour bus chase. And—well, I don’t want to spoil it.

JC: Oh, are you going to spoil it?

SL: Well, there’s this scene where these guys are in makeup that I really like.

PS: It’s nice to get dressed up.