This Local Company Gets Museum Technology Down to a Fine Art

Are there too many smartphones in museums? The founder of Cuseum doesn't think so. 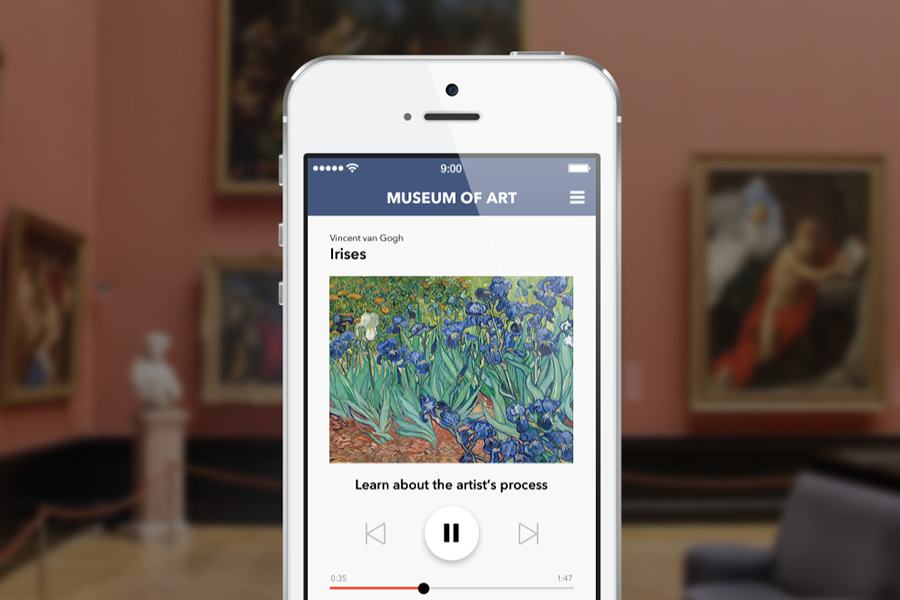 During a time when art museum attendance is declining in America and photos of exhibits are accessible by a tap on a screen, what does the future look like for art museums in Boston and beyond?

Boston-based startup Cuseum is one of the players engineering it.

Digital membership replaces physical membership cards with digital ones that reside in the “wallet” feature of smartphones. It also sends alerts and information directly to members’ phones. Mobile engagement is a feature offered in lieu of traditional audio headset guides. Cuseum can act as a digital tour guide to enhance the museum experience with videos, photos, audio, and more. Augmented reality, meanwhile, is meant to add a new dimension to the exhibit-viewing experience. By looking at the world through the lens of their smartphones, viewers can see things (like shapes, structures, and virtual art) that wouldn’t appear in the exhibit otherwise.

Ciecko’s creative vision for Cuseum was a reaction to his observation that the tools museums were using to engage with their patrons were obsolete and expensive. His wife Elizabeth Dobrska named the app, riffing off of its intention to “cue” users’ attention through mobile engagement.

“It’s safe to say that today digital is not an option—digital is an absolute necessity,” Ciecko says. “The benefit is to communicate with the broadest audience, and today, that’s through digital. Through our phones and devices, we communicate, we socialize, we see the world, and more than anything we learn.”

Locally, Cuseum has worked with museums like Institute of Contemporary Art, the Boston Athenaeum, Mass MoCA, and the Davis Museum at Wellesley College. And more recently, Ciecko played with AR in an experimental creation he made for the Isabella Stewart Gardner Museum. The project uses AR to solve the Gardner Museum’s notorious 28-year-old problem in an inventive way.

Called “Hacking the Heist,” it allows users to experience the Isabella Stewart Gardner Museum as if one of the world’s largest art heists never happened there. The user simply points their phone camera at the museum’s still-vacant frames, and sees images of the valuable works return to their rightful locations. Currently, the works he’s made visible include Rembrandt’s A Lady and Gentleman in Black and Christ in the Storm on the Sea of Galilee.

Cuseum has also developed an AR product for another client: the Perez Art Museum in Miami. Launched in December 2017, the exhibit Felice Grodin: Invasive Species is the first public use in the museum space of Apple’s ARKit technology (a software development kit for creating AR apps). Ciecko says the exhibit’s AR component facilitates visitors’ access to information and sparks their imaginations.

Some museums, however, are pushing back at the interference of smartphone culture in the art-viewing experience. The De Young Museum in San Francisco, for example, reserved specifically photo-free hours during one of their exhibitions. Yet a crop of new museums like the Museum of Ice Cream and traveling exhibits like the Rain Room have been dubbed “selfie factories” by Wired. Time will only tell how museums near and far will adapt to today’s rapid evolution of technology, with smartphones or without.

Until then, Ciecko will keep exploring the digital realm here in Boston, asking “How can AR be used to produce new culture? How can we create a completely new experience?”