Eight Historic Neon Signs Are Being Installed on the Greenway 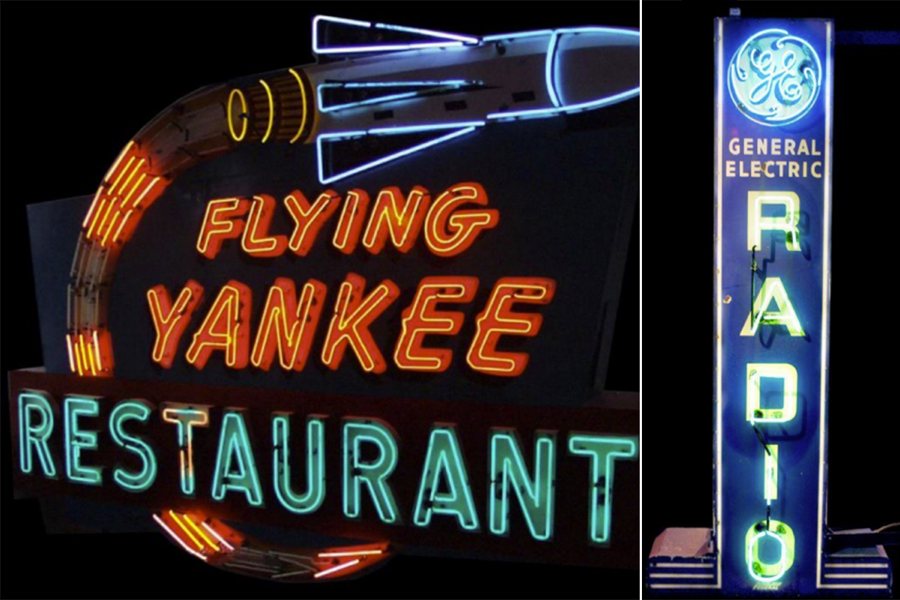 The Greenway is going neon.

As part of its rotating showcase of public artwork, the park will be featuring a group of eight vintage neon signs that once graced the entryways of local businesses, sourced from Malden-based collector Dave Waller.

The Greenway shared a photo on Monday of the installation process for the outdoor exhibit, which is called GLOW. In a photo, a crane can be seen lowering a light-up chicken from the now-defunct West Roxbury restaurant Fontaine’s. The sign dates back to 1950.

The rest will be placed between India and State Streets over the next week and will stay there for the summer. Spanning 1925-1970, featured signs include Boston businesses Bay State Auto Spring (1965), Bill’s Radio (1927), European Restaurant (1970), alongside signs sourced from Auburn, Natick, Saugus, and Wilbraham.

It’s one of several installations planned for the Greenway this summer. The other pieces are an interactive LED piece inspired by the history of the Big Dig from Chicago art duo Luftwerk, and a “kinetic sculpture” made by Somerville’s Anne Lilly.

The neon signs are intended to be create a warmly lit walk down memory lane and be an “illuminated monument” to parts of the city lost to time and the forces of gentrification, according to a press release. “In placing these signs together in a contemporary urban park in Boston, we’re inviting the public to reinterpret these signs and reconsider how neon, as well as other kinds of light, can define public space,” said Lucas Cowan, the Rose Kennedy Greenway’s public art curator, said in a statement.

There’s been a lot going on over at the Greenway lately. Boston Calling has just announced the schedule for the return of its Block Party series in Dewey Square, and we learned last week that the popular Trillium beer garden will be returning in late May, with extended hours. Also, the Greenway is celebrating a successful bid to create a Business Improvement District, for which businesses adjacent to the park have agreed to help pay for its upkeep, to the tune of $1.5 million a year.

“These installations will appeal to a diverse range of audiences” said Jesse Brackenbury, the Greenway Conservancy’s executive director. ”We encourage visitors to come for one of our 400 free events and stay into the evening for the light-based artworks and our beer gardens.”