The star of the company's production of Sleeping Beauty has been a professional ballerina since she was just 16 years old. 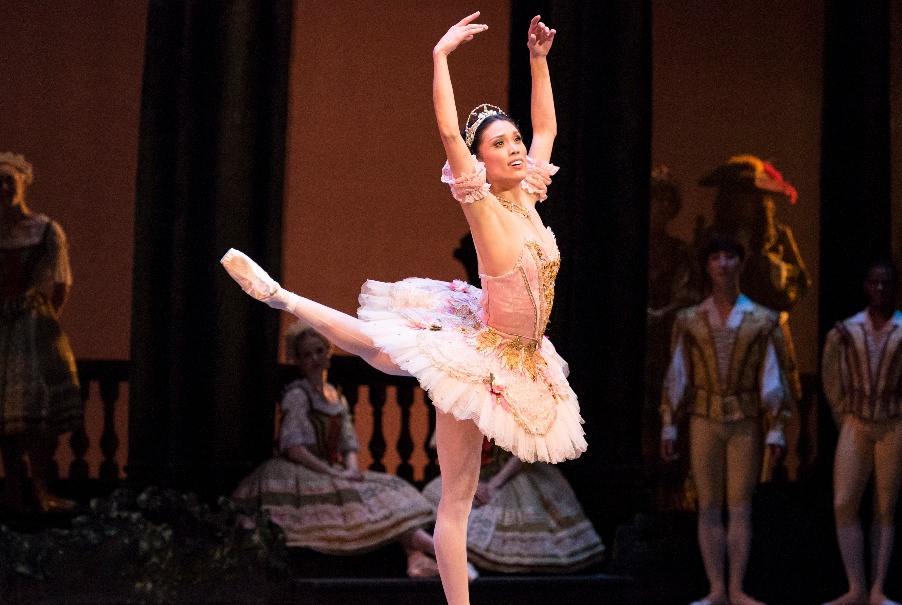 What’s it like to have one of the coolest jobs in Boston? We want to know. So we’re tracking down the city’s most interesting employees and asking them the questions that need answering. Have a suggestion? Send us a tip to editor@bostonmagazine.com.

You know the story of Sleeping Beauty: evil witch, finger prick, long nap, happily ever after. But if the Disney cartoon is your only experience with the fairytale, you’re missing out big time. Complete with stunning costumes, enchanting music, and pristine dancing, the Boston Ballet’s revival of Tchaikovsky’s classical work is on stage at the Boston Opera House until May 19. And Lia Cirio, a principal ballerina who has been with the company since 2003, stars as Aurora. We spoke to Cirio about her pre-performance rituals, diversity in dance, and what it was like to turn pro at age 16.

It’s a beautiful show. It’s one of those staple, classical ballets that I feel like everyone should definitely experience. Everyone knows the story, so it’s easy to come and watch. The role of Aurora is one of the hardest for a ballerina. The first act, I think if you ask any professional ballerina, they would say it’s the hardest role they’ve ever done. It’s a marathon, and it’s just you dancing pure classical ballet, and you have to make it look effortless, like everything else. You literally think you’re going to die during the act, but it’s beautiful. The sets and the costumes are amazing, and the orchestra is beautiful. It’s Tchaikovsky music, so what’s not to love about Sleeping Beauty?

I’m from Pennsylvania originally and I trained at a school in Carlisle, Pennsylvania, called Central Pennsylvania Youth Ballet. And when I was 16, I felt ready for a professional company, so I started looking around for companies that I felt fit me. One of my teachers was friends with Mikko [Nissinen], our director at Boston Ballet, and was like ‘He’s doing a really good job in Boston, and I think the repertoire would really fit your dancing. Why don’t you fly up and take a class?’ And I came here on Valentine’s Day, took class, and he offered me a second company contract on the spot. So at 16 I was hired, and I got offers other places, but because I felt Mikko saw something in me right away, I was just called to go to Boston.

Do a lot of people turn professional at 16 years old?

It’s very young, actually. There are some people who have done it, and during the early stages of ballet history, people would begin that young. But now some people go to college and then get hired. … My family had to move here with me because at the time, you couldn’t live without a guardian in Boston and work, so my family sacrificed and came for me to have this job.

I get up, drink some coffee, and we have class at 9:45 a.m., so I take the T to work. We have an hour and a half warm-up class, and then usually we have three hours of rehearsal time, an hour break for lunch, and then another three hours. So depending on what your schedule is, you may have six hours a day, or you may have four, it just depends on what you’re rehearsing. And then, if we’re in the theater, we go in a little bit later, around 11:45 a.m., and then we rehearse on stage and then we have a break for dinner and then we rehearse until about 11 at night or we have a show at 7:30.

Do you have any pre-performance rituals?

Depending on what role I’m doing, I get ready an hour and a half or an hour before, I do make-up, I warm up. I’ve been doing the same barre before a show since I started professionally, so that routine is good luck in a way. Having a routine and figuring out, ‘Oh I put my pointe shoes on at this time, at this moment,’ is really key for me. I also say a little prayer. And, it’s crazy, but I check my ribbons incessantly. It’s my one nervous thing, just to make sure they don’t come out or undo. I check them probably 40 times before I go on stage.

Definitely being on stage. It’s just another world. There are just moments that you never forget and breakthroughs that happen on stage that are just really special. And dance for me is an escape. It’s what I live and breathe, and I get to do what I love every day.

My body really hurts. You wake up every morning and you’re like, ‘Oh, I can’t walk yet.’ You get out of bed, and you’re like, ‘Well, that ankle hurts, and that hip hurts,’ but it’s the sacrifice and you figure out how to get through it. You take baths, you go to PT, you do cross-training.

How have you dealt with injuries?

I’ve been super lucky because I’ve never, knock on wood, had a major, major injury. If I feel that something is bothering me, I will definitely go to our physical therapist. We have an amazing team, and they help me through that. And I believe in cross-training. I ride the bike and do intervals, so I keep my stamina up and keep my legs strong. I am a big believer in pilates … and I just really believe that that core strength has strengthened me as well as prevented so many injuries.

Any funny moments you can share from your career?

When Boston Ballet was on tour in Spain, I was dancing a lead in Balanchine’s The Four Temperaments, and I wiped out three times in a row. Come to find out there was candle wax on the floor. Falling in ballet can be pretty funny as long as no one gets hurt.

What are your relationships like with the other dancers?

At Boston Ballet, we pride ourselves in the fact that we’re very family-oriented. People come in and they’re like, ‘Wow everyone is so nice and supportive.’ Ballet can be such a cutthroat kind of atmosphere, and of course there’s competition between colleagues, but I’ve grown up with a lot of the people here. I’ve had relationships and gone through breakups and things like that with all of these people. We’ve just supported each other through it all. Dance is so hard physically and mentally, and we just try to push each other and support each other. I have my best friends here, and they’re family.

And was your brother at one point part of Boston Ballet?

Yeah! He was a principal here, and now he’s a principal at American Ballet Theater. I really miss having him around. Because he’s a guy, we never had a competition between each other, so we just lifted each other up and supported and gave each other corrections.

If you could change something about ballet, what would it be?

Ballet sometimes gets stuck in the past. I am not a pure white ballet dancer. I’m half Filipino, and I have broad shoulders. I might not look like a Juliet or a Giselle ghost, but I can portray that. And I think that sometimes people, older generations, come to see ballets and they look at me, and they say, ‘Oh, she’s not that at all.’ They just take one glance, and I think that if we could wave a magic wand and take that bias away, that would be pretty amazing.