What you need to know about the locals taking the stage. 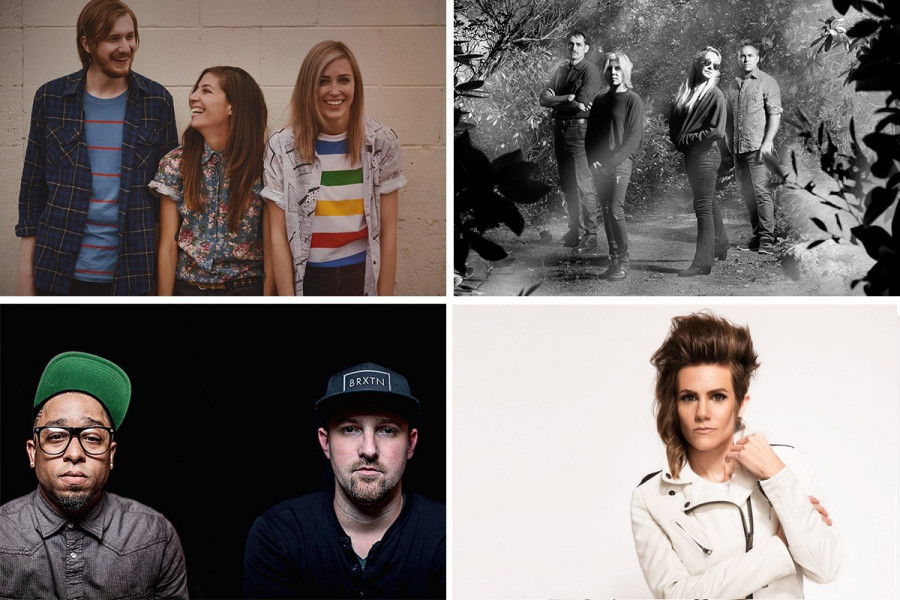 We’ve said it before, and we’ll say it again: If you only show up for the bands you know, you’re doing Boston Calling wrong. For the full experience, you have to commit to showing up early and discovering something new this weekend. There’s no better place to start than with Weakened Friends and STL GLD, two must-know hometown heroes representing New England on Friday.

They’re not the only ones from the region you can, and should support. Boston music scene mainstays Belly, who hail from Rhode Island, will also be taking the the stage, as will the trio behind Pod Save America (two of whom are locals). And, just a reminder, before they were famous, St. Vincent and Cameron Esposito once called Boston home.

So for those of you who want to show some love for local talent, here’s a helpful guide to get you started:

A mash-up of Portland’s The Box Tiger and Boston’s The Field Effect, Weakened Friends has caught the eye of some big names in the industry. The trio recently teamed up with Boston music royal J Mascis of Dinosaur Jr. for the noisy breakup anthem “Hate Mail,” and has so far gigged with the likes of  CHVRCHES and Silversun Pickups, and last year got a nod from the Boston Music Awards for Best Unsigned Artist. By the way, if you play the song “Crshd” from their Crushed EP, listen for gang vocals from Berklee students.

Where they’re from: Portland, ME

Roxbury emcee Moe Pope and Cambridge producer The Arcitype make up STL GLD (it’s pronounced “still gold”), a rap duo whose songs are often political and address topics including inequality in Boston and police brutality. Their fierce sophomore effort Torch Song won Album of the Year at the 2017 Boston Music Awards, and last year, they teamed up with local artists Tigerman WOAH, Dutch ReBelle, and Julie Rhodes to record “Feels Like Home,” a tribute to Boston that also took home the trophy for Music Video of the Year.

Where they’re from: Boston

Once a massively popular early ’90s alt-rock outfit with hits like Feed the Tree, which topped the alt charts in 1992, Belly called it quits in 1996. But now they’ve reunited and are very much back in action, with a fresh new album out that, as a recent New York Times profile noted, is their first “since Season 6 of Seinfeld.” Even if they were a little ahead of your time, now’s your chance to get acquainted with some Boston rock history.

Song to know: “Feed the Tree”

Where they’re from: Rhode Island

The Dorchester rapper will take the stage at Boston Calling once again this year, filling in for Stormzy, who is out with an apparent illness. Stizz is loud and proud about his roots—he even released a mixtape called Suffolk County. One of his more popular tracks, “Shoutout,” caught Drake’s attention, who played it at his 28th birthday in 2014. A Dorchester native, Stizz began getting into trouble following the death of a close friend when he was 14, and his mother gave him an ultimatum: military school or high school in the suburbs. Stizz chose the latter, and ended up attending Reading High. Look for scenes of Boston in his videos.

Song to know: “No Bells”

Where to find him at Boston Calling: Red Stage at 5:55 p.m. on Sunday

Maybe you didn’t know that one of the most popular podcasts in the country has deep roots in Massachusetts. Two thirds of the progressive politics gabfest Pod Save America hail from the Commonwealth: Jon Favreau, the former Obama speechwriter, and Tommy Vietor, a former spokesman for Obama and the National Security Council.

Where they’re from: Winchester (Favreau) and Dedham (Vietor)

Yep, we’re including St. Vincent. She’s one of the biggest biggest stars to come out of Berklee, and the school takes deep pride that legacy. Technically speaking she’s from Tulsa, Oklahoma, but Boston is claiming her as its own. This will be her second go at Boston Calling, after a performance on sort-of home turf in 2015.

Where she’s from: Berklee by way of Tulsa

OK, same deal for Cameron Esposito. Again, technically speaking she’s from Illinois. But she also attended Boston College from 2000-2004, then spent two years living in Somerville, and she says it’s in Boston that she first found her voice in comedy and a truly LGBT-supportive community. She also, as she told us a couple years ago, loves Anna’s Taqueria. So a hometown hero she is.

Where she’s from: Western Springs, Illinois