How to Fight Sexual Harassment at Boston Calling

"Don’t just walk away and say, ‘That’s not our problem.'" 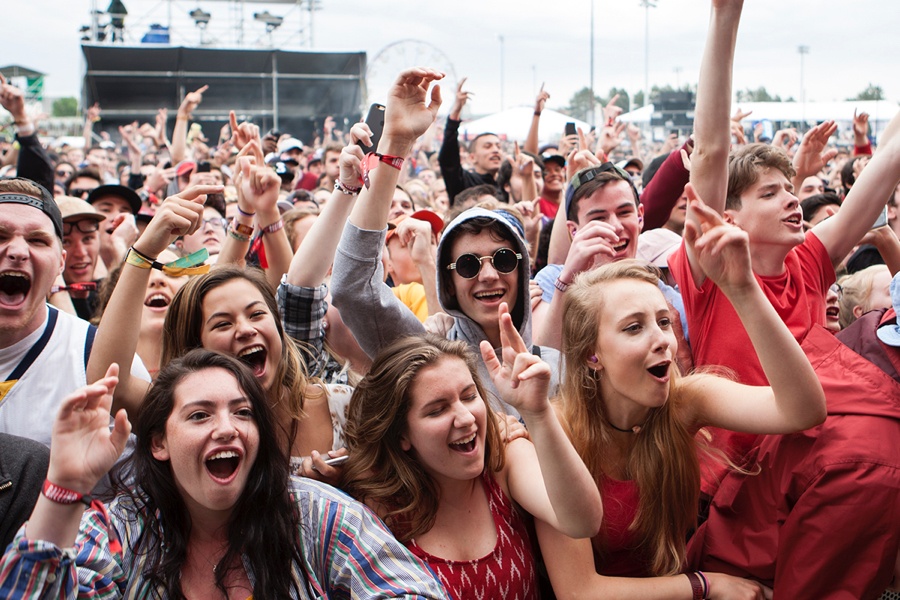 Boston Calling is here, and that means tens of thousands of fans are getting ready to scream the lyrics to Killers songs, nosh on Area Four garlic knots, and groove to Khalid.

But for too many music fans, festival season also means rampant incidents of sexual harassment and, in some cases, assault.

New light has been shed on the issue this year. A recent survey of 500 concertgoers in Chicago found that more than 90 percent of them had experienced harassment in some form in music venues and at festivals, including groping, verbal harassment, having their picture taken against their will, and other transgressions. Last month, a writer for Teen Vogue reported that she interviewed 54 women at Coachella in Southern California, and found that every single one of them had been harassed.

It’s not clear whether there have been reports of sexual assault at Boston Calling, or how many. Police tell me they are prevented by law from sharing that data, and the vast majority of such incidents go unreported anyway. But there’s no reason to believe Boston Calling might be any different.

“A lot of folks don’t realize that this is as big of an epidemic as it is,” says Maggie Arthur, a leader of the Chicago campaign OurMusicMyBody, which ran that jaw-dropping survey this year.

So what can we do in Boston about this? I talked to several groups specializing in sexual assault, and they have some thoughts.

For one, a clear sexual assault policy is a must. Boston Calling now has a “zero tolerance” sexual harassment policy posted on its website, which says any incidents should be reported to event staff (emphasis theirs):

Boston Calling has a zero tolerance policy for harassment of any kind.  It is our philosophy that our guests should be able to enjoy our event in a safe and non-threatening environment.

Boston Calling has a policy requiring that action be taken should anyone appear to be in an unsafe situation and to investigate and resolve all reports of harassment that occur at our event.  Employees, vendors, artists and guests are encouraged to report any interaction that makes them uncomfortable in any way.

Guests should report any allegations of harassment to the nearest event staff.

Boston Calling employees have also been trained specifically on how to deal with harassment and assault, according to a festival spokesman, and they are required to intervene if they see someone in distress.

That’s a good step. Lax rules can enable predators, Arthur says, and according to her group’s survey, strong sexual misconduct policies make concertgoers feel safer. The campaign has also been encouraging festivals to sign its anti-sexual harassment pledge (Arthur says it hasn’t contacted Boston Calling). “Signing a pledge or putting something on your website isn’t the end all be all, but it does send the message that this is something your festival is paying attention to and hopes to do something about,” she says.

Beyond that, music event organizers can also increase the visibility of resources for potential victims. Last week, the Rape Abuse and Incest National Network, or RAINN, announced it will provide “professionally trained counselors and a dedicated security team” to the Pitchfork music festival as part of a partnership with the event. In Boston, a nonprofit called Calling all Crows, founded by Chad Stokes of the band Dispatch, is launching a new initiative focused on sexual harassment prevention called Here for the Music. The group has not worked with Boston Calling, but has been leading training sessions for event staff at music venues along with the Boston Area Rape Crisis Center, and will have a presence at the Bonnaroo festival’s “Planet Roo.”

To further send the message about where festivals stand on the issue, advocates have also cheered efforts to exclude artists accused of sexual misconduct from performing, like R Kelly, who’s been taken off the lineup of a festival in Chicago after allegations from several women of sexual assault. As WBUR noted this week, the Boston Calling lineup includes the group Brockhampton, a member of which was accused of abuse earlier this month, which he denies.

Ultimately, anti-sexual violence advocates say, a lot of responsibility falls on others in the Boston Calling crowd. Experts point to something called the “Four D’s,” which describe ways for bystanders to intervene safely if they witness harassment or assault:

Direct: Directly intervene to stop harassment in progress.
Distract: Distract either the abuser or victim until it stops.
Delegate: Get help from others, including event security.
Delay: Check in with someone after an incident to make sure they’re OK.

“I’ve been at a lot of festivals, and if you just look around, you can see safe and unsafe behavior in every direction, behavior that could be really hurting someone,” says Kim Warnick, program director for Calling all Crows. “Don’t just walk away and say, ‘That’s not our problem.'”

Which is not to say that people can’t have fun, or be flirtatious, at music festivals, Warnick says. Of course they can.

“I think people should just look out for each other,” she says. “So that doesn’t mean you can’t ask to dance with someone, or ask for someone’s number. But remember to ask, and if someone says no, take that with grace and walk away.”

This story has been corrected to reflect that the nonprofit Calling all Crows will have a presence at the Bonnaroo festival, not Firefly.