Including the Boston Art & Music Soul Festival, a Teen Takeover at the Isabella Stewart Gardner Museum, and more. 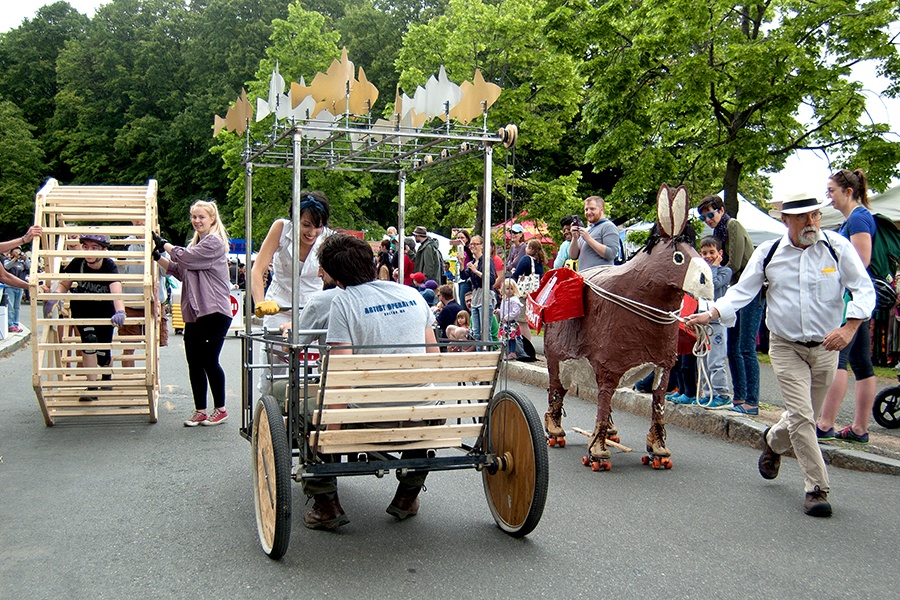 Crossing the Line to Freedom: A Musical Narrative

Douglass. Tubman. King. Robeson. In the Boston Public Library’s courtyard, listen to the stories of these famous civil rights activists told in a blend of opera, narrative, art song, and spirituals. Among the picturesque arches and the bubbling fountain, hear the history of these “legendary liberators” above the melodies of famous composers such as Nkeiru Okoye and Dorothy Rudd Moore.

Acrobatics, accordions, and acting—oh my! Catch all of that and more at the Cambridge River Arts Festival, where the work of over one hundred local artists will be on display surrounded by live jazz, indie, rock, R&B, and world music on seven different stages near the East Cambridge waterfront. Jam along with Little Groove’s interactive children’s songs, sway to Grammy-nominated singer-songwriter Alastair Moock’s Americana, or cheer on your favorite sculpture in the People’s Sculpture Races, which is part race, part performance art, part wacky display of creativity.

Visit one of Brookline’s longest-running festivals, which presents locally and nationally recognized artistic talents. 85 artist booths featuring everything from printmaking to glass-blowing will be on display, along with food trucks, a beer and wine garden, and a live DJ.

Channel your inner Brit on Wednesday nights this June. Whether you’re a seasoned expert of the game dubbed “chess on grass” or you’ve never even held a mallet, join Friends of Christopher Columbus Park member Jack McCarthy for a jolly game of croquet.

Missed out on Boston Calling this year? Don’t worry—you still have a chance to get your dance party on at the music festival’s annual block party series this summer. Each Thursday night features a new, local artist to jam to—from Rob Pagnano to Absolute Gentleman—along with a summertime selection of beer and wine. 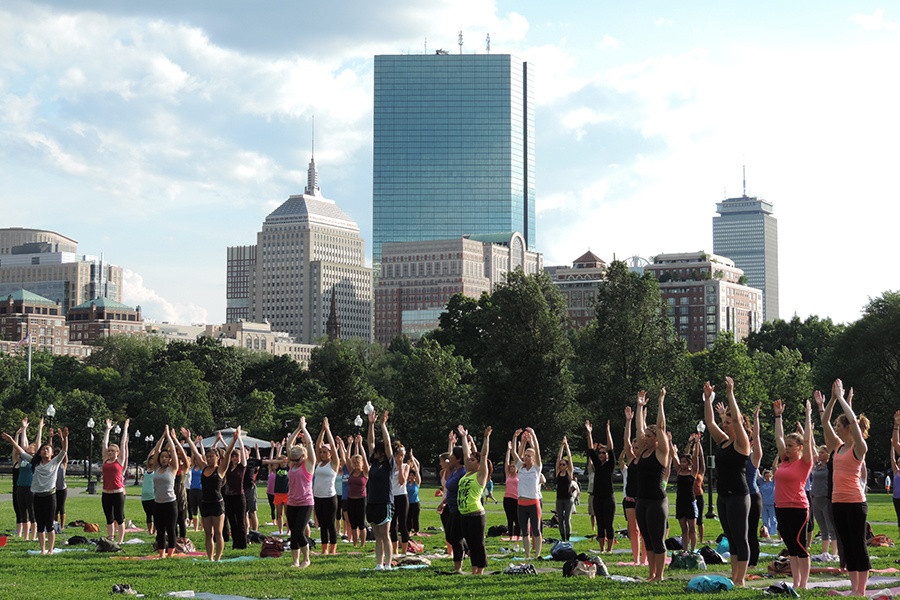 On Thursday evenings this summer, roll out your mat on the grass of the Boston Common for a yoga session sponsored by Boston Health Commission’s Summer Fitness Series. These yoga sessions, tailored for every skill level and led by seasoned yogis, will take you from downward dog to post-work relaxation amid the beautiful scenery of the park in the evening. #BeTheFrogi! 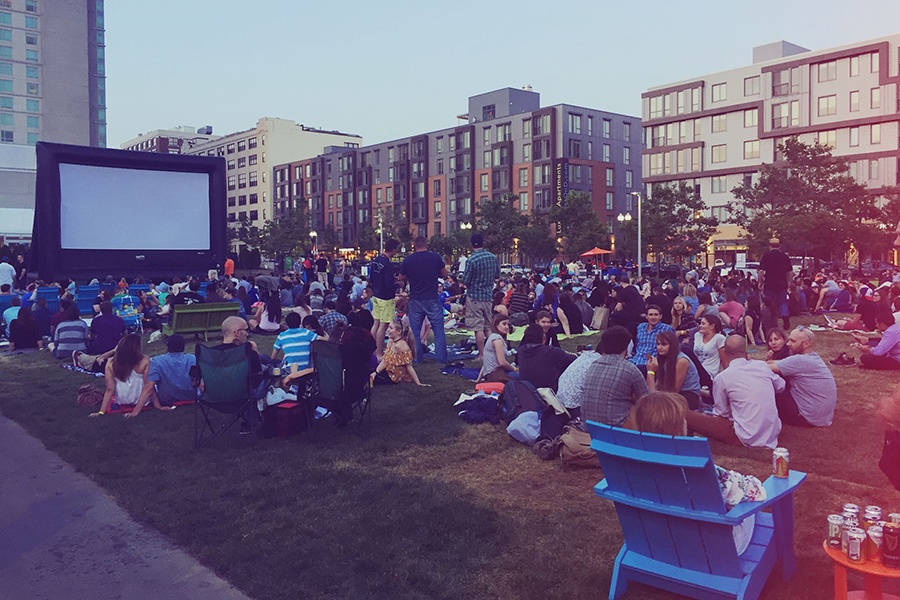 Courtesy of The Lawn On D, Massachusetts Convention Center Authority

Movies at the Lawn: Jurassic Park

Get ready for the latest installation in the Jurassic Park franchise, Jurassic World: Fallen Kingdom, by starting from the very beginning. After dark, watch the original ’93 Jurassic Park, complete with one of the internet’s most meme’d Jeff Goldblum performances.

Get ready to cheer for your favorite colorful dragon boat as dozens of racing teams kick off from the banks of the Charles in a fiery 500-meter race down the river. Later on, try your hand at Chinese calligraphy, or Japanese Origami. Follow along during the Taichi demonstration, or channel your inner martial artist with the Taekwon-do performance. It’s all accompanied by traditional Asian food, performances, and activities

June 9, 7 a.m.-5 p.m., Along the Charles River near Harvard, bostondragonboat.org.

Embrace the #WickedProud Boston Pride community at the annual Pride Festival, where this year’s theme, Rainbow Resistance, is a call to resist official policies that harm the LGBTQ community, and in particular those policies that harm trans people and communities of color. Another big talking point? The ballot question to repeal trans rights legislation in Mass. The Boston Pride Parade will funnel into the festival just as headlining stars Martha Wash and Big Freedia begin their performances. 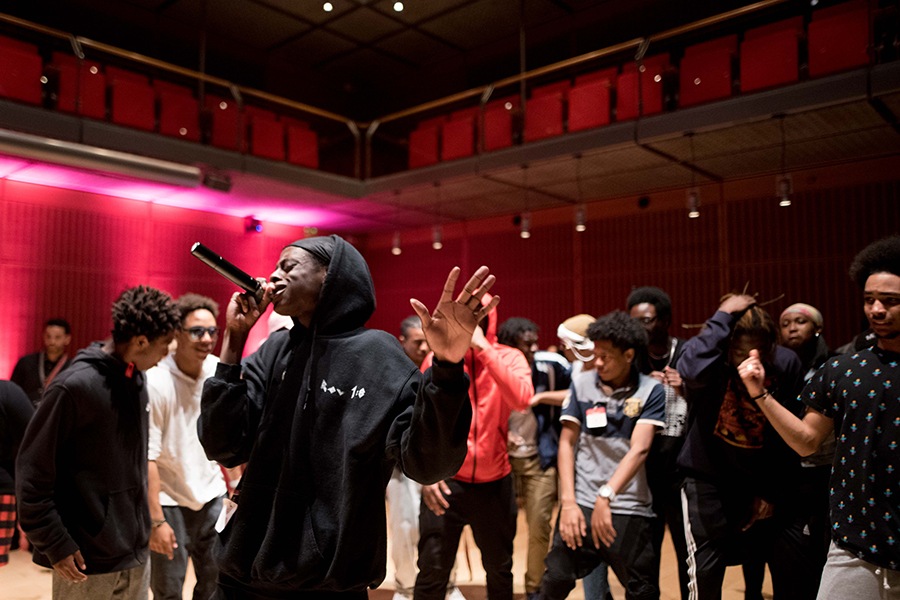 Teen Takeover: Glow From Within

This program gives teens the chance to shine with live music, dance, and slam poetry performances. “We really want teens to focus on what makes themselves feel good, what makes them who they are, and spread those good positive vibes leading into the summer,” says Eleanor Dennehy, a senior at Boston Latin School and one of the student organizers of the event. Of course, it wouldn’t be a teen takeover without trendy foods: Enjoy bubble tea and waffles while you learn how to glow from within. Admission is free if you show a flyer.

Even if your high school basketball team never made it all the way to regionals, you still have a chance to hold a championship trophy. At the Lawn on D, see championship trophies from Boston sports teams like the Patriots up close, and participate in fun activities such as printmaking workshops, live bird demos, obstacle courses, and giant Connect Four games.

Alfred Hitchcock’s Academy Award-winning 1954 thriller Rear Window is back on the big screen. The film follows wheelchair-bound Jeff, who passes his time by spying on his neighbors, and grows convinced that his neighbor Thorwald has murdered his wife. Considered to be one of Hitchcock’s greatest movies, it was added to the Library of Congress’ National Film Registry in 1997. Re-watch the classic film on the Greenway this month.

Tea & Tranquility and Under a Strawberry Moon

Have you ever walked the labyrinth at Armenian Heritage Park? Just steps from Faneuil Hall Marketplace, the elaborate inlaid rock and grass maze commemorates life’s winding journey. Take the time to walk the labyrinth while enjoying tea and desserts with other interested guests on a weekday night. 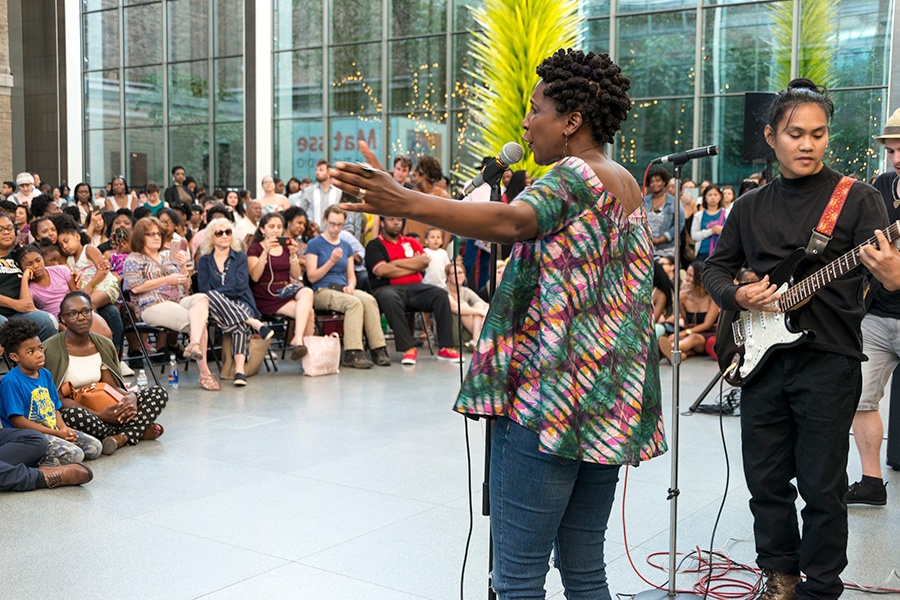 Held to commemorate the end of slavery in the United States in 1865, Juneteenth is a day of celebration but also of solemnity. In collaboration with Boston’s Transformative Culture Project, the MFA will host powerful discussions, art, and music featuring local artists on this important historical day. According to Linda Apple, the museum’s Director of Volunteer and Community Engagement, visitors can take a guided tour of the museum to learn about the African American artists on display, or join in on a outdoor screening of the hit movie, Black Panther.

Pass the time on the longest day of the year exploring four Harvard museums, weaving flower crowns, enjoying live performances, and learning about the “astronomical significance of the solstice.”

Happy hour might be illegal in Massachusetts, but nobody ever said anything about Yappy Hour. Bring your furry friend to the Boston Seaport on Thursday night for a block party exclusively for pups, featuring live music, dog and human snacks from Seaport eateries, and giveaways! Now that’s something to bark about.

Strap on your helmet and get ready to pedal through history on this exciting trip down the city of Boston’s newly complete bike trail, connecting several famous historic sites. According to Boston Transportation Department’s Active Transportation Director and bike tour guide Stefanie Seskin, the bike route will start off at the carousel on the Rose Kennedy Greenway, duck under the Washington Street Bridge, and loop back around by TD Garden. “Part of the ride will also talk about some of the engineering that went into what we did on the street, as well as touching on some of the reasons for the project and some of the historic sites as we go by,” says Seskin. And you don’t have to be a history buff to enjoy the tour. “I’m not a historic expert, [but] I will be able to have fun talking points,” she says. Bring your own bike, or register in advance to rent a complimentary Blue Bike from the bike share program.

Commemorate Boston’s own “Queen of Disco,” Donna Summer, with a roller disco party. Roller skates will be available on a first-come, first-serve basis, so get there early to boogie to the beat on the City Hall skating rink. 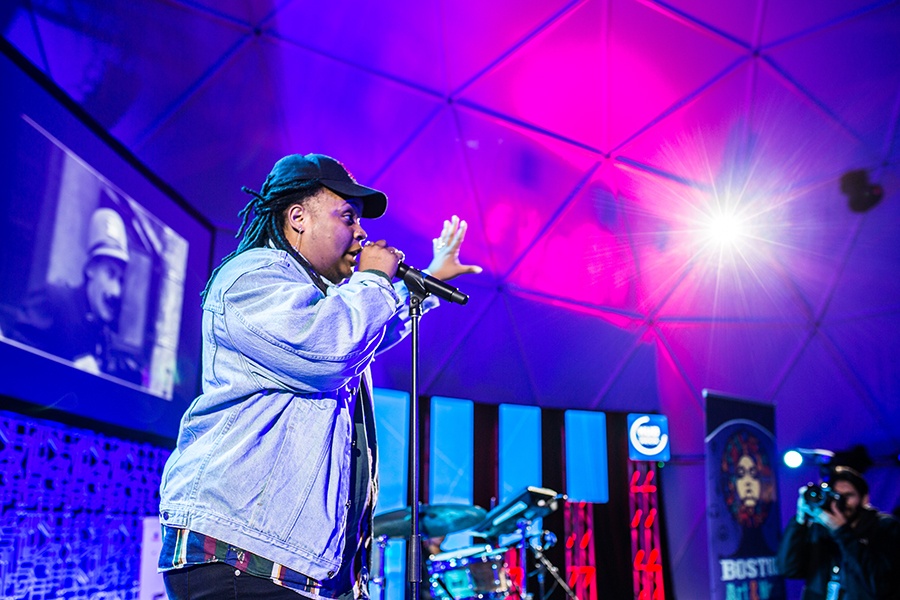 Through live music, food, and creative entertainment, celebrate Afro-centric contributions to the global cultural community at the first iteration of this Boston nonprofit’s festival. Music from local and national artists, headlined by neo-soul duo Kindred the Family Soul, will kick off the festivities, followed by the Rep Yo’City Arts Battle, a live onstage competition between two professional graffiti artists.

Beginning in late June, the Highland Street Foundation partners with a variety of cultural venues to provide free Friday experiences across Massachusetts. On the first Friday of the summer, explore neuroscientist Santiago Ramón y Cajal’s early 20th century sketches of the brain, or the evolution of ocean engineering in the Hart Nautical Gallery at the MIT Museum. If science isn’t your thing, visit the Lyric Stage Company of Boston for a theater tour and a performance of Lerner & Loewe’s “CAMELOT” at 3 p.m. “It doesn’t matter where you’re from, or what you do, or how many people [show up], everybody’s welcome,” says Blake Jordan, the foundation’s executive director. “We hope that now is the time that people will really utilize all these great treasures that our state has.” 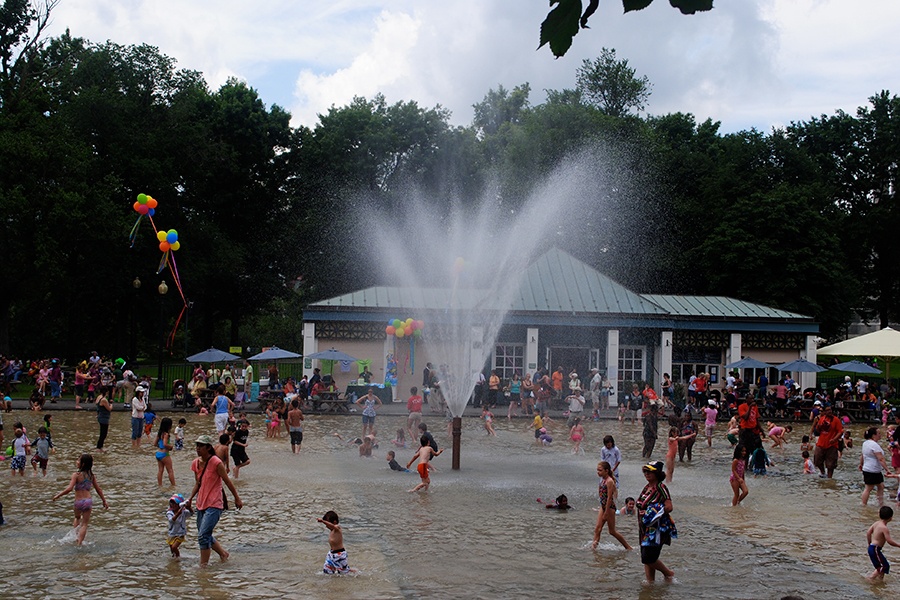 Photo courtesy of the Skating Club of Boston

3…2….1….Splash! Wait with eager kids at the fringes of the frog pond as Boston Parks Commissioner Chris Cook and Skating Club of Boston executive director Doug Zeghibe count down the opening of the spray pool and its 30-foot high jet. Giveaways, games, science experiments, and face painting will accompany the annual summer opening.

Nothing says Independence Day Weekend like a day in the park with Uncle Sam…on stilts. At the Independence Day Celebration, enjoy classic kid-friendly activities like corn hole, face-painting, and giant Jenga, plus appearances from Mickey and Minnie Mouse, Benjamin the Juggler, and Peter the Magician. Close out the evening with live music and a colorful fireworks display over the water to kick off Boston’s annual Harborfest celebration.