Back in Circulation: How Boston’s Libraries Are Finding New Life

In a city booming with tech startups, our decidedly analog libraries are finding new life. And books have almost nothing to do with it. 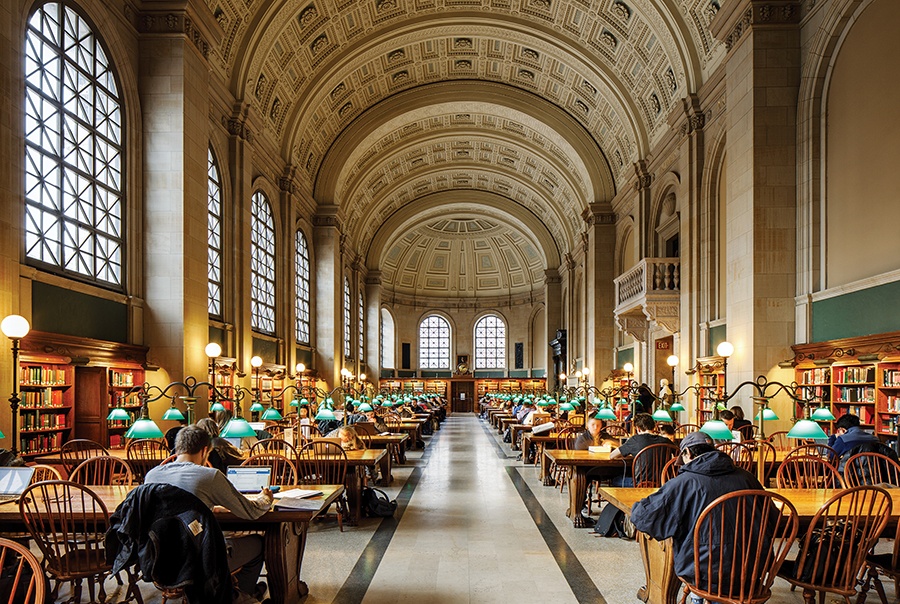 With its emerald-green reading lamps and dramatic arched ceiling and windows, the Boston Public Library’s grand Bates Hall has been welcoming Bostonians in need of a place to work or study for more than a century. / Photograph by Bob O’Connor

In a town with as much celebrated history as Boston, March 20, 1854, is a date that lurks below the radar. On that day, in a former schoolhouse on Mason Street near the Common, officials flung open the doors of the country’s first free city library, stocked with 16,000 volumes. The narrow, three-story brick building quickly proved too modest for the library’s ambitions, and by 1895 the bookish heart of Boston moved to a palatial building in Copley Square, with the mandate that it would remain “perfectly free to all.” Since then, Boston’s library scene has grown to encompass some 25 public branches, not to mention dozens of university libraries and private collections. Everywhere you look, they loom large in the fabric of our neighborhoods. And together they have quietly served as a better symbol of the city’s fiercely innovative, intellectual, and progressive spirit than any well-flogged recollection of tossing tea in the harbor or going for a late-night pony ride ever did.

Despite their reputation for shushing, libraries in Boston and beyond are alive with activity—and as relevant to the way we live now as they were more than a century ago. When I walk into the BPL’s Bates Hall, the main library’s grand reading room, on a sunny afternoon this spring, every last wooden table is occupied. Flanked by backpacks and yoga mats, clad in suits and sweatshirts and studded leather, twenty- and thirtysomethings text on their iPhones, type on their laptops, and, yes, pore over thick tomes underneath the classic emerald-green lamps. Among the expected students and scholars, though, sits a rapidly expanding community of freelancers—who may make up about 40 percent of the American workforce by 2020—eschewing trendy coworking spots with coffee and ergonomic chairs in favor of the original shared workspace.

Don’t call it a comeback, but libraries are once again having a moment. At a time when community and face-to-face connections feel harder to come by than ever, they are among our most dynamic shared spaces, where you can find story times and sing-alongs for tots, coding classes for teens, conversation groups for ESL learners, film screenings for seniors, and hundreds of other free happenings for everyone in between. And they’re lending far more than just books: Outmoded card catalogs at the East Boston, Grove Hall, and Mattapan branches of the BPL have been transformed into seed libraries stocking beans and greens and morning glories, while Library of Things collections in Arlington, Brookline, and beyond let patrons check out everything from cake pans to record players to telescopes.

Librarians are also reexamining their roles, aiming to become incubators of culture and not merely custodians of it. They’re inviting artists into the library for residencies and performances—and hosting other events that tackle pressing issues of the moment. “We’ve noticed a strong desire for more interactive programming around civic dialogue,” says Michael Colford, the BPL’s director of library services. In April, for instance, the National Day of Conversation offered visitors the chance to video-chat with Kansas City Library participants of differing backgrounds and political perspectives. Across the Charles, meanwhile, Cambridge Public Library director Maria McCauley launched Our Path Forward, a series that’s included events such as a youth panel on gun violence and a workshop on detecting fake news. “That’s just an extension of the information literacy work we’ve done for a long time,” McCauley says.

And in today’s Boston, libraries are hardly confined by brick and mortar: Book bikes bring services to the streets, Little Free Library book exchanges have popped up around town, and digitization projects are making rare materials more accessible than ever. But while the shapes it takes may evolve, the idea that made public libraries revolutionary in the 19th century—a public space that elevates us all—continues to thrive. Here are snapshots of six extraordinary libraries, all worth checking out. 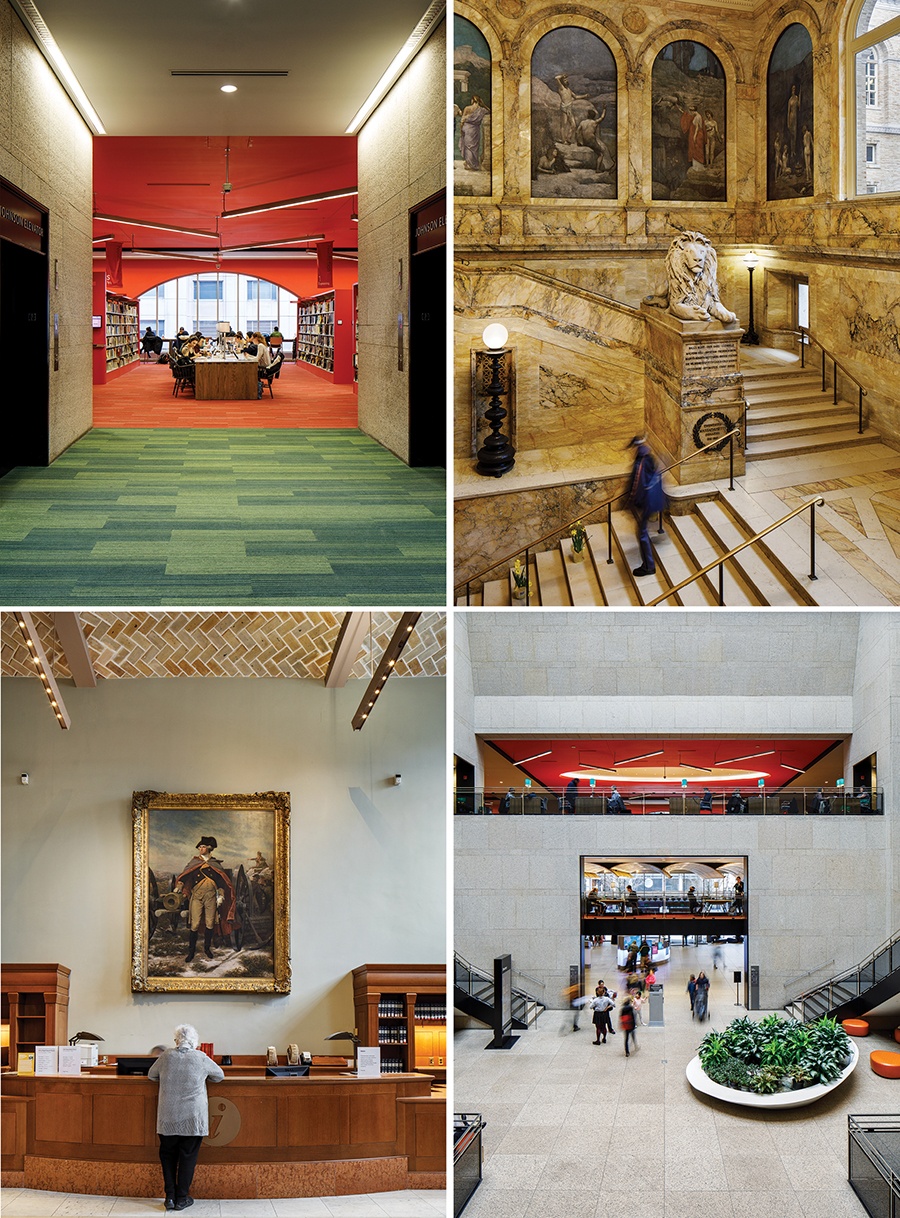 In the McKim building of the Boston Public Library, Louis Saint-Gaudens’s marble lions—memorials to two Massachusetts Civil War regiments—guard the grand staircase, while George Washington watches over the Fine Arts Department. The more-modern Johnson building, meanwhile, is just as stunning as its stately neighbor, thanks to a 2016 renovation that injected vibrant color and natural light. / Photographs by Bob O’Connor 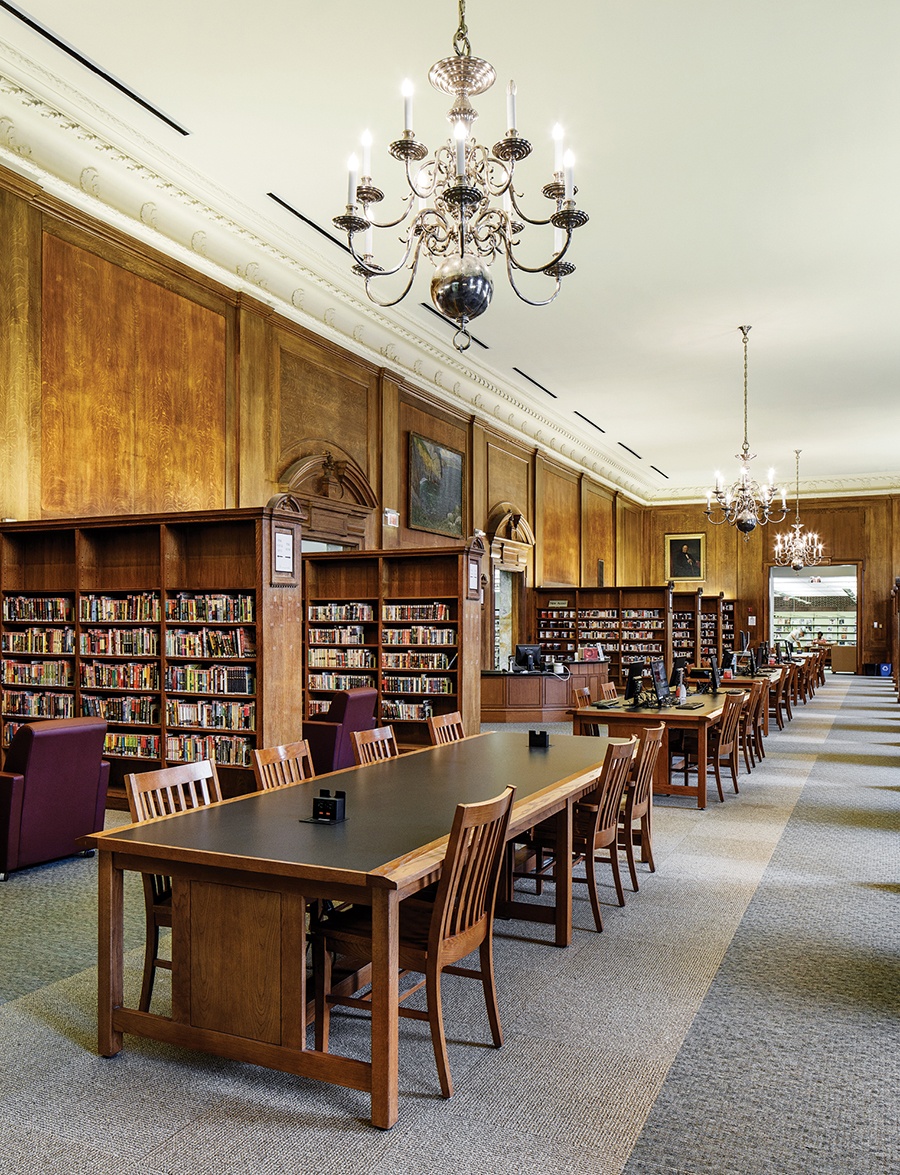 Don’t let the oak paneling and silver chandeliers fool you—the Public Library of Brookline is far from old-fashioned; in fact, it’s the first local library to have welcomed a visual artist in residence, who installed 17 pieces inspired by patrons’ library memories throughout the Brookline Village location. / Photograph by Bob O’Connor 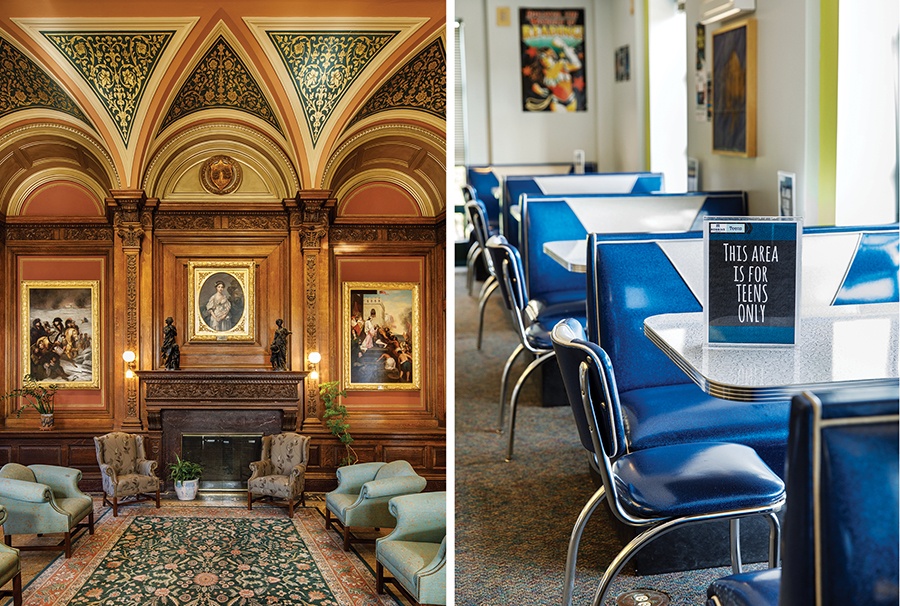 An early incarnation of Arlington’s Robbins Library is said to have hosted the country’s first children’s library (originally stocked, legend has it, with books lugged via wheelbarrow); today teens have a room of their own, too. / Photographs by Bob O’Connor 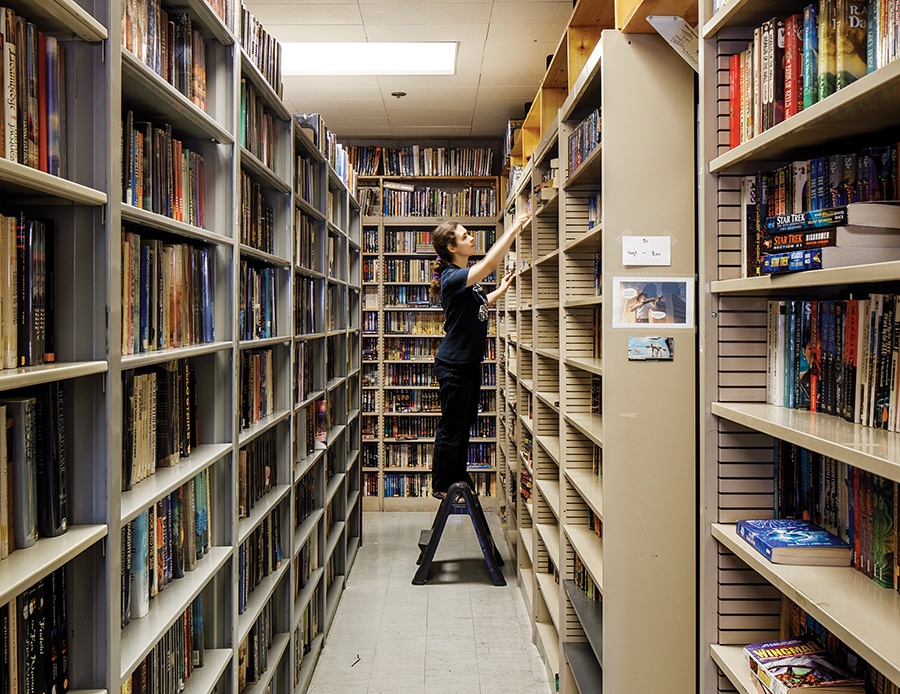 Many campus libraries cater only to students and faculty, but everyone can geek out at the MIT Science Fiction Society Library—the largest public open-shelf sci-fi collection in the world. / Photograph by Bob O’Connor 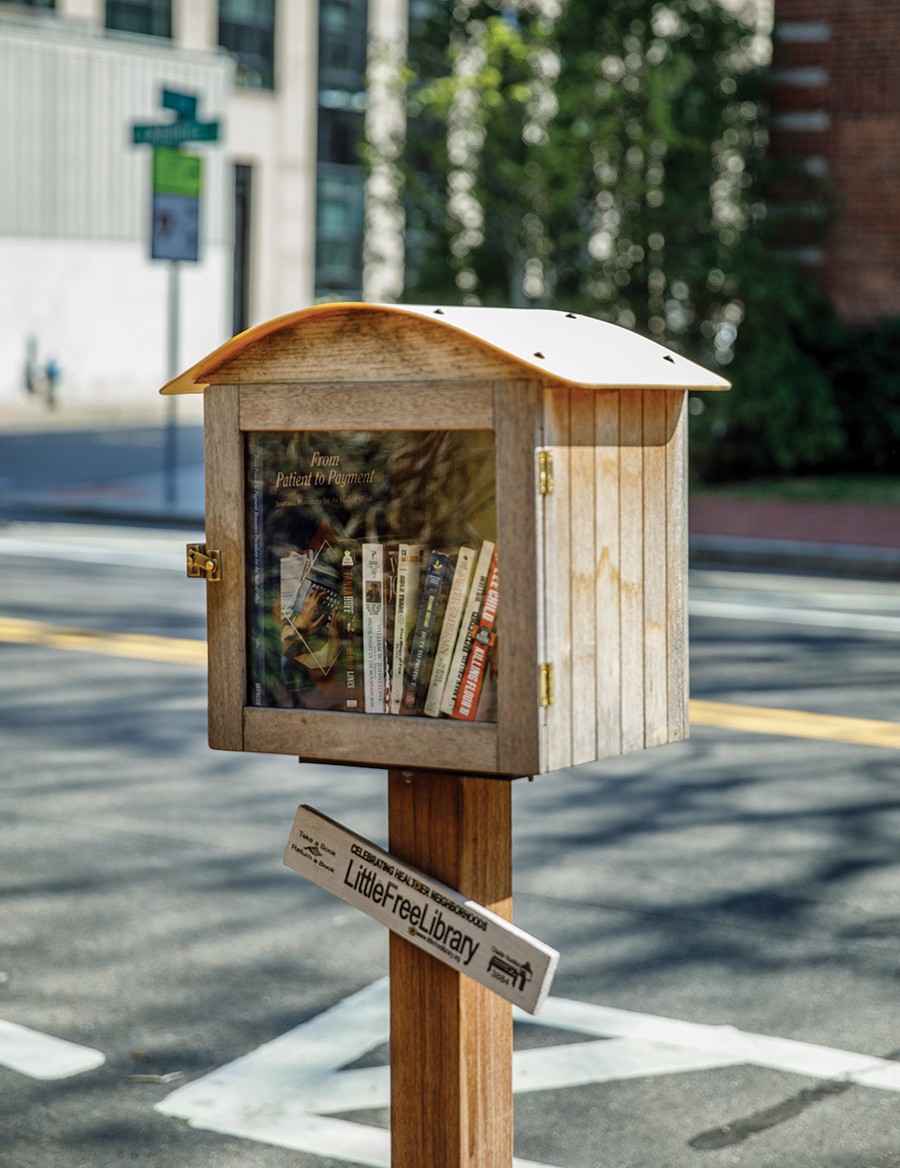 In less than a decade, the Little Free Library nonprofit has brought 60,000 book exchanges (like this one in Cambridge) to neighborhoods around the world. / Photograph by Bob O’Connor 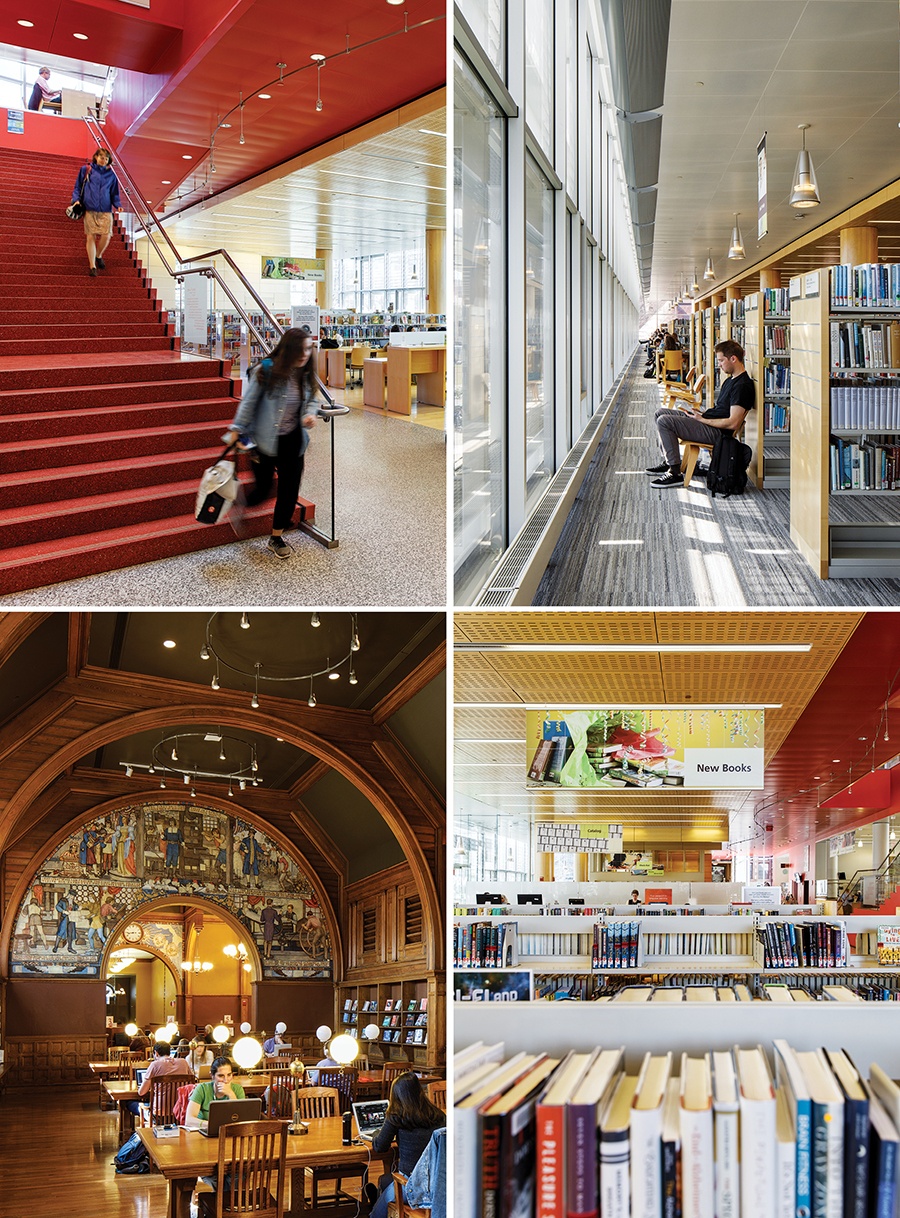 A mural depicting the development of the printing press adorns the reading room in the Cambridge Public Library’s original 1889 building. A 2009 renovation added a glass-walled wing—and earned the main library the Harleston Parker Medal, awarded to the “single most beautiful building” built in Greater Boston in the past decade. / Photographs by Bob O’Connor