The ancient work is on full display in Life, Death & Revelry, which also features a brand new digital reconstruction of the object. 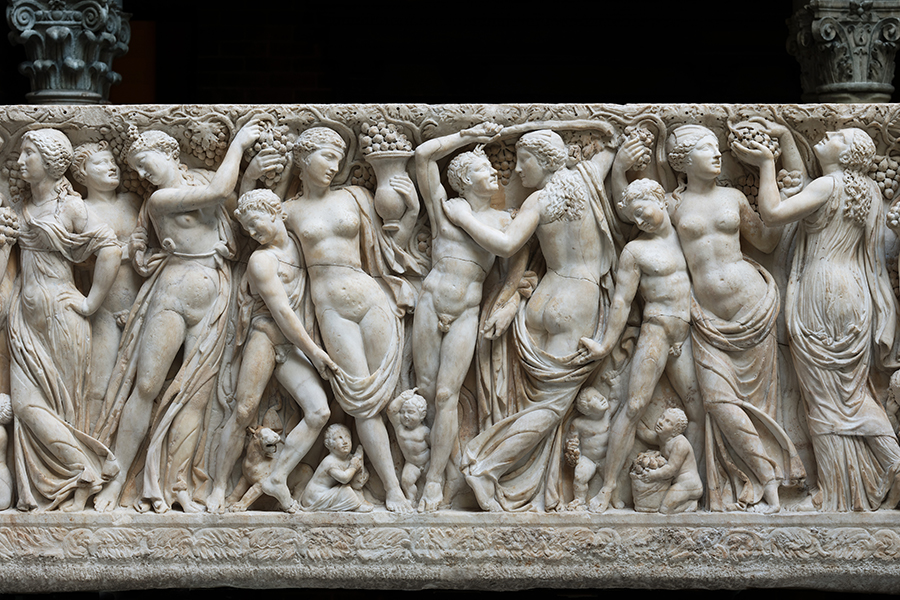 The origins of the Farnese Sarcophagus may date back to 225 C.E., but the Isabella Stewart Gardner Museum’s latest exhibition provides a distinctly modern take on the ancient work.

Opening June 14 and running until September 3, Life, Death & Revelry invites visitors to examine the marble object from all angles, both physically and digitally. Though the sarcophagus, which depicts scenes of Dionysian revelry, has been on display at the Gardner for more than 100 years, parts of it had been hidden from view. Now, the object is out in the open, giving visitors the chance to take in the entirety of the grand work, and then get even closer.

In addition to allowing patrons to see all sides of the sarcophagus, the new exhibition features a 3D projection of the object created using thousands of photographs and computer code. Set to dissonant cello music, the 13-minute long montage by artists-in-residence Paul Kaiser and Marc Downie brings a new perspective to the ancient work. The haunting, at times deliberately stilted piece draws viewers in hypnotically and reveals new details—flecks of blue, minuscule cracks—about the centuries-old object.

“It’s continually searching,” Kaiser says. “You feel like the work is making effort the entire time, as are you.”

The cellist Yeesun Kim, augmented by electronics, provides the soundtrack for the projection. Kaiser says the cello adds a human element to the futuristic, algorithmic work because the instrument is held so close to the performer’s body and because it is tonally similar to a person’s vocal range.

And the connections between the 3D replica and human beings go even further. Like a painting with errant splatters around its edges, the computer’s model is not perfect. Though machine-made projects are often perceived as immune to human error, this work is not without flaws. Visitors, Kaiser says, have to come to terms with and appreciate the imperfections.

“Be receptive and patient,” Kaiser says. “Before [the piece] works its magic on you, you have to accept its rhythm.”

In the process of restoring and studying the sarcophagus for the exhibition, the Gardner Museum’s conservation team discovered new details about the work. Not only did the experts find evidence that the object was once colored with pink, orange, purple, red, and blue pigments, but they also concluded it has Turkish, rather than Greek, origins. And so, in yet another way, the display marks a new chapter in the life of the sarcophagus.

“This exhibition traces this artwork’s journey from ancient Rome to 19th-century New England and allows us to place it in conversation with a contemporary new media artwork,” Dr. Christina Nielsen, the collection’s curator, said in a press release. “In this way, we follow the lead of Isabella Stewart Gardner, whose dynamic gallery installations allowed works of art to speak to each other across time and place.”