I Spent the Day with a Digital Ben Franklin

And you can, too, thanks to the Dreamland Wax Museum's new app. 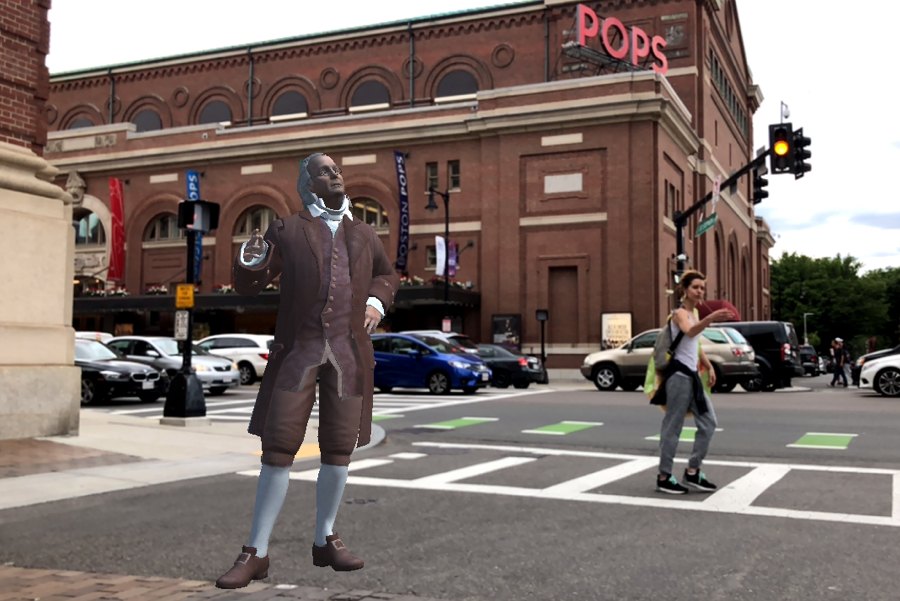 Ben Franklin out on the town, courtesy of the Dreamland Wax Museum App. | In-app photo by Spencer Buell

Since it opened next to City Hall last summer, the Dreamland Wax Museum has specialized in bringing historical figures and celebrities to life with, well, wax. But now, the tourist attraction is resurrecting them with pixels, launching an interactive app that harnesses the power of augmented reality—and which, for the last 24 hours, has consumed a good chunk of my life.

The app supplements the wax people-viewing experience inside the museum with little animations that pop up when you point your smartphone at its various exhibits. I’m sure it’s a lot of fun for the entire family to enjoy.

But the thing you need to know about the Dreamland Wax Museum’s new app is that no matter where you are, it lets you summon a cheerful, bespectacled Benjamin Franklin at the tap of a button. You could do this right now.

Fire it up, and you’ll meet the man himself, in period garb and belt-buckle shoes, ready to invite you to head on down to City Hall. He’ll appear anywhere you want him to—on the sidewalk, in your living room, on top of your desk—and give a short speech that somehow makes me smile every single time. “Hello! I’m Benjamin Franklin. Pleased to meet you,” he’ll say. “Did you know I was born and raised in Boston, Massachusetts? There is so much more to learn about the history of Boston, and there’s no place quite like the Dreamland Wax Museum to do just that!”

I won’t apologize for liking this little guy so much, or for being consistently wowed by what is at this point fairly commonplace app technology, ever since phone companies started making their products AR-compatible and Pokemon Go used the technology to break our brains.

It’s liberating, in a way the founding fathers could never have anticipated, to just make a cartoon man appear literally anywhere, while pedestrians and tourists around you have no clue that a miracle is taking place in their midst. Feel free to summon Ben Franklin anywhere you please. Take him out on the town. Have him give his speech at Whole Foods. Commute with Ben Franklin.

Dear @mbta, This guy has been following me all morning. Will not leave me alone. Keeps trying to start a revolution. Plz help #mbta pic.twitter.com/DDa0cLbuYD

Of course, the real purpose of the app is to promote the digital enhancements you can find at the museum itself. So give that a whirl as well. Aim it at the wax Steven Spielberg, and watch a virtual T-Rex clomp around the room. Visit the wax John F. Kennedy, and the app produces a life-like TV showing a news clip of JFK discussing the Cuban Missile Crisis, just as it might have looked if you were transported back in time. Use it with the George Washington exhibit, and a virtual George and crew paddle a boat across the floor.

“For us, it adds a layer of information on top of the characters here,” says Matt Sheils, the museum’s creative director. “It enhances that experience with technology in the way that a lot of people are seeing the world today: through their phones.”

Elsewhere in the city, more AR experiences await. A map inside the Dreamland app directs you to several historic sites, like the Bunker Hill Monument and Fenway Park, where the app can be used to trigger colorful animations and short speeches. Head to Quincy Market, for example, and you’ll meet a pistol-packing Sam Adams with giant hands. 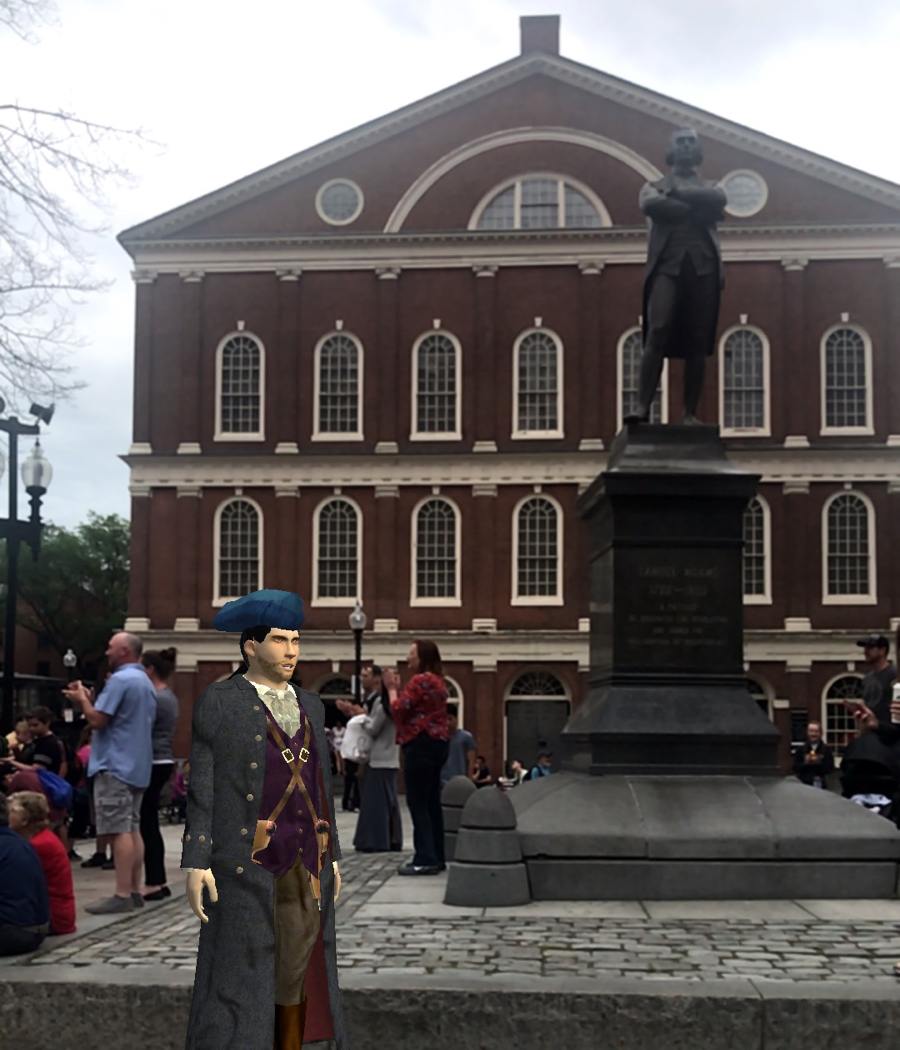 “Our contest is not only whether we ourselves shall be free, but whether there shall be left to mankind an asylum on earth for civil and religious liberty,” he’ll tell you.

Or stop by at Chinatown Gate, where you can find a slithering dragon. 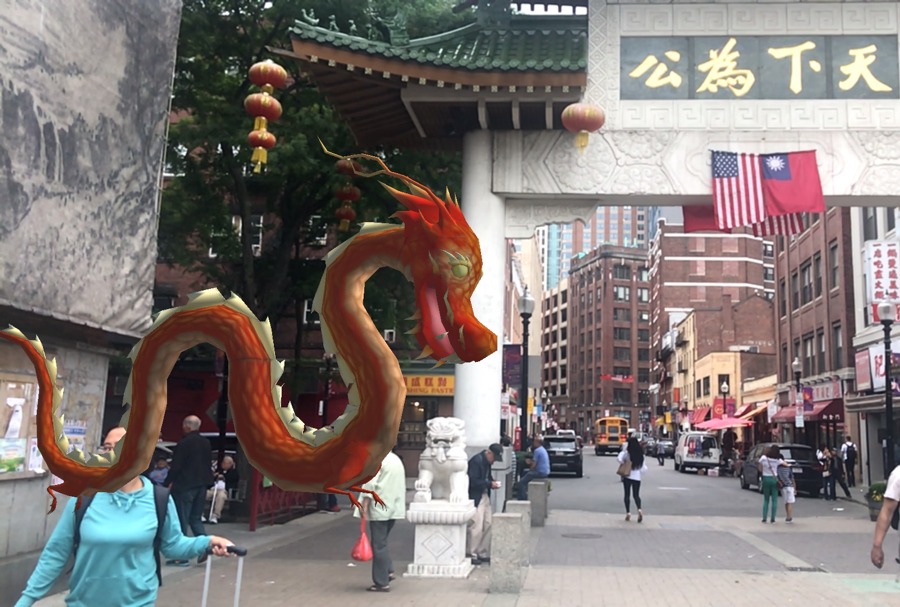 Inside the Dreamland Wax Museum lobby, you’ll find Paul Revere, on horseback (The good people at Dreamland gave me a special code that I used to make him appear in my office): 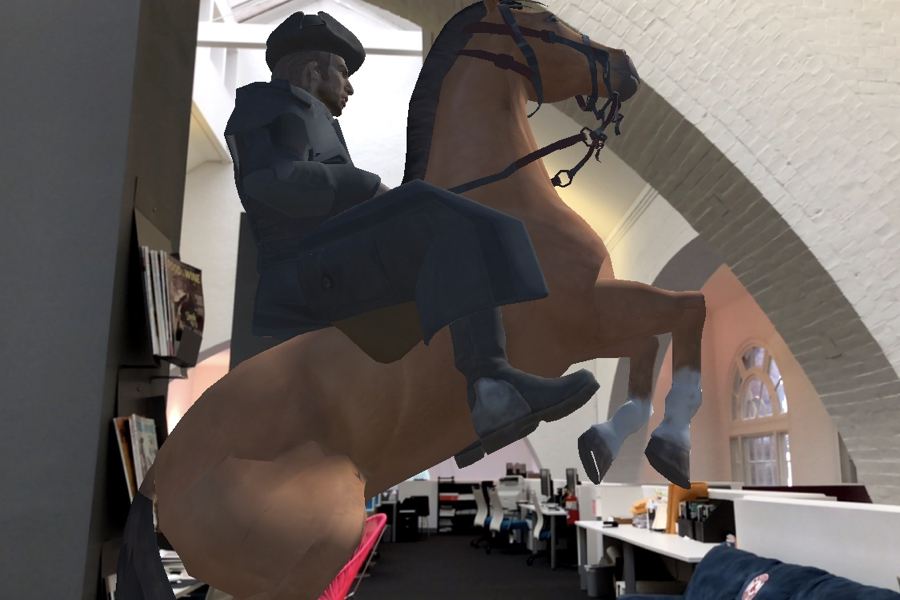 I also made George Washington do this: 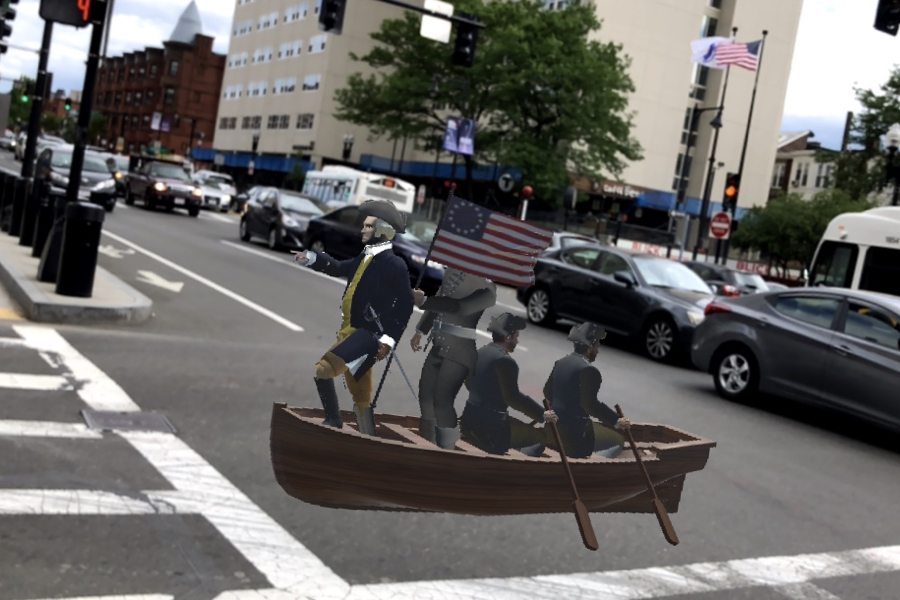 I’m having myself a time.

The app is the work of Connecticut-based ARsome Technology, which makes AR-fueled tools for museums and other clients looking to entice tech-savvy visitors. Demand for augmented reality products has spiked, the company’s CEO tells me, ever since the technology started popping up in SnapChat filters and wildly popular smartphone games. It’s particularly attractive to museums and historic sites, says CEO Benjamin D. Williams, because it can add some spice to a space without disturbing it. “It’s a modern way to complement the artwork,” Williams says. “Especially at a place like the wax museum, we can make them come to life. So why not?”

Dreamland is only the latest Boston attraction to put AR to use. The Gardner Museum now has an app that lets its stolen artworks re-appear on visitors’ iPhone screens. MIT last year debuted a series of AR-enhanced murals.

The purpose of this particular app, which has been available since May but is being promoted widely for the first time, Sheils tells me, is to link the relatively new wax museum with the rest of Boston’s historic sites and pay tribute to them. “We want to help tell that story and be part of that history in a really engaging and meaningful way,” he says.

I am very engaged. It’s also pretty effective advertising, if you ask me. Sure, it’s easy to ignore a stale, stationary ad on the subway. But what if the ad was Ben Franklin, loitering outside your building? 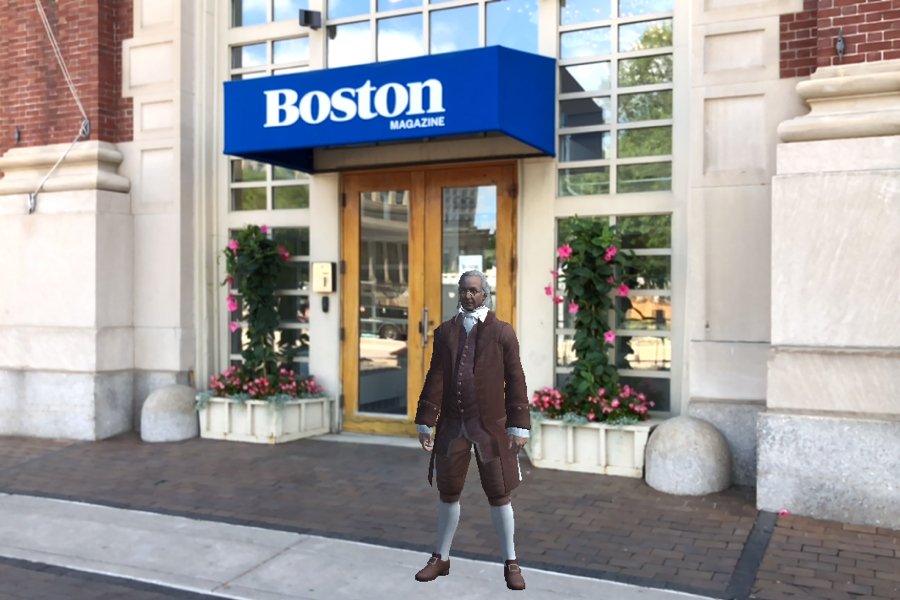