A multi-year update project at the historic Emerson Colonial Theatre comes as the theater prepares to host the premiere of the stage adaptation of Baz Lurhmann's movie. 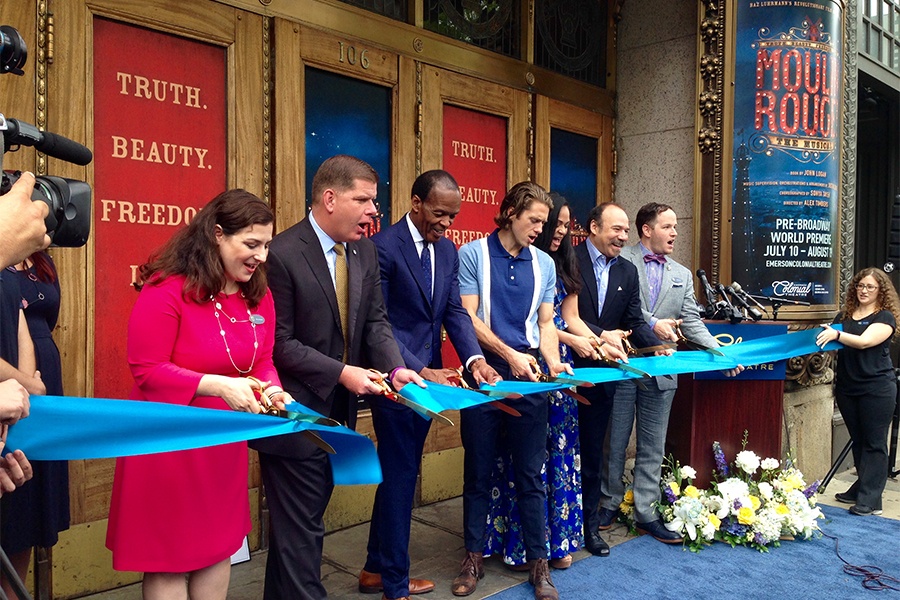 No, you’re not imagining lights on the marquees—the Emerson Colonial, Boston’s oldest operating theater and a longtime pre-Broadway tester, is finally reopening its doors after more than two years of renovations. And it’s about time, too: The storied theater is celebrating its shiny new backstage, restored period details, and converted VIP areas by hosting the world premiere of the stage adaptation of Moulin Rouge!, Baz Lurhmann’s beloved musical pastiche.

The show joins the ranks of such seminal 20th century productions as Porgy and Bess and Anything Goes, which made their debut at the Colonial before heading to the Great White Way. Now, thanks to the revamp, theatergoers can experience the same glamour that 1900-era Bostonians would have enjoyed—with the added benefit of fully modern conveniences.

The theater was set to open on June 27, until construction complications pushed back the big reveal. But the ribbon-cutting/box-office-opening took place as planned, with Mayor Walsh and Emerson College president Lee Pelton each wielding a pair of giant gold scissors. “This is an exciting moment for theater and the arts in Boston,” Dr. Pelton told the crowd. “The road was a little bumpy at the beginning, but we’re here, and we’ve managed to turn a lemon into a lemon-drop martini.” 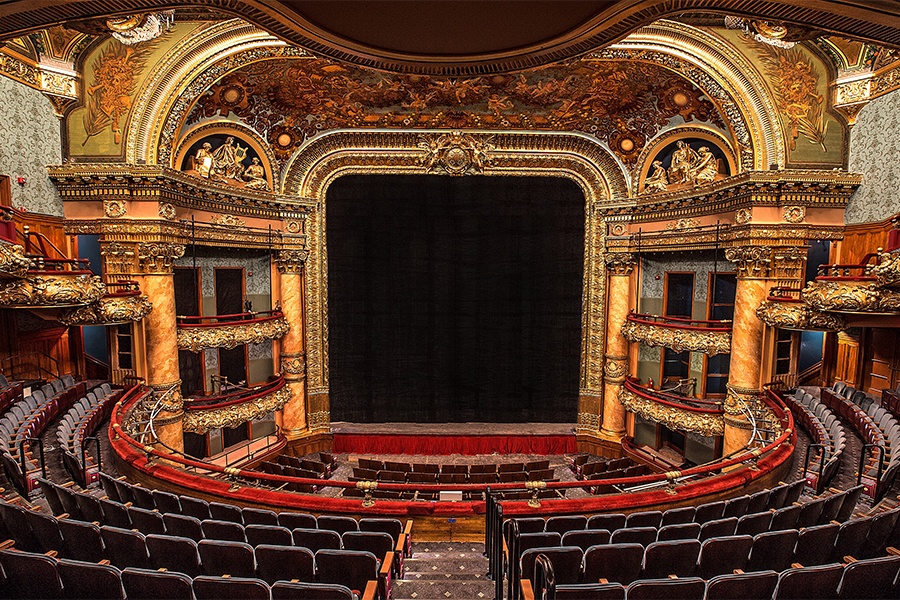 But it required some serious elbow grease (and a whole lot of paint) to get to this point. Ambassador Theater Group, which took over operations from Emerson College, wanted to maintain as much of the theater’s historical bones as possible. “So many people saw their first plays here, and remember something that changed them,” says ATG rep Robert Jones. “You feel the history in the walls, and we wanted to ensure those walls stayed beautiful.”

So while ledges on the box office were lowered for ADA-accommodation, the auditorium walls were re-painted in their original turquoise and motifs were stenciled back on by hand. Even the carpeting has roots—ATG drew from 19th-century lookbooks to commission the lobby carpet, and imported a design from the U.K. that matches the room’s original millwork. And beloved details—such as a chip in the onyx table in the former Ladies Lounge (caused by the late-and-great Bob Fosse choreographing a tap number on top of it)—remain untouched.

But of course, there’s always room for improvements. Here, they include renovated bathrooms, and an upgraded heating and cooling system. And with the addition of new bar spaces, you can grab a glass of frosé in what used to be the Ladies Lounge—and check yourself out in the room’s iconic mirrors, which are the originals from 1900. If you’re feeling extra-fancy, you can book the clubby Ambassador Lounge, where you’ll enjoy express entrance to the theater as well as a private restroom and cash bar.

Backstage, the dressing room wing was gutted to create larger dressing and makeup spaces, and a giant steel grid with a double-purchase counterweight system was installed for anchoring set pieces and equipment. “This allows us to do more diverse programming,” Jones says. “A show [or performer] will be able to come here and not have to bring in as much as if they went somewhere else.” 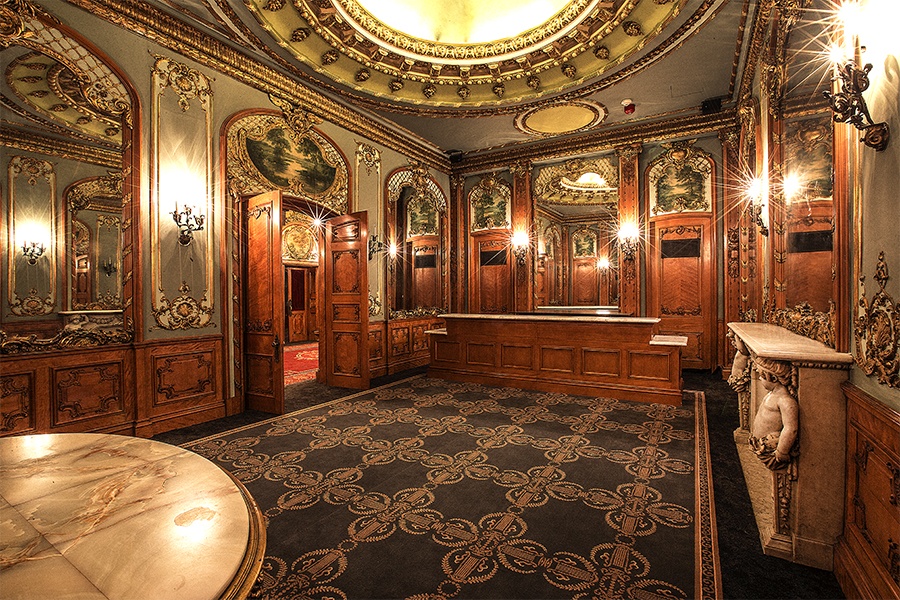 Who’s breaking in the space? The (long overdue) pre-Broadway run of Moulin Rouge!, starring Karen Olivo as Satine, Aaron Tveit as Christian, and Danny Burstein as Zidler. “I can’t wait for people to see how beautifully the show fits into this theater,” Burstein said at the ribbon-cutting. “It’s like it was made for this theater—it’s magical, it really is.”

Moulin Rouge! runs July 10 through August 19—come what may. “There are lots of surprises, but I think the people that know and love the movie will be satisfied,” Olivo said. 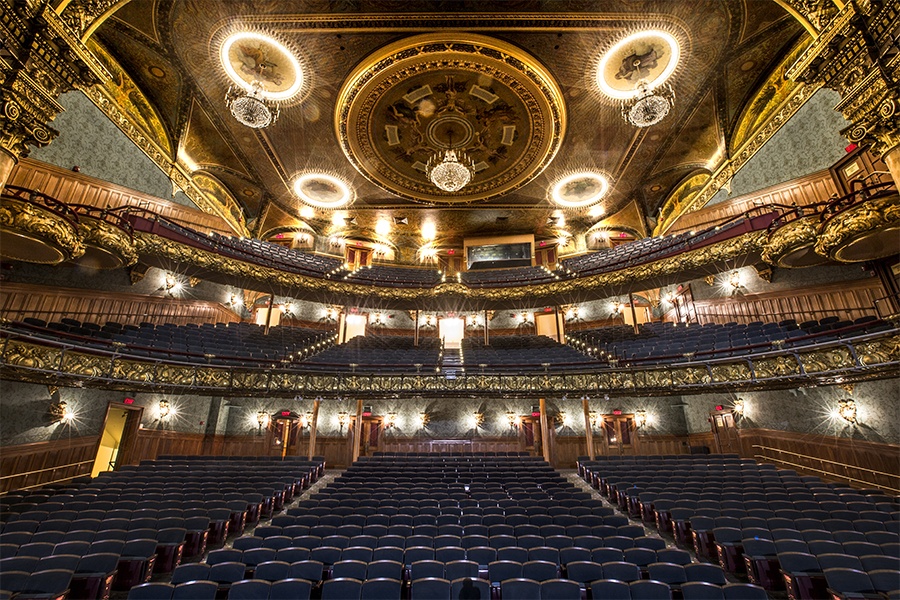