Seven Beach Reads by (and for) New Englanders

From history to romance and everything in between. 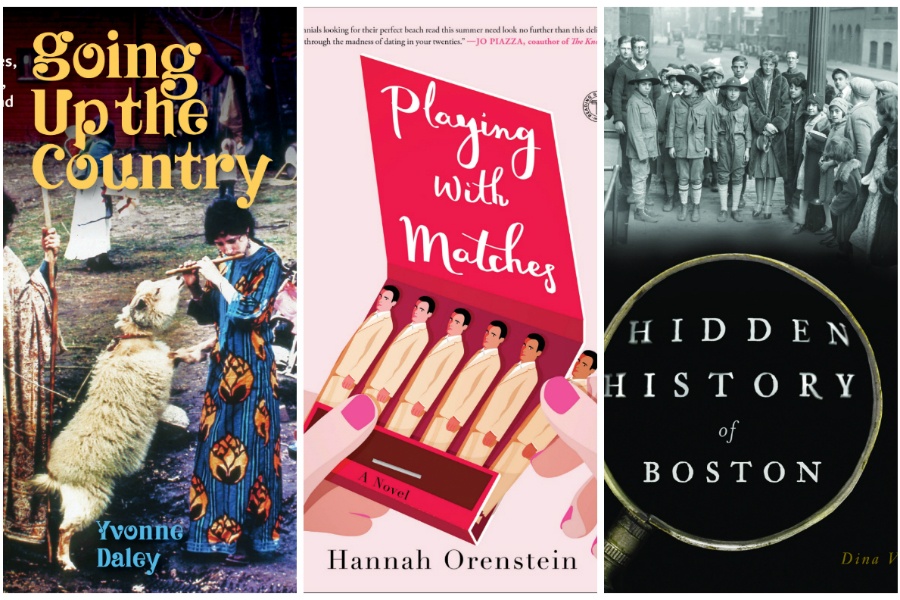 ‘Tis the season in New England—beach season, that is. You’ve packed the Polar seltzers in your Lilly Pulitzer cooler, slipped on your Jack Rogers sandals, and even remembered sunscreen, but your beach bag isn’t complete without a good beach read. Check out seven picks written by native New Englanders that’ll keep you page-turning, from Rocky fans to guilty-pleasure-seekers, as the waves crash ashore.

FOR THE VERMONT HIPPIE
Going Up the Country by Yvonne Daley

The rest of the country may point to San Francisco or New York City when talking about the counterculture movement, but New Englanders know better. Yvonne Daley, herself a migrant and eventual justice of the peace in one hippie-haven Vermont town, tells all about the free love, political radicalism, self-reliance, and more that blossomed in Vermont in the 1960s.

FOR THE ROM-COM ADDICT
Playing with Matches by Hannah Orenstein

Love in the age of Tinder is confusing, weird, and often hilarious—at least it is when told by Needham native Hannah Orenstein. Orenstein, now the dating editor at Elite Daily, draws upon her own experience as the youngest member of a New York matchmaking firm to weave an addicting story of love lost and found on the dating scene’s latest frontier: the Internet.

Fans of A Perfect Storm will be swept away by Boston-based journalist Rachel Slade’s exploration of how a container ship disappeared without a trace in 2015. Hundreds of interviews—with maritime experts and family members of the crew—piece together a story of fear, the aging shipping industry, and global warming that might make you scoot a few inches farther from the water.

FOR THE HUB HISTORIAN
Hidden History of Boston by Dina Vargo

You know all about Paul Revere’s ride, the massacre, and the tea party, but there’s more to Boston’s history than the stops on the Freedom Trail. Roslindale’s own Dina Vargo does a deep dive into the Hub’s lesser-known past, from protesting the Pope to civil rights activism. Pick it up for a few cool tidbits you can share at a cocktail party, stay for entire decades of history you never learned in school.

FOR THE BOSTON-BASED TRAVELER
Strangers in Budapest by Jessica Keener

Newton native Jessica Keener turns the story of a Bostonian family abroad into a gripping story of love, murder, and revenge in Strangers in Budapest. When Anne moves her husband and son across the Atlantic to escape her past, she only finds herself more entangled in a WWII veteran’s plot to avenge his daughter’s death—by hunting down his son-in-law.

FOR THE THOROUGHBRED NEW ENGLANDER
A Nantucket Wedding by Nancy Thayer

Nancy Thayer, perennial queen of the beach read, is back with another classic New England page turner. A Nantucket Wedding follows a beach wedding thrown off the rails by a shocking secret, distant daughters, and soon-to-be stepsiblings having less-than-familial feelings. You don’t have to actually read it on Nantucket, but it sure wouldn’t hurt.

FOR THE SPORTS FAN
Unbeaten: Rocky Marciano’s Fight for Perfection in a Crooked World by Mike Stanton

Rocky Marciano lives on as the only professional heavyweight fighter to never lose a single fight (or as the inspiration for Sylvester Stallone’s Rocky Balboa, depending on who you ask). Rhode Islander Mike Stanton goes past Marciano’s impressive 49-0 record and tells the story of his life outside the ring. Dealing with poverty, being the son of Italian immigrants, and battling corrupt mob leaders trying to rig the sport: Marciano rose above it all.