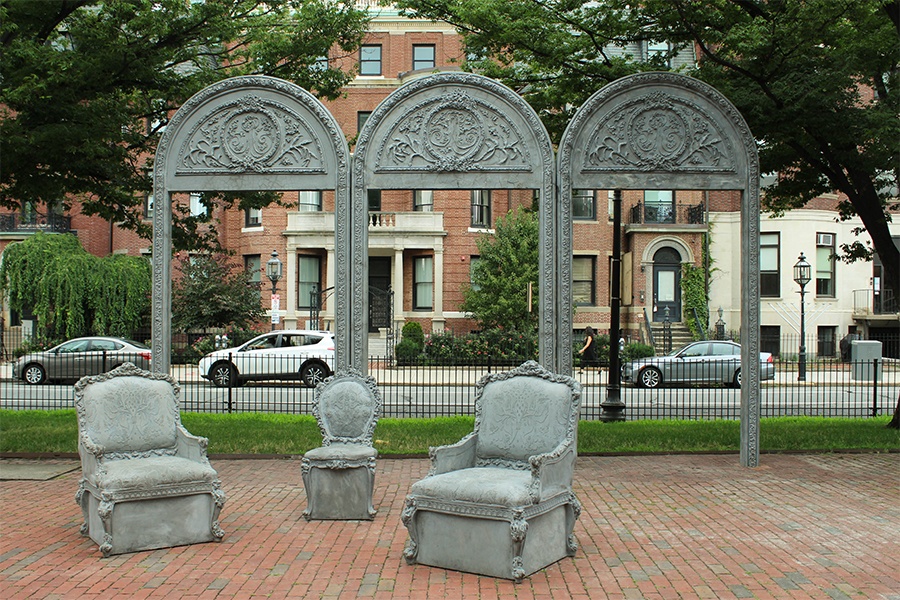 In 1888, the Commonwealth Avenue Mall opened as one of the first public spaces available to all Bostonians. At the same time, Boston’s elite were enjoying rapid financial growth inside opulent ballrooms and saloons, well out of sight from the masses.

Today, artist Liz Glynn bridges that gap with Open House, a public art exhibit on display on the Comm Ave. Mall through November 4. Twenty-six pieces of concrete-cast Louis XIV-era furniture are positioned on the mall—and they’re open for the public to lounge in.

Glynn, a Boston native and Harvard grad who now lives and works out of Los Angeles, originally exhibited Open House in New York City, where it greeted people at the southeast entrance to Central Park for over six months. Its move to Boston follows the movement of the Gilded Age during the late 19th century.

“In Boston, we are much more cognizant of our history and perhaps at times unwilling to let it go,” said Kate Gilbert, executive director of Now + There, a public art curation organization for greater Boston. “It’s a very intellectual city, I think the work will resonate with people who are looking at issues of socioeconomic divide, housing, the working class, the rise of leisure.” 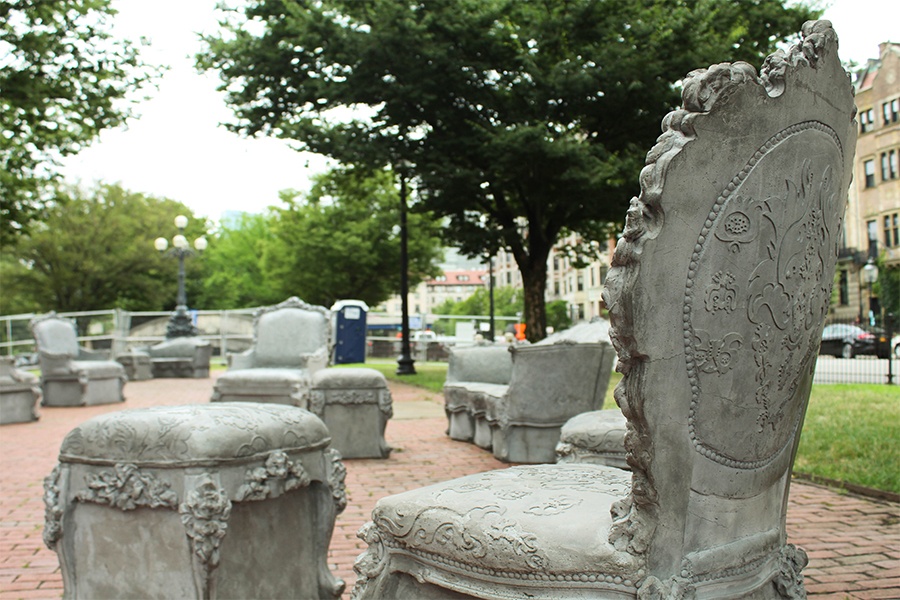 The design of the furniture and accompanying arches reference the ballroom of the William C. Whitney mansion in New York City. The designer of the Whitney ballroom, Stanford White, made his mark on Boston’s elite spaces in several Comm. Ave. mansions and the interior of the Hotel Buckminster, just steps away from the exhibit.

“It took us probably three months to find the right location,” said Gilbert. “This site pulls all these things together—the connection to the architecture of Stanford White, the connection to the Gilded Age time of opulence, but also a time of creating parks for all people.”

Now + There collaborated with the Public Art Fund and New York’s Paula Cooper Gallery to bring Open House to the Hub.

“We don’t have many examples of interactive public art [in Boston],” Gilbert said. “Unlike New York, where you’re sort of tripping over public art, you have to search for it here, you have to seek it out. I believe public art can bring us together and help us create an identity as Bostonians.” 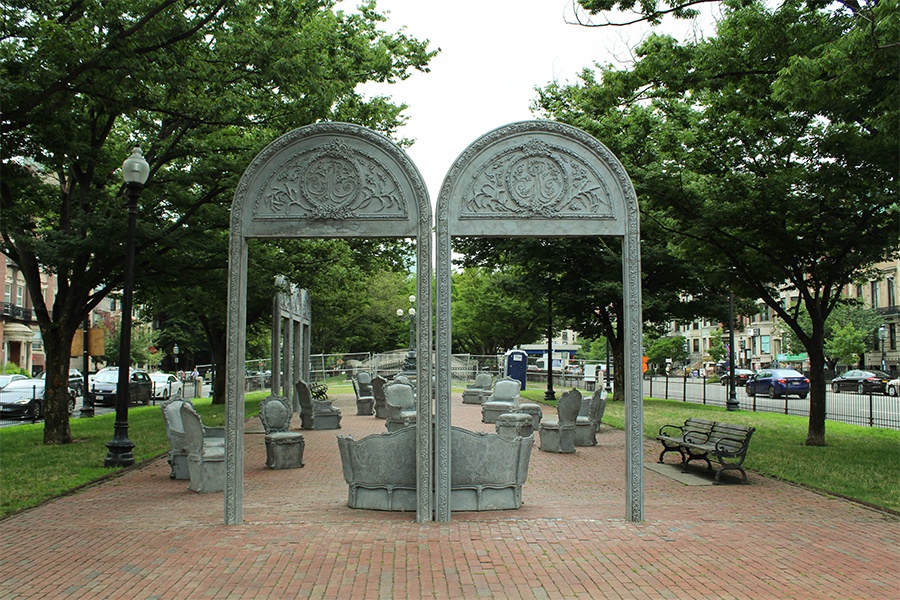 The title of Glynn’s exhibit, Open House, calls to mind the increasingly common for-sale signs littering lawns and sidewalks in cities all across the United States. Who can afford to be inside—let alone own—a space as opulent as a ballroom or a mansion these days?

The space is loosely defined by five ornately decorated arches, standing in a pair and a trio on perpendicular sides of the furnished area. It’s a vast reduction from the arch-lined walls of the original Whitney ballroom, but the feeling of enclosure remains without the accompanying air of privacy and elitism.

Concrete conveys the air of a dead space, a ruin that’s retained the markings of opulence, according to the artist. Gone are the days of ornate gold-plated silken sofas, ushered out by the utility and practicality commonly seen in modern public housing. Instead, members of the public are welcome to take a seat—not a very comfortable seat, but a seat—on a chair or sofa and consider the dynamics of public and private space, wealth, and power.

“When the public takes over an artwork, that’s when it’s a success for me,” Gilbert said while lounging on one of the concrete sofas herself. 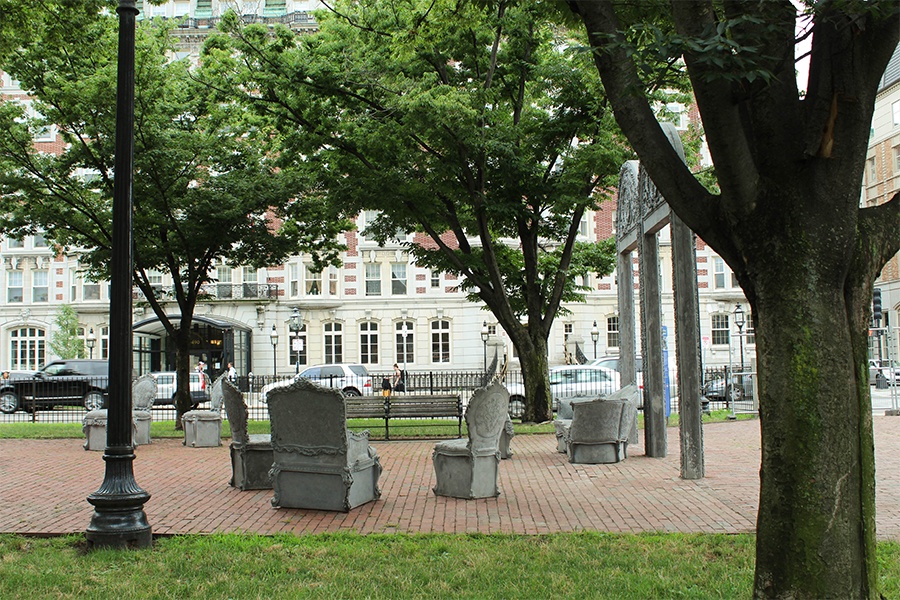 She and Glynn hope that the space becomes “a literal platform for people to come out and express themselves,” whether that’s hosting a jam session on the armchairs, having a photoshoot under the arches, or simply kicking back with a footstool. What matters to Glynn is that the public takes the situation she’s created and makes it their own.

The interactive nature of the work is in line with Glynn’s recurring desire to involve viewers in her art. Her current exhibit at Mass MoCA, The Archaeology of Another Possible Future, spans over 25,000 square feet and invites museum visitors to walk among the material byproducts of modern life.

Open House is on display at 499 Commonwealth Ave. through November 4. A public opening reception will be held with the artist and curators on Thursday, July 26 at 5:30 p.m.