Free Things to Do in Boston, August 2018 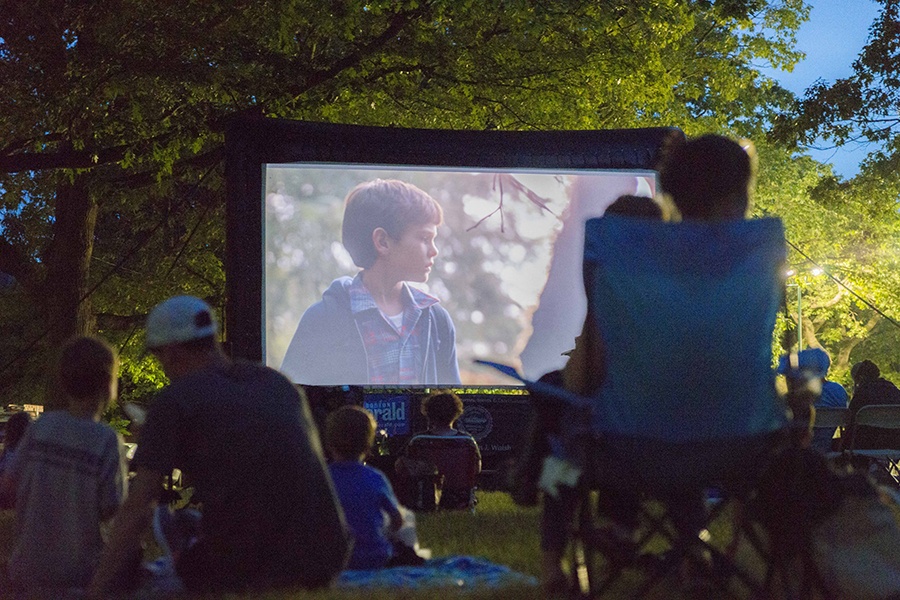 Victor Martin Aragon is a Berklee student and host of the Youtube music series “Avocado Sessions,” where he gathers his friends to perform gorgeous covers of songs in Spanish and English. As a part of the Berklee Summer concert series, Aragon will perform his stirring guitar music on the Commandant’s House lawn in the Charlestown Navy Yard as guests lounge with food truck and picnic fare and soak in the view of the Boston Harbor from one of the oldest buildings in Charlestown.

According to Deputy Commissioner Ryan Woods, Mayor Marty Walsh’s movie nights are “just another way to promote positive activity, community bonding, and meeting up in parks.” This summer, bring the whole family to a park in your neighborhood for a night full of recently released family-friendly movies like Paddington 2, Cars 3, and Pixar’s hit film Coco. Woods says that depending on the neighborhood, the turnout can be large or small, but thousands reliably convene on the Boston Common for the program’s annual classic film. This year, it’s Karate Kid.

“Expect to be amazed, to find out things you never knew before, to connect with people who are doing some wonderful things in the world,” says Karen Weber, Executive Director of Boston GreenFest. In its 11th year, this eco-friendly exposition is bigger and better than ever. From vendors, to live performers from almost every continent, to a food truck emporium, there’s plenty to be enjoyed at this annual festival in City Hall Plaza. This year’s theme is oceans, forests, and the sky. “We’re hoping that [the festival] is going to empower people to recognize that being a good environmental steward is not that hard,” Weber says. “But it starts from your heart.” On the unfinished fourth floor of City Hall, Greenfest transforms an atrium space into a mini FilmFest, where this year they will show a variety of environmental documentaries, including Sonic Sea, a film that addresses the damaging effect of noise pollution on marine life. Among other exciting installments, the festival features an EcoFashion show, moderated by WCVB’s Katie Thompson, and a festival-wide art installation made entirely from recycled plastic bottles and cardboard by the artist Robin Reed.

Whether you’re in the mood for a classic comedy, or a thriller that hits close to home, the Lawn on D has many genres to choose from in its outdoor movies this summer. Watch Mark Wahlberg hunt for the Boston Marathon bombers in Patriots Day on the 4th, and on the 10th, catch peak ’90s comedy Empire Records, which follows a wacky group of employees trying to save their beloved music store. 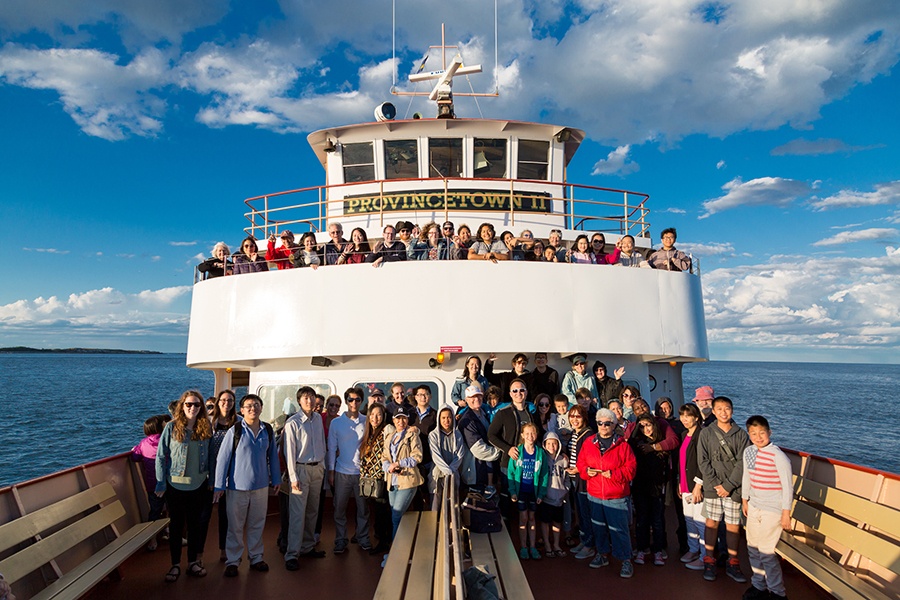 Many Bostonians would be sheepish to admit they’ve never taken the short ferry ride to visit the harbor islands. Bruce Berman, a spokesman for the nonprofit Save the Harbor/Save the Bay says that the free trips to Spectacle and Georges Island this summer are an attempt to introduce new audiences to the islands and the harbor. And it’s not just a free boat ride– these ferry tours are chock full of programming from the nonprofit’s youth environmental program staff. Berman explains that during the Age of Sail (an era spanning hundreds of years and ending in the 1800s), the average age of a ship captain was just 22 years old. Costumed performers on deck will tell the stories of six of these individuals, who come from “very diverse” backgrounds. Also on the agenda: guided beach walks, historical narration, touch tanks, and fishing. “There’s plenty to do, but if all you want to do is have a great day on one of the most spectacular urban natural resources on the planet, you can just come out and have some fun,” Berman says. 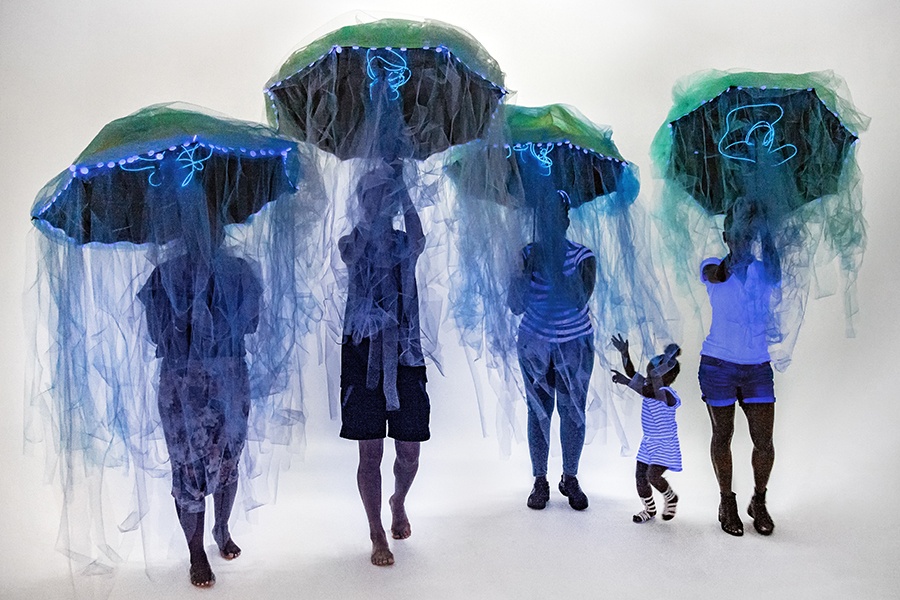 For the second iteration of the Isabella Stewart Gardner museum’s Neighborhood Block Party, Director of Communications Rhea Vedro says the museum is partnering with the stilt-dancing ensemble the Brooklyn Jumbies for a “cosmic cycles” theme. Amongst live music from Caribbean steel drum band Tempo Rhythm International, food truck fare, art-making and dance workshops, and fencing and martial arts demonstrations, the Brooklyn Jumbies will parade out “dressed as jellyfish, corals, and undersea creatures [with] bioluminescence worked into their costumes,” Vedro says.“It’s really this conceptual, beautiful art project that’s happening with the stilt dancers.” Artist-in-residence Laura Anderson Barbata designed the Jumbies’ “sculptural wearables…dealing specifically with cycles of the ocean.” Guests are invited to dance along with the Jumbies, as well as participate in “ocean and cosmic-themed activities.” Vedro assures that there’s something for everyone at this block party–even if you don’t live in the Fenway area. “It’s really the museum coming outside of our doors,” she says. “We’re delighted to be a part of our neighborhood.”

Saint Rocco was born in France in 1340 A.D with a cross-shaped birthmark on his chest. After a pious childhood, he vowed to live his life in poverty and distributed all his wealth among the poor. In 1929, the feast honoring this selfless saint was born in Malden. This year, the lively, Italian-American feast features raffles, home-cooked Italian favorites, a beer and wine garden, live music, and an appearance from local comedian Dave Russo. 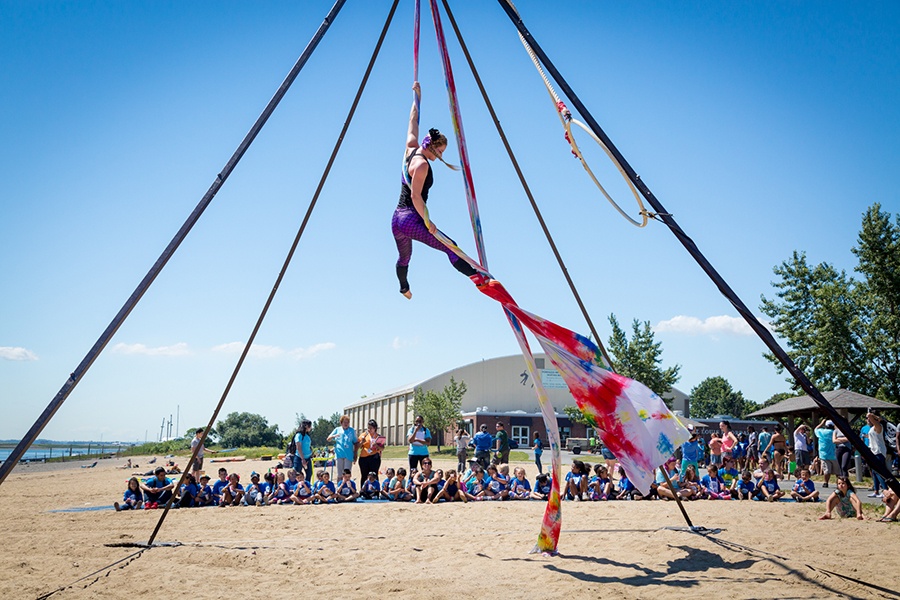 Looking for more fun from the Save the Harbor/Save the Bay folks? Check out their beachside festivals with art on the shore, face painting, and a “spectacularly talented” group of trapeze artists, aerialists, hula-hoopers, acrobats, jugglers, and more from the Boston Circus Guild. If you reserve any weekend for a beach day, make it one of these. As Save the Harbor/Save the Bay’s spokesman Bruce Berman puts it: “I’d urge everyone to remember: life’s a beach this year.” 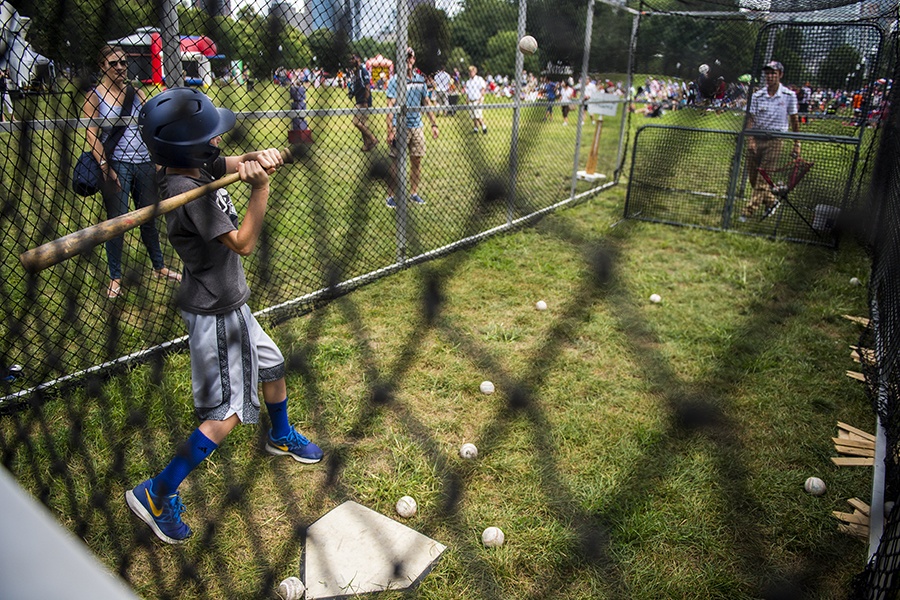 For the past five years, the Highland Street Foundation has transformed the Boston Common into Fenway Park. According to senior director of programs Noreen McMahon, the foundation tries to “mimic” all “the elements of Fenway Park [and] all the entertainment,” including a giant screen broadcasting the game, park snacks like hotdogs and popcorn, and batting cages and pitching machines from the Red Sox Mobile Showcase. Parents can lounge on picnic blankets and catch a free game, while kids enjoy kickball, wiffle ball, free carousel rides, and balloon animals. “Even if you don’t normally watch a whole baseball game, you can come together with family for a positive experience,” McMahon says. That’s the goal of the Highland Street Foundation, she adds: “to increase access to children and families who don’t normally get [these] opportunities.”

“Sounds of the Sea”

In their second collaboration with the New England Aquarium, the Boston Landmarks Orchestra seeks to address one of the most pressing issues in marine life preservation: noise pollution. “Human noise pollution is interfering with their way of life in all kinds of profound and distressing ways,” says conductor Christopher Wilkins. In one of her first appearances as the aquarium’s new CEO, Vikki Spruill will present about the aquarium’s mission, and their research into the impacts of noise pollution on marine life. But it wouldn’t be a Landmarks Orchestra concert without a riveting performance. Wilkins and the orchestra commissioned a new piece of music inspired by the sounds of the ocean from composer Stella Sung. The concert will also feature excerpts from Bernard Herrmann’s “Moby Dick” cantata and finishes off with Claude Debussy’s hauntingly gorgeous “La Mer.” “Altogether, it’s visceral and moving and upsetting and beautiful at the same time,” Wilkins says. “Arts make these issues, which are sometimes quite scientific, come alive.” 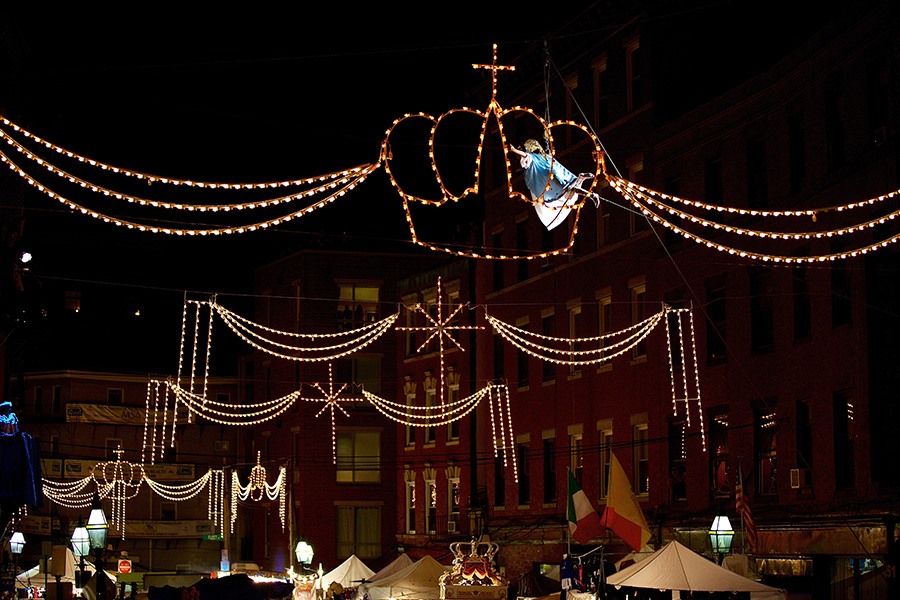 In its 108th year, the Fisherman’s Feast—though not the oldest North End festival—is the longest continuously running. Come for the delicious homemade Italian food, stay for the festival’s famous “Flight of the Angel.” Vice president and co-chair of the feast Domenic Strazzullo says the performance features “a little girl [that] comes flying out a second story window, gets lowered down, says her prayer, and then she’s hoisted back up with confetti coming from the rooftops and fireworks.” But it’s not a stunt to worry about, he explains. The angel uses a pulley system and theatrical harness to safely float down. In addition to the spectacle on Sunday night, the Fisherman’s Feast is hosting their first North End meatball competition. According to Strazzullo, twelve Italian restaurants will go head-to-head to show the hungry public who can craft the best meatball. The judges? Whoever wants to chow down on some juicy meatballs.

It’s not every weekend you get to see the indie pop band Bleachers perform in the Boston Common. Hosted by 88.9 WERS and Emerson College, the first iteration of this public music festival will feature artists such as Buffalo Tom and local singer-songwriter Juliana Hatfield. And in the spirit of public radio, the concert is free.

Our 2018 Best of Boston winner for best street festival is not one to underestimate. Experience cultural performances such as the Chinese lion/dragon dance, take a pit stop at the petting zoo, or play giant Jenga. Also on deck? Virtual reality experiences, and the best Asian food truck fare Boston has to offer—Bon Me, Chatime, and Kebabish are just a few.

Homemade science experiments, take-home art projects, face-painting and a visit from Zoo New England? Sounds like a recipe for a kid’s perfect day. At Franklin Park in Dorchester, play, learn and experience with kids of all ages in this festival designed just for little imaginations. 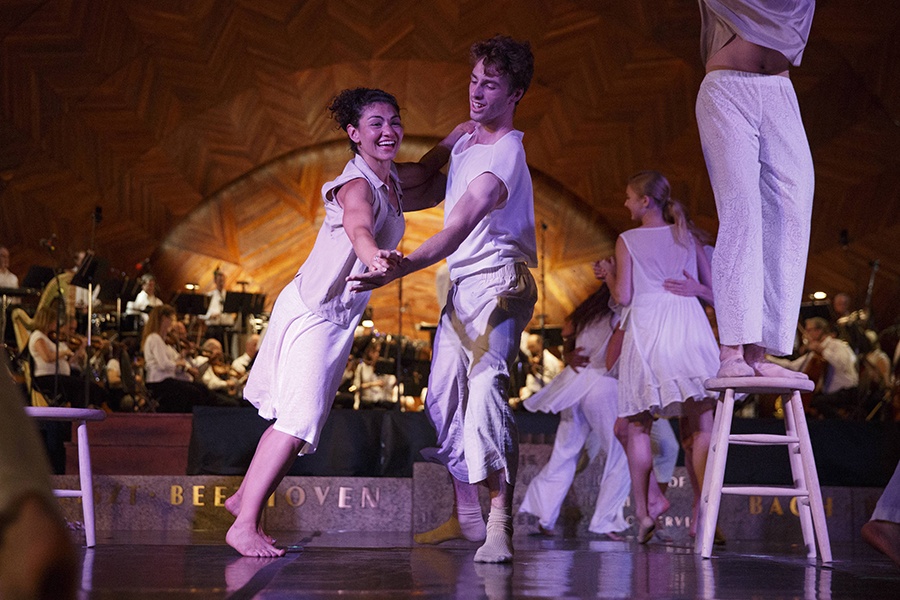 At the Hatch Shell on the Esplanade, get your groove on with the Boston Landmarks Orchestra, whose mission, according to conductor Christopher Wilkins, is “to perform great music in ways that allows access to these performances to all of Boston.” You won’t be able to resist getting up and grooving with the Boston Ballet, Camp Harborview, and Peter DiMuro’s Public Displays of Motion while the orchestra provides a soundtrack. This year, the orchestra is collaborating with Boston’s Korean Cultural Society to bring a traditional Korean Three Drum Dance to the stage. Wilkins describes the dance as a drumming, frame-banging, costumed coordination with the orchestra. “You kinda have to see it to understand what it is, but it’s gorgeous,” he says. 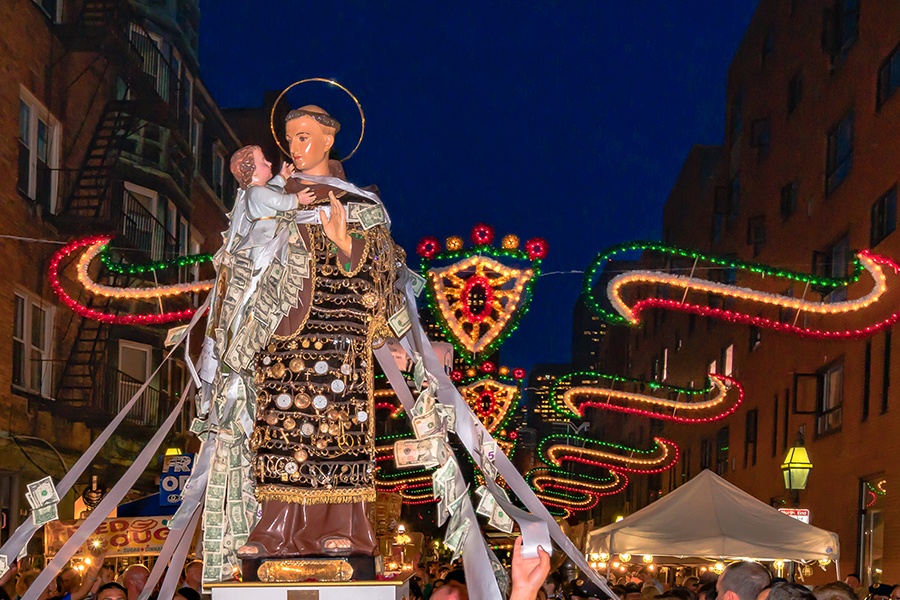 There’s no better way to get a crowd of Bostonians to the North End than by promising them boatloads of delicious Italian food—and that’s only one of the reasons Saint Anthony’s Feast can claim its title as the largest festival in New England. “It’s a celebration of Saint Anthony, but also the North End, and family,” says Feast Trustee Jason Aluia. On the last weekend of August, Saint Anthony’s Feast will celebrate it’s 99th anniversary with daily parades, live Italian-American entertainment, samples of mouth-watering North End food, and a culinary stage and tasting tent hosted by olive oil brand Filippo Berio. Each year, the festival culminates in a ten hour long procession of St. Anthony’s statue through the streets of the North End, gathering donations around his neck that help fund future festivals and local Boston charities. “It’s Christmas in August!” Aluia jokes.

2018 Films at the Gate Festival

Asian Voices of Organized Youth for Community Empowerment, or A-VOYCE, helps teenagers make a positive impact on their communities—especially through a practice known as “placemaking,” or utilizing a public space to promote community, wellness, and positivity. With Films at the Gate Festival, organized by A-VOYCE youth, enjoy local cuisine, martial arts performances, and popular Chinese movies such as Chasing the Dragon, introduced by Klyster Yen, father of the movie’s star Donnie Yen.

Hosted by the Shalupe Foundation, this festival celebrates the wide range of African voices in the Greater Boston area through cultural performances, African face-painting, and even an Afro-fashion show. In City Hall Plaza, listen to Haitian singer Valeria Larena, watch the OrigiNation Dance Troop perform, and laugh along to Nigerian comedian Omolewa Fagboore on a center stage in late August.