The Fog Sculptures Are Here and They Are Indeed Crazy Cool 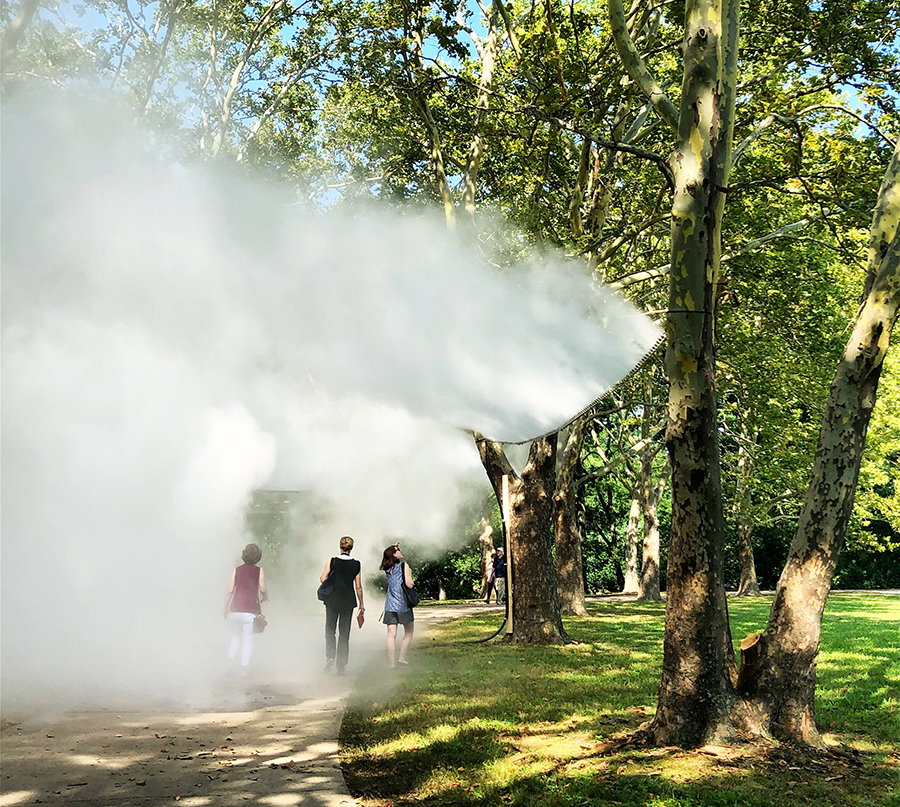 The immersive sculptures, which are on display in the Back Bay Fens, Olmsted Park, Jamaica Pond, the Arnold Arboretum, and Franklin Park, respond to the climates wherever they are. Soft clouds of fog will appear from dawn to dusk until October 31, shifting their shapes over the course of the day to react to wind patterns, humidity, temperature, and gravity.

Japanese artist Fujiko Nakaya has been sculpting with fog for 50 years, designing dreamlike settings all over the world, from Tokyo to Paris. The 85-year-old describes her work as a “conversation with nature” that aims to enhance a place’s natural features, rather than detract from them. It’s similar to Frederick Law Olmsted’s outlook on landscape architecture—as the leading designer behind the Emerald Necklace, he sought to create park environments consistent with a site’s original character, using native plants and rejecting showy gardening effects.

“It’s so open for any collaboration—first with nature, then with people,” she says. “It stimulates your imagination and frees you. And gives you a feeling that you can change, too. You know? It’s changing all the time.”

The sculpture closest to downtown is in the Fens, and it’s a short walk from the Necklace’s newly renovated Shattuck Visitor Center. There, strings of fog-producing nozzles form a canopy over the Fens’ tree-lined path. 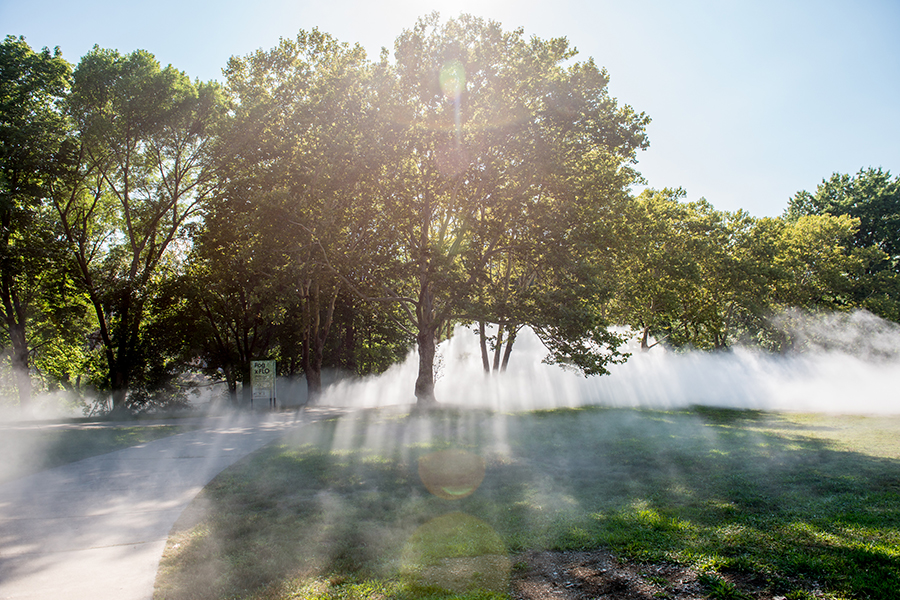 The Fens / Photo by Melissa Ostrow

The Fens / Photo by Melissa Ostrow 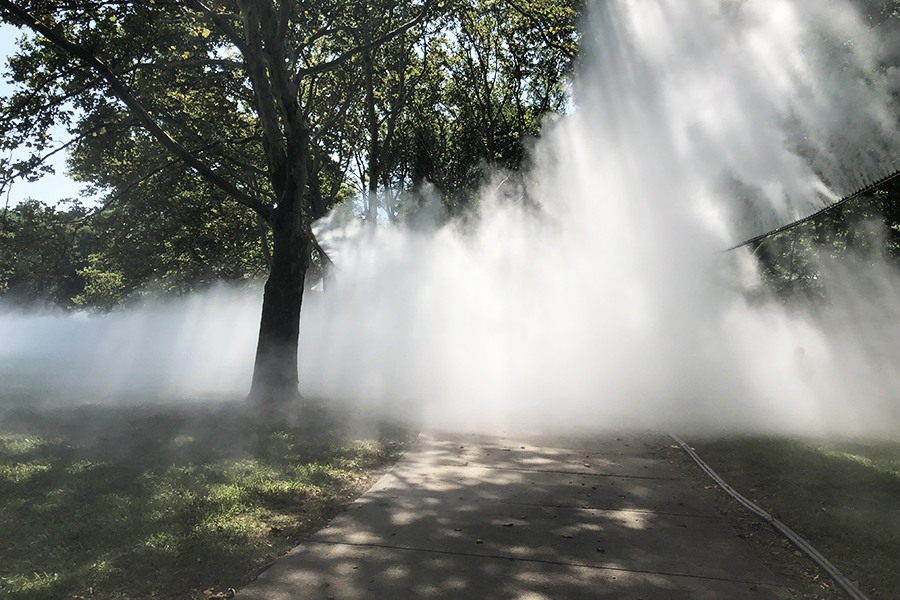 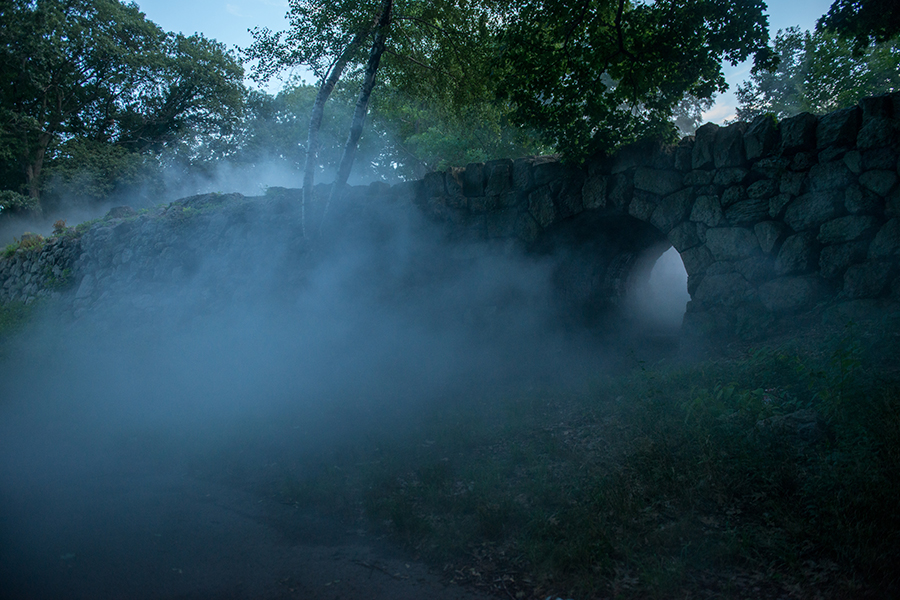 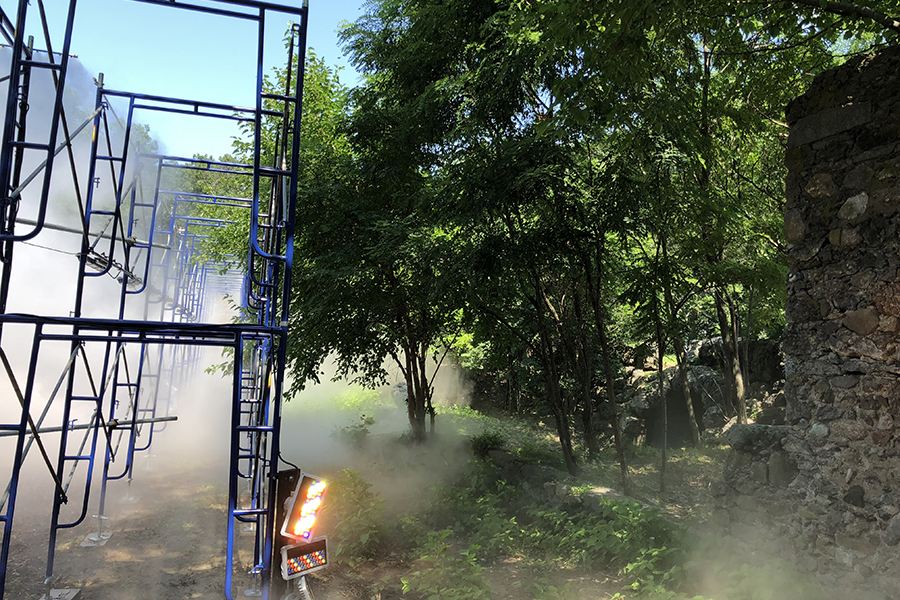 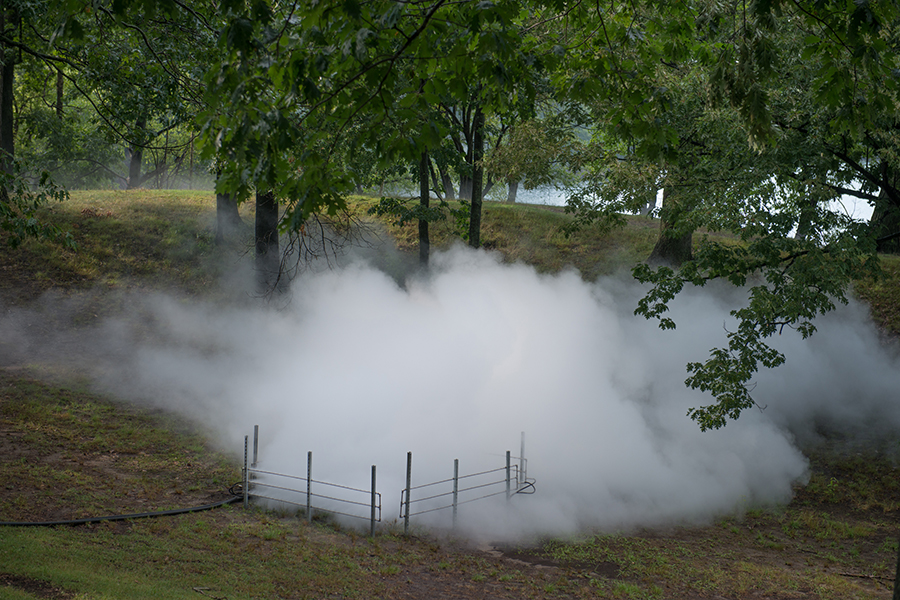 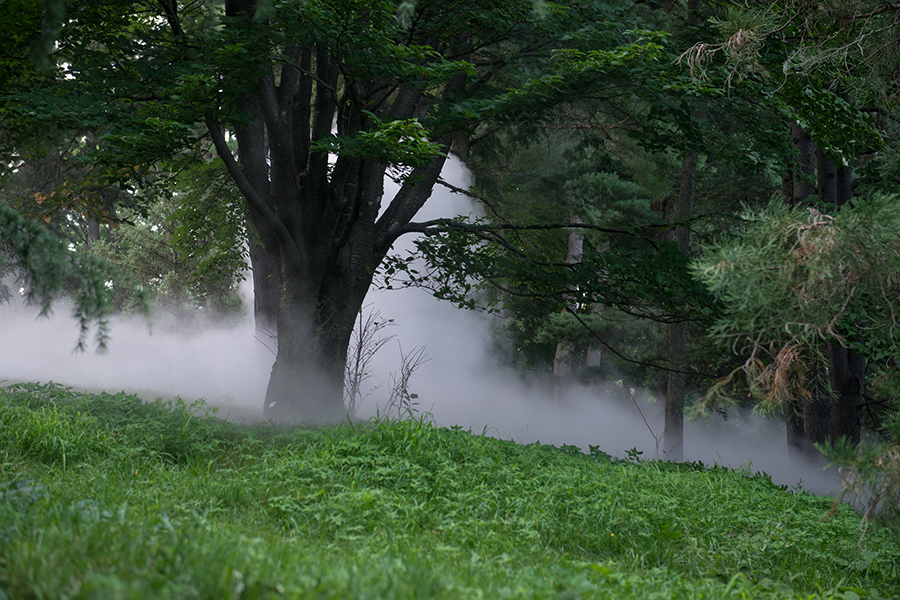 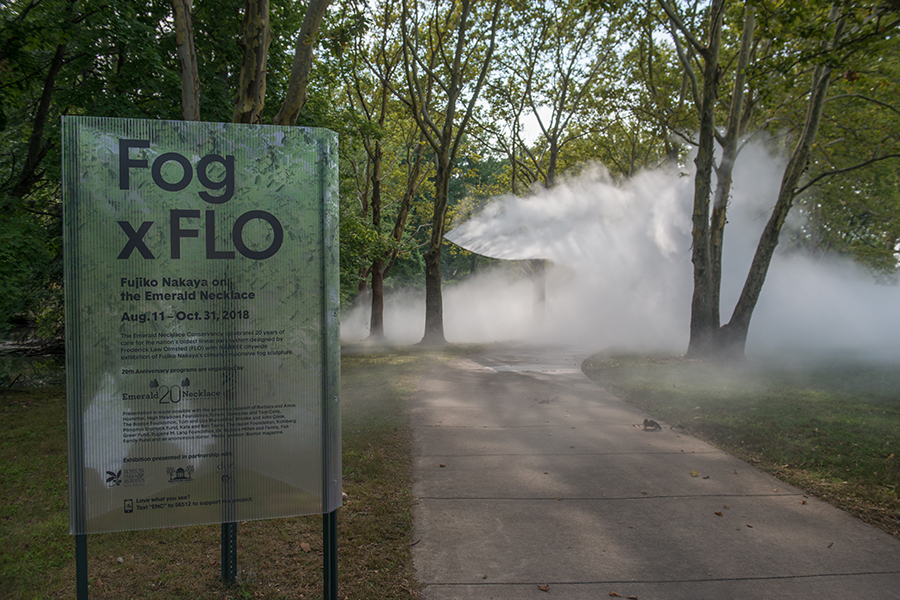 Fog also dances on an island in Leverett Pond in Olmsted Park, and it forms a “cloud pond” over a glacial depression next to Jamaica Pond. In the Arboretum, a “fog fall” rolls down a tree-covered hill. At the Overlook Shelter Ruins in Franklin Park, scaffolding helps the nozzles create a line of fog where the roofline of the shelter, a former field house destroyed by fire in the 1940s, would have been. Nearby multicolored lights create a dazzling effect.

The unpredictable nature of wind plays an important role in each sculpture, as breezes can carry the fog over parkland.

“I used to be very afraid of wind. I tried to control it, to tame it,” says Nakaya. “Now I know a little more about its behavior and can talk with it. I use my senses rather than try to control it. I respond with it, adapt with it. I’m learning words to converse with it. I’m a little more confident. I trust the wind more now and let it perform, and I help it to perform even better.”

So, what’s it like to take a stroll through the fog? It’s a bit disorienting at first. Figures seem to disappear into the fog, and once you’re in the midst of it, you can only see what’s directly in front of you. And despite causing a bit of frizzy hair, being shrouded in water vapor in the middle of a city is a cooling, calming experience.

Like Frederick Law Olmsted intended his parks to be, “Fujiko’s work is also so democratic and so open,” explains Karen Mauney-Brodek, president of the Conservancy. “It doesn’t require language or understanding. You can come from any kind of background to appreciate it and I really love that. It doesn’t need a lot of explanation. It’s just experiential and for everyone—including dogs.” (Dogs have taken a special liking to the sculptures, according to Nakaya.)

The Conservancy is organizing “fog performances,” so artists across the city can create programming to coincide with the exhibition. So far, there’s music inspired by Duke Ellington’s Lady of the Lavender Mist at Franklin Park. (Ellington used to perform at the Overlook Shelter Ruins in Elma Lewis’ “Playhouse in the Park” series in the 1960s.) Recorded by Berklee’s Neil Leonard, the songs will play every Saturday and Sunday at sunset. Percussionist and composer Maria Finkelmeier of Kadence Arts will perform Flow Through at the Arboretum this fall, and the BPL’s former composer in residence, Beau Kenyon, is orchestrating a dance performance in the Fens in September. A full calendar of performances is available here. 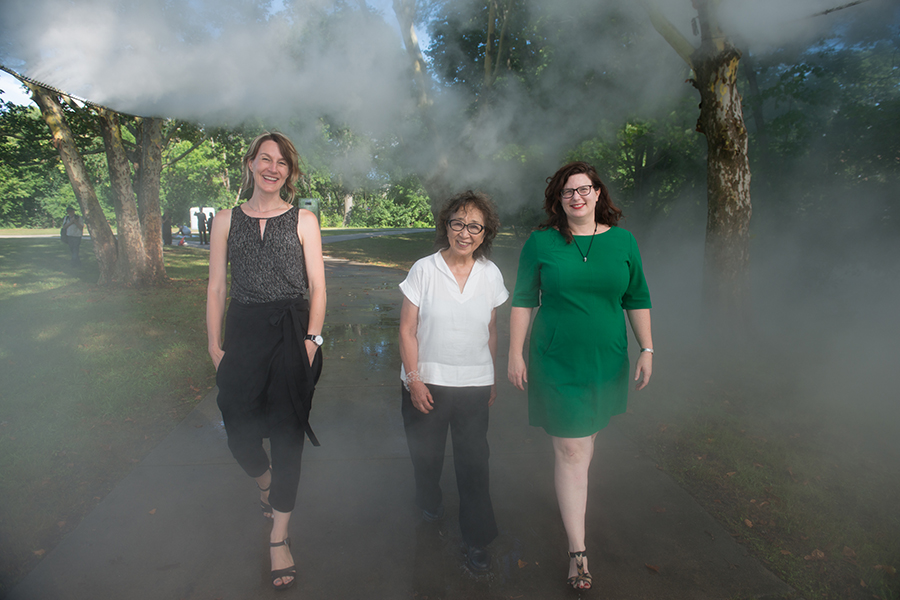