The Huntington Theatre created it as a way to experience the Fog x Flo public art installation along the Emerald Necklace. 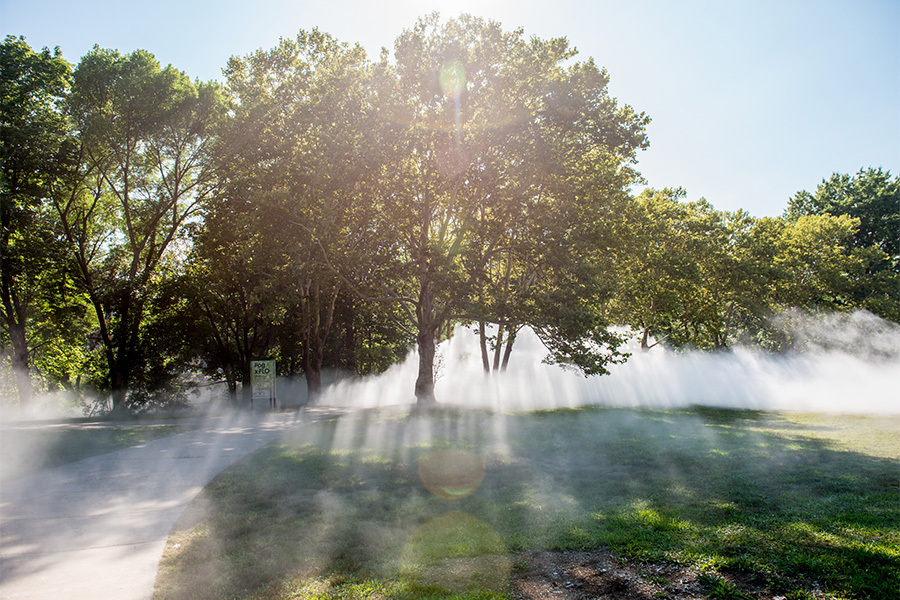 The fog sculptures along the Emerald Necklace have already proven to be a hit among Bostonians, if your Instagram feed is any indication. Visitors have been awestruck by the interactive Fog x FLO exhibit, which encompasses five different parks, each offering an opportunity to watch the fog engulf beaches, trees, and passersby.

While August offered chances to enjoy live music and dance performances in the fog, this next month promise a new way to experience the displays by listening to a Sherlock Holmes audio play.

The audio play, produced by the Huntington Theatre Company and written by Boston University graduate and local playwright Walt McGough, finds the determined detective trying to locate the lost brother of American aristocrat Miss Wayfair. And of course, it’s riddled with the usual twists and turns of any Sherlock tale.

The Holmes story, fittingly entitled “Sherlock Holmes and the Case of the Emerald Necklace,” takes place on the Clemente Field Path in the Back Bay Fens, Leverett Pond in Olmsted Park, Jamaica Pond, Hunnewell Hillside in the Arnold Arboretum, and the Overlook Ruins in Franklin Park. Each part of the play is around six to eight minutes in length.

McGough says he grew up reading the detective stories and watching various adaptations as a child.

“It was a fun chance to write something sort of fun, a little tongue-in-cheek with Sherlock, and matching those atmospheres of a really cool installation,” he says.

Each phase of the five-part mystery aligns with the environments created by the sculptures, and the foggy, moor-like landscape created by the fog is a close parallel to Sherlock’s England. The audio play refers to specific landmarks in the parks, including the various trees, ponds, and lakes.

“There’s this chance for the environment to actually reinforce the story a little bit, and hopefully people will get more swept up into the mystery of the characters,” McGough says.

The idea to produce an audio experience was driven by the interactive nature of the exhibit itself, he explains. While a visual could have been compelling, an audio play does not take away from the sight of Nakaya’s beautiful sculptures.

McGough says it’s a fun way to make something broadly accessible for visitors that “would not stand in the way of the fog at all.”

In addition, the audiobooks allow for greater flexibility and personalization for the listener. A staged production would have lasted a few days, but an audiobook grants people prolonged access to the story.

“You can experience them on your own terms,” he says.

He says even though writing the audiobook was intimidating at first, he mainly reminded himself of the fun aspects of the Sherlock stories.

“The stories are funny, and at the same time, are serious and mystery-minded,” he says. “There’s something goofy about them, too.”

McGough says that while the play alludes to previous Sherlock plots, it will still appeal to those who aren’t familiar with the series, as there are several unique twists on the genre.

“I hope it surprises people, and I hope people have fun with it,” McGough says. “[I hope] especially that people go out and see the fog sculptures, because they’re breathtaking and amazing to look at.”

All five parts of the play are available for download at huntingtontheatre.org and will be streaming until Oct. 31.