The Top Five Things to Do at the Boston Book Festival

Browse the shelves at the marketplace, catch a musical performance, or see a panel featuring John Kerry at the 2018 Boston Book Festival. 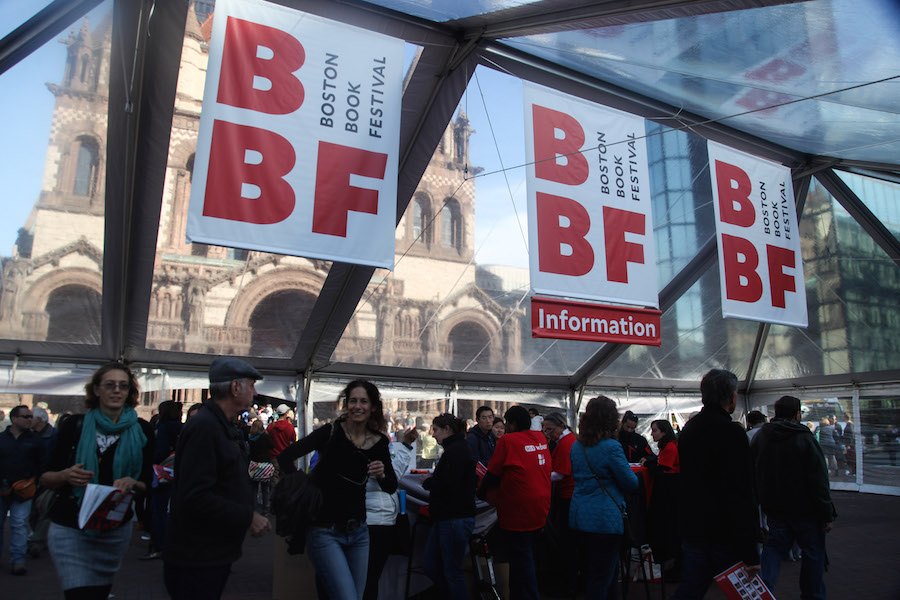 The annual Boston Book Festival is coming up right around the corner on October 13, and the event has only gotten bigger since its debut in 2009. With so much going on in one day, even the most dedicated book lovers could have trouble prioritizing. That’s why we’ve taken the liberty of highlighting a few things you definitely don’t want to miss out on this year. Here are our top five picks for things to do at Boston’s premier literary festival.

Check Out the BBF Marketplace in Copley Square

For the duration of the festival, Copley Square will be filled to the brim with almost 70 different exhibitors, including independent publishers, arts organizations, and food vendors. Just about anyone can find something they’ll enjoy here, whether that means browsing the shelves for a great find, enjoying refreshments from the likes of Zinneken’s Waffles and Chameleon Cold Brew, or even participating in one of the kids area’s many events, including a scavenger hunt and several readings.

Visit the New Locations in East Boston and Roxbury

This year, the Boston Book Festival is expanding to include two events dubbed Neighborhood Festivals in East Boston and Roxbury. These events will feature speakers and panels from the main festival as well as a handful of additional presenters and performers from around the community. The East Boston festival will include a performance by Veronica Robles and her all-female mariachi band. The Roxbury event features a conversation between playwright Liza Jessie Peterson and Black Arts movement trailblazer Askia Touré about the intersection of art and activism.

Catch a Performance at the Berklee Stage

The Berklee Stage is the BBF’s annual music and performance showcase in Copley Square. It runs all throughout the day with a handful of varied and always entertaining performances from artists and musicians. This year’s schedule features an afternoon performance by Detroit singer-songwriter Malaya, who has performed alongside the likes of Aretha Franklin and John Legend. It will also include a presentation from the Shakespeare Time-Traveling Speakeasy, a group performance piece that incorporates poetry, storytelling, and contemporary musical styles like hip-hop, jazz, and funk to celebrate the works of William Shakespeare.

Of the dozens of fiction events at this year’s festival, the one that stands out the most is the keynote presentation from novelist Tayari Jones. Author and GrubStreet artistic director Christopher Castellani will interview Jones about her novel An American Marriage, which follows a newly married young black couple as the husband is wrongfully accused of sexual assault and subsequently imprisoned. The novel was a New York Times bestseller and an Oprah’s Book Club Selection. If you can’t make it to the keynote session, we recommend you check out Jason Lutes’s presentation of his graphic novel Berlin earlier in the day. The publication of the final volume of Lutes’s epic graphic novel represents the culmination of twenty years of work and was one of the most anticipated releases of this year. The series is bound to fascinate casual readers and graphic novel diehards alike as it charts the story of the Weimar Republic and the rise of fascism in Germany in remarkable historical detail.

If you’re looking for a more nonfiction-focused visit to the festival, we’ve got you covered. There are myriad nonfiction presentations at this year’s Boston Book Festival, all equally interesting. Among the most exciting of these is the festival’s opening keynote with Michael Pollan, author of such bestsellers as The Omnivore’s Dilemma and The Botany of Desire. In a conversation guided by WBUR’s Meghna Chakrabarti, Pollan will go into detail about his new book How to Change Your Mind: What the New Science of Psychedelics Teaches Us About Consciousness, Dying, Addiction, Depression, and Transcendence. We would also be remiss if we failed to mention the de facto headliner of this year’s festival, “On Leadership,” a panel consisting of former Secretary of State John Kerry and historian Doris Kearns Goodwin. Samantha Power, the permanent US representative to the United Nations during President Obama’s second term, will serve as moderator for the talk. This wide-ranging conversation represents a rare opportunity to hear three luminaries in their fields reflect on how the leadership of the past, present, and future will continue to shape our country.