A Whimsical Art Boat in the Fort Point Channel Has Sunk, but Will Float Again

A sailboat hull topped with a coral reef and giant orange octopus capsized in high winds this week, and a rescue mission is underway. 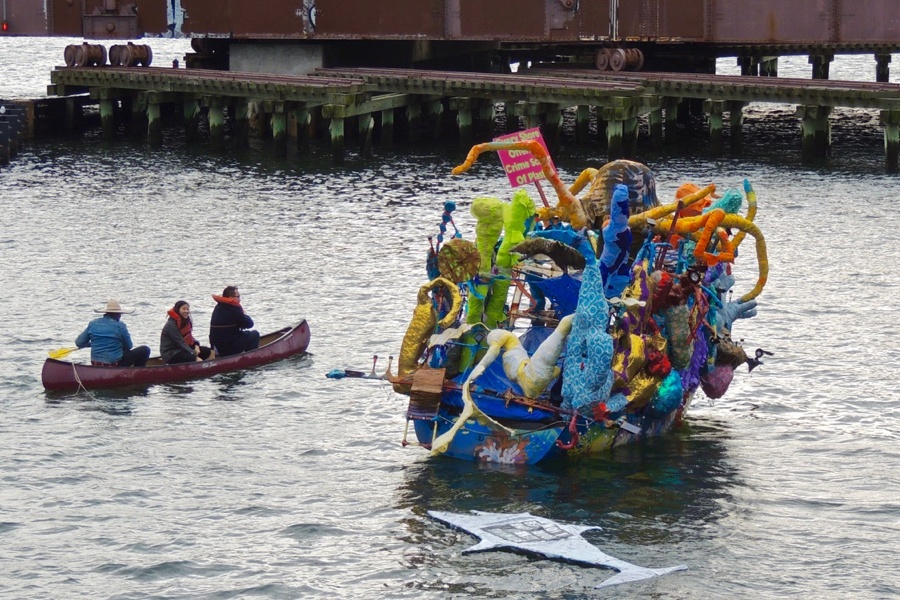 An ocean-themed floating art project that set sail in Boston’s Fort Point Channel over the weekend has ended up, well, under the sea. But fear not: A rescue mission is underway, and it will live to float again.

“We’re literally righting the ship as quickly as we can,” Emily O’Neil, executive director of the Fort Point Arts Community, tells me.

Made of reclaimed litter wrapped in cloth mâché and stacked more than 10 feet high in the hull of a 22-foot-long sailboat, the piece features a tangle of multicolored shapes, various sea creatures, and a giant orange octopus, which is holding a sign reading “Now I Go Fishing To Catch Pollution” in one of its spindly tentacles. It’s been anchored in the channel since Friday, the latest in a series of floating public art pieces commissioned by the Fort Point Arts Community.

Tragedy struck overnight on Monday, when winds gusting up to 45 miles per hour rocked the vessel mercilessly. By morning, the Create Coral Reef had taken on water, and from the nearby Congress Street bridge, only a technicolor jumble could be seen poking up at the surface.

Jerry Beck, the artist behind the piece, got the news in a text on Tuesday, after a number of people spotted the capsized artwork and posted about it on social media.

“I was heartbroken,” Beck says. “Wind is a powerful thing. You forget, and I grew up in Florida with hurricanes. You just keep forgetting until it happens to you.”

The project comes from the Revolving Museum, Beck’s well-known arts group founded in Fort Point in 1984. Now based in Fitchburg, the organization enlists the help of volunteers, including children from the area (its most recent feat: building the world’s largest paper airplane.) Beck says the project was designed to evoke the fragile and beautiful coral reefs of his native south Florida, which have been devastated by ocean acidification and are in danger of being wiped out.

Despite all of its ornamentation, Beck insists the  boat was seaworthy. A nautical expert helped him top it with plywood and pull waterproof material tightly across its surface “like a drum.” The “reef” structures, made of plastic and cloth, weigh almost nothing at all. It should have been able to stay undisturbed for the rest of its run on the Fort Point Channel, where it’s scheduled to float through mid-December. That is, until some powerful New England gales pushed it past its limit and dunked it earlier this week.

So now a rescue operation is underway. A crew from a nearby boat salvaging company will be dispatched to the channel on Friday or Saturday, he says. A crew complete with scuba divers will have to pump water out of the boat and attach it to flotation devices before it can be towed ashore, he tells me. From there, Beck says, it will be driven back to Fitchburg, where the plan is to reassemble the art on something more sturdy, like a barge. Then it will be back within “a week or maybe two weeks.”

It won’t be easy. “It has like 10 feet of sculpted trash that is now gonna be completely waterlogged,” says Tim Peters, operations manager at TowBoatU.S. in Quincy, which Beck has contacted about salvaging the boat. “Once you raise it up, it’s so top-heavy that the thing has lost all stability. So it’ll be quite interesting to see how that all goes down.” He adds that the operation will likely cost “a few grand.”

Thankfully, it does not look like any of the art project’s components drifted away when it sank. All of it was held up with sturdy rods of bamboo, and lashed together with extra-strong tape that appears to have weathered the storm. And yes, that includes the huge octopus, which Beck assures me is in good health. “It’s indestructible,” he says. 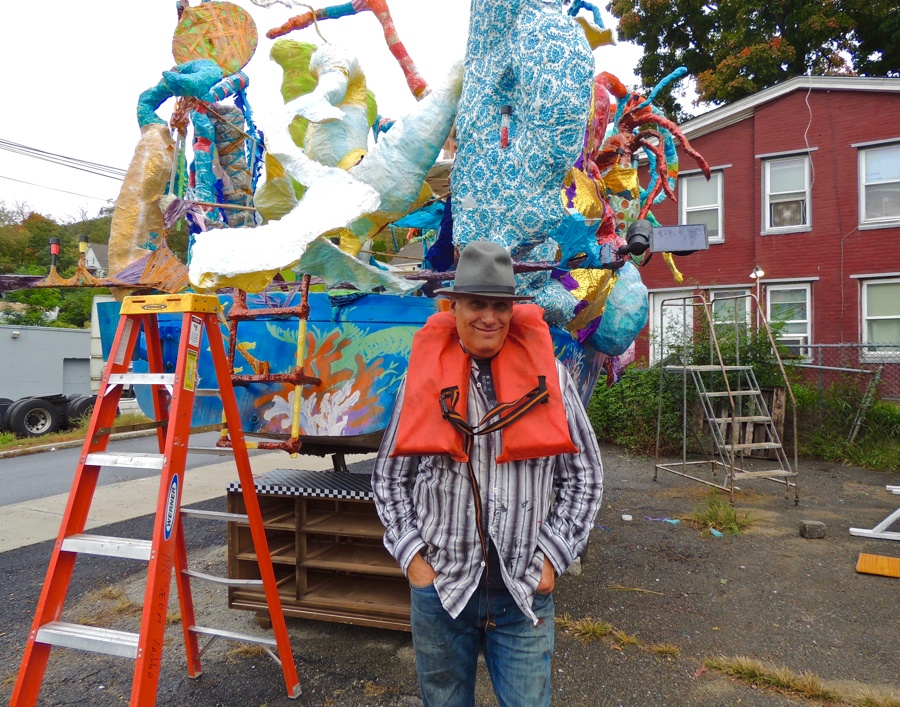 Ever the optimist, Beck sees this whole situation as a learning experience for himself and his volunteers. “I look at everything as a positive thing,” he says. “We’re gonna be able to re-think the engineering and all that stuff. Who knows what we’ll be able to come up with. A lot more people wanted to participate, so I think we’ll get even more people involved.”

The channel has hosted several floating art projects over the years, but this is the first one to require rescuing, says O’Neil, of FPAC. Only half kidding, she chalks the anomaly up to climate change. “Did we have [high] winds because of global warming?” she asks. Much of FPAC’s work in the channel has sought to shed light on climate issues—including with a giant foam iceberg last year—so she can’t help but wonder if they angered some malevolent higher power.

“[Jerry] did a really cool performance piece on Sunday about climate change,” she says. “Maybe this was the gods being mad.” 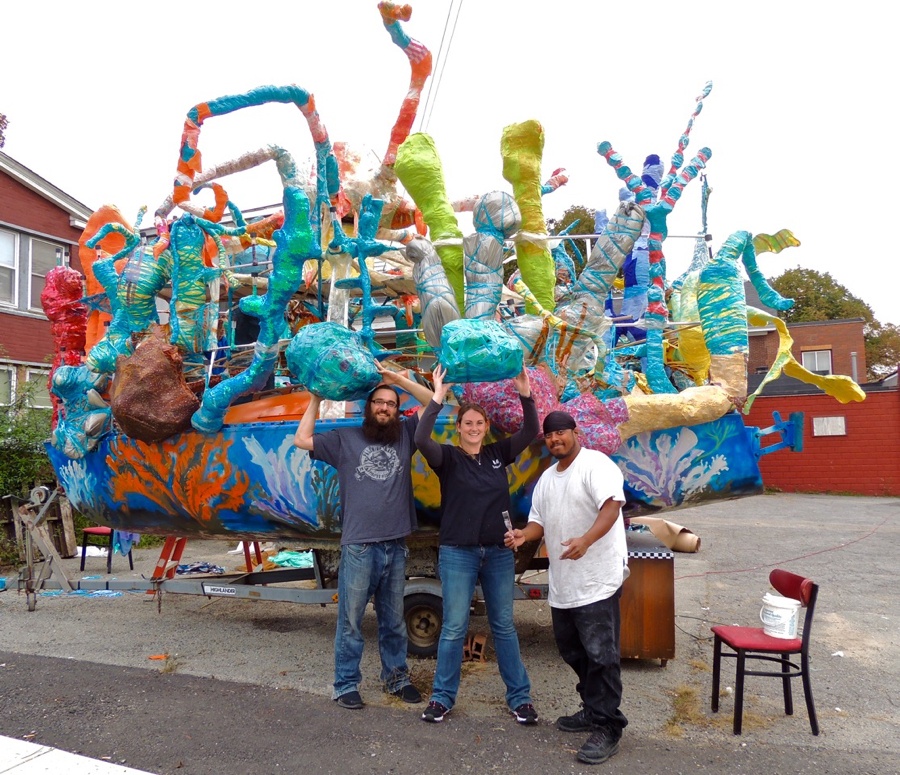 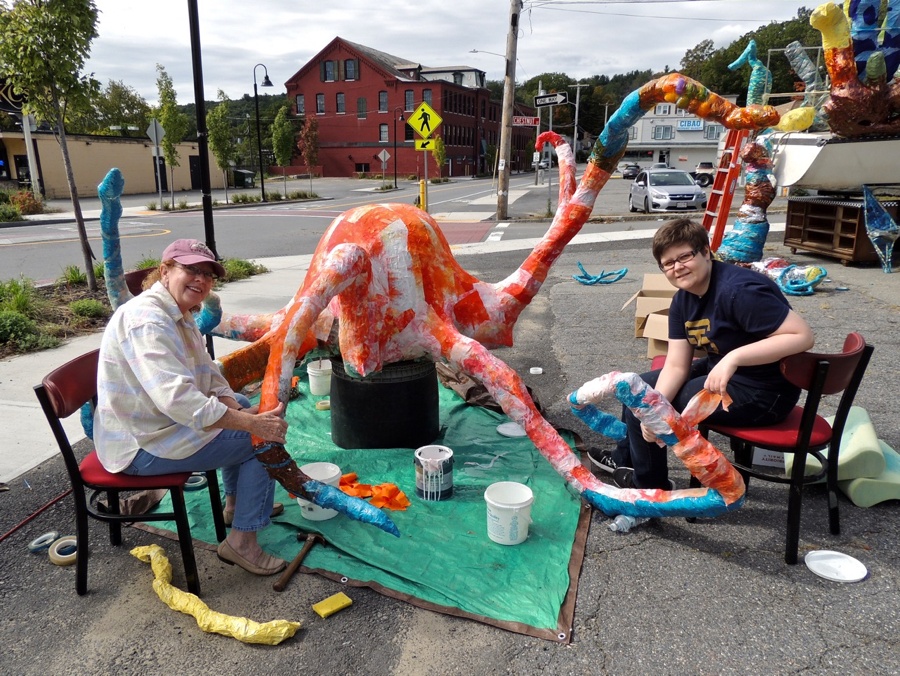