The Top 10 Worst Breakups in Boston

We've all had our hearts broken before. These are the breakups that left us sitting on the couch, crying into our ice cream. 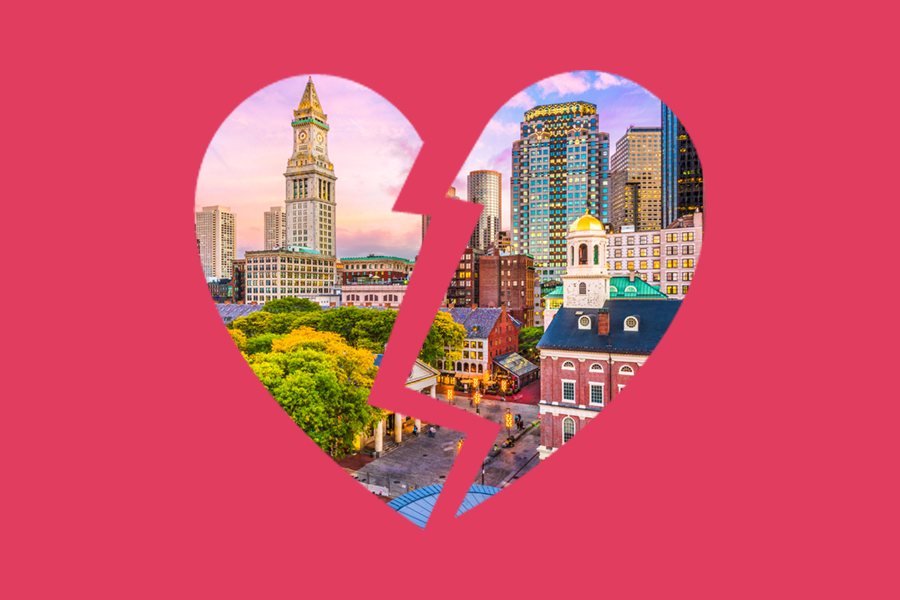 Some people are spending their Valentine’s Day curled up in front of a cozy fireplace with their sweetheart, reading sonnets or whatever romantic people do. This post is not for them. This post is for anyone who wants to dwell in the depths of Boston’s perpetual angst about anyone who ever leaves us for greener pastures. Why would anyone ever want to leave this bastion of miserable weather, aloof residents, and utterly baffling roadways? That’s what we thought. Without further ado, these are the worst breakups the city has experienced.

10. Wes Welker Leaves the Patriots for the Denver Broncos

Look, we all enjoy Julian Edelman’s on-field heroics. But Tom Brady used to have a different scrappy, slightly undersized wide receiver to toss the old perfectly inflated football to. We’re talking Wes Welker. The magnitude of Welker’s efforts with the Patriots will live on in local sports lore, but the love of devoted Pats fans was no match for Bill Belichick’s patented heartless trade maneuvering. Welker was unceremoniously shown the door in 2013, when he went to the Denver Broncos, leaving a little #83 shaped hole in our hearts as he went (let’s not talk about dropped passes right now—it’s too painful).

9. Everyone Who Goes to Berklee and then Drops Out to Get Famous Elsewhere

What is even the point of having a world-class music school in the city if all of the most famous alums drop out midway through to get famous in some other town? We’re looking at you, John Mayer, St. Vincent, Quincy Jones, Melissa Etheridge, Natalie Maines…OK, we’re cutting this list off. At least Juliana Hatfield stuck around.

After we couldn’t even be bothered to vote for him for president in 2012, is it any wonder Mitt Romney left behind Massachusetts for the more GOP-friendly wilds of Utah? We’ll always have the legacy of Romneycare, which was enacted in 2006, formed the inspiration for the ACA, and was hugely influential in the state’s best-in-the-nation insured rate, which hovers around 97.2 percent.

7. Johnny Damon Signs with the Yankees

The curse-breaking 2004 Red Sox team will live on in the hearts and minds of Boston sports fans until the city is eventually swallowed by the ocean thanks to global warming. The highs! The lows! The shaggy long hair! But all of that only made it a more bitter pill to swallow when one of the team’s finest decamped for (ugh) the Yankees shortly thereafter. Johnny, how could you?

It seemed like a slam dunk: The state’s popular attorney general running for the senate seat left vacant when Lion of the Senate, Ted Kennedy, passed away. But Martha Coakley turned out to be an unexpectedly bad campaigner, committing the unpardonable faux pas of calling Curt Schilling a Yankees player and going on vacation after the primary. The loss handed the senate seat to upstart Scott Brown, and Coakley cemented her bad luck status with a loss to Charlie Baker in the governor’s race a few years later. In her defense, Baker has proven to be one of the country’s most popular politicians, while Brown…well, he also earned himself a spot on this list. Coakley, meanwhile, has since moved into private practice, and neatly side-stepped getting involved in turmoil around Suffolk’s presidency a few years back.

Brown’s tenure as a senator from Massachusetts was, let’s face it, an odd time. His term lasted only three years, during which time he earned the honor of a Jon Hamm portrayal on SNL. But he lost the seat thanks to the freight train that was Elizabeth Warren’s political career, and rather than find a sweet university gig or pet political cause like the rest of the put-to-pasture local politicians, he…ran for senate in New Hampshire. And then, to really drive the point home, the former senator from the most Trump-hating state in the nation went to work for the Trump administration. At least Mitt Romney had the good grace to look abashed when he was considering it.

It’s leaving! It’s staying! It’s a landmark! It’s a symbol of dependence on petroleum, and unfit for our modern green city! The Citgo sign is our very own on-and-off relationship, and public opinion seems to vary widely between the poles of thinking it’s a cool retro landmark for the city, and seeing it as an obstacle to the city’s development. The sign almost made it to historic landmark status last year before Mayor Walsh put the kibosh on it, so expect to hear people arguing about it for some time to come.

3. Top Chef and Boston Are Never Ever Getting Back Together

It sounded so nice, at the beginning: A season of beloved cooking show Top Chef set in Boston, so we could show the world we were more than just lobster rolls and Fenway Park. But it ended with recriminations and a big, nasty lawsuit that resulted in an acquittal for four Teamsters who were accused of harassing host Padma Lakshmi and other staffers for the show in an effort to make them hire union workers. While the union may have won the lawsuit, the court evidence of ugly behavior did nothing for the city’s reputation. We’ll always root for any Boston chef competitors, though, and regular judge Gail Simmons still loves us—but it’s probably safe to say Lakshmi won’t be pushing to film in the Bay State any time soon.

What’s the best word for the winter of 2015? Snowpocalypse? Snowmageddon? The Bad Place? Whatever you want to call it, it was a dark, snowy time, full of record-breaking snowfall, yetis, and ongoing systemic failures of the MBTA. The aging system was no match for historic snowfall, and the situation got so bad that a map marked off with such notations as “NOPE,” “DON’T EVEN,” and “BUS” to indicate the various shutdowns went viral. Bev Scott, then the general manager of the MBTA, initially indicated she planned to stay on and fight to restore service, saying at one point that not even “God Junior” could have kept the trains running. But after one too many contentious press conferences, and presumably some very slow train rides, Scott abruptly decided she’d had enough, and bailed out of town.

1. Babe Ruth Goes to the Yankees

Hard to see this one being knocked off the list’s number one spot. Has any breakup had a longer lasting impact on this city’s psyche? The departure of the Great Bambino to New York for, famously, $100,000, left Boston (and the Red Sox) reeling for decades. It took us just 86 short years to get over this one.