See the works of the iconic Mexican modernist painter on display at the MFA. 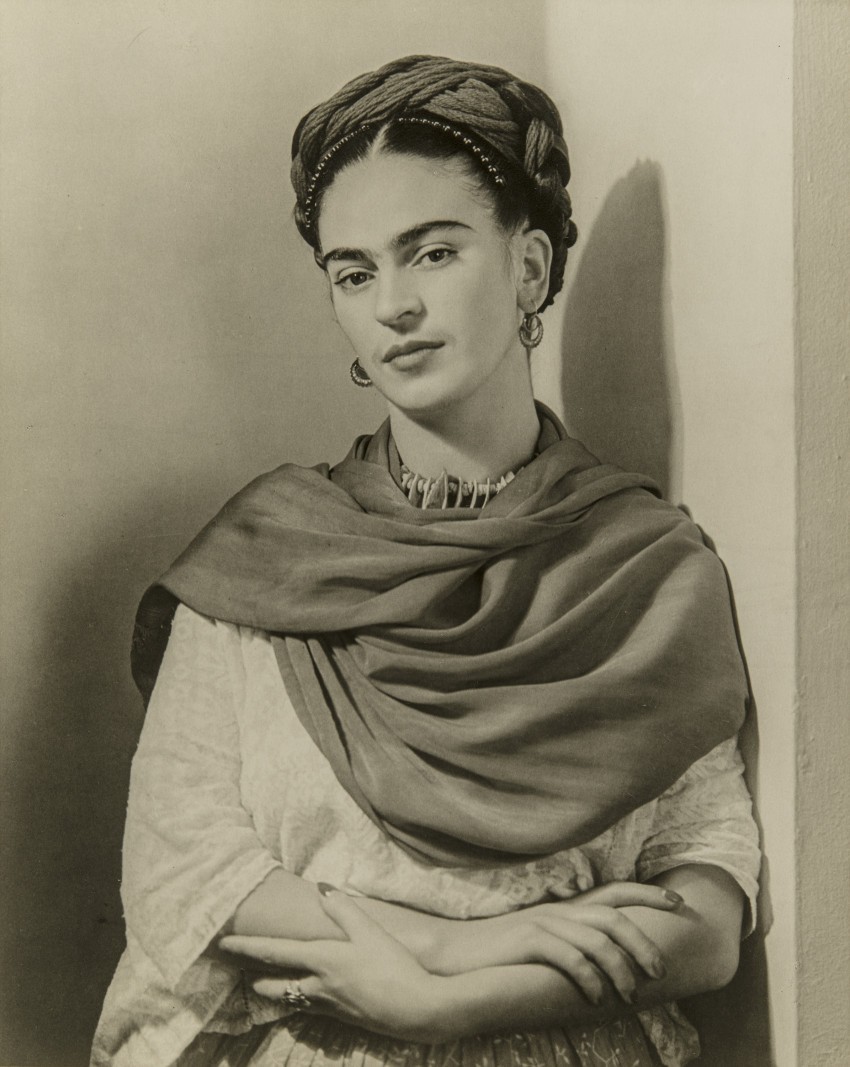 Frida Kahlo: a feminist figure, a brilliant artist, and the original icon for strong brows. Nearly 65 years after the famed artist’s death, the Museum of Fine Art will have eight of Kahlo’s paintings on display this spring in their first-ever exhibition of work from the renowned Mexican modernist in a celebration of her work and legacy. Titled Frida Kahlo and Arte Popular, the exhibit is built around the artist’s penchant for collecting Mexican folk art, or arte popular, and the ways in which these indigenous cultural pieces, and political statements, influenced her work.

“Collecting arte popular was a political act in this time,” says the exhibition’s curator, Layla Bermeo, the Kristin and Roger Servison Assistant Curator of American Paintings at the MFA. “After the Mexican Revolution, many modern artists and intellectuals collected these objects, which were made in rural and indigenous areas of Mexico, as a way to imagine a newly healed and unified country following the war. And she was very much a part of that.” 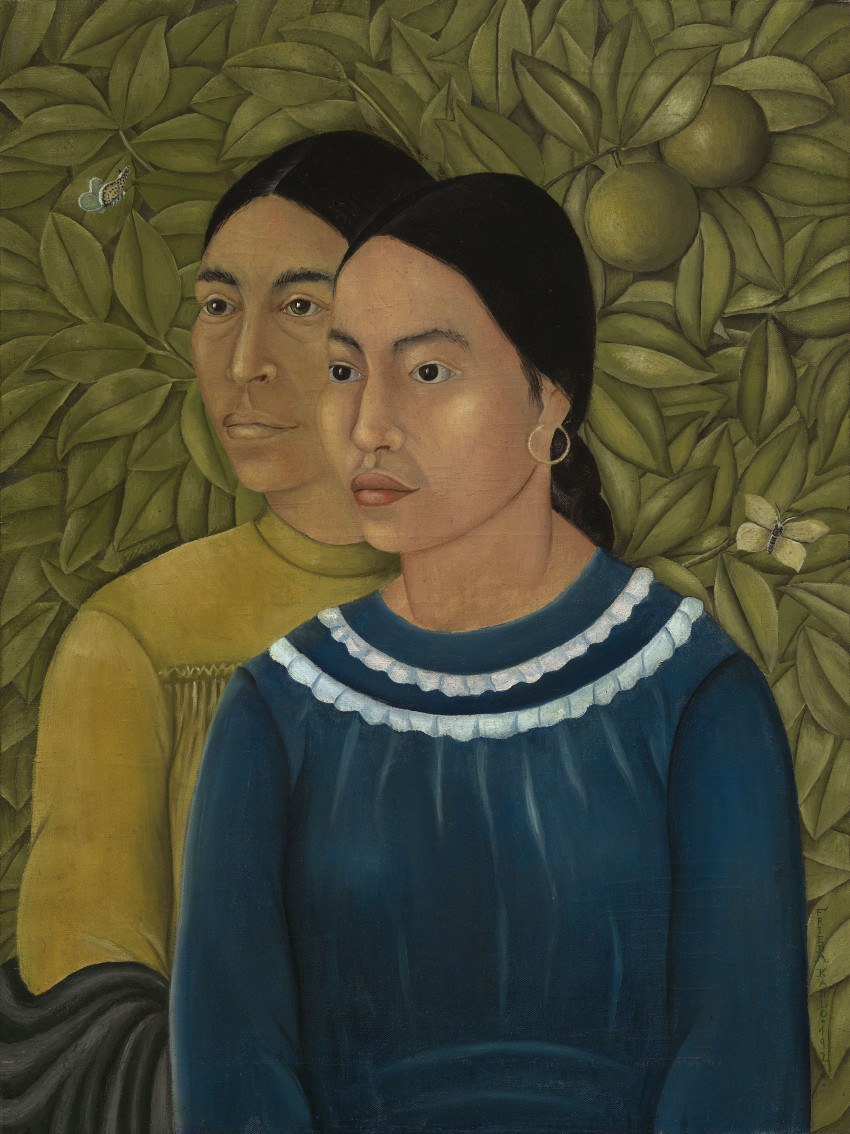 As a way of acknowledging this passion of Kahlo’s, her paintings will be displayed alongside about 40 examples of arte popular. While Kahlo’s personal collection is not on display, the pieces of arte popular featured throughout the exhibit are similar or nearly identical to the type of work she collected. Many of the pieces come from the personal collection of Nelson A. Rockefeller, which he acquired with the help of both modern and folk artists during the same time Kahlo was building her own collection. Among the works on display by Kahlo herself is her early painting “Dos Mujeres (Salvadora y Herminia),” a portrait depicting two of her mother’s maids, and the first painting sold by Kahlo. Acquired by the MFA in 2015, it is the only painting of hers in New England.

Unlike many other exhibitions or publications on Kahlo, Bermeo says the MFA will try to avoid “a purely biographical reading” of the artist’s work, shifting the focus from Kahlo’s tumultuous marriage to fellow Mexican painter Diego Rivera, her lifelong battle with illnesses and injuries, and her well-known physical appearance, to instead explore the political and cultural influences that inspired her work.

“Because we know so many things about her life now, asking very basic questions about her art seems very radical,” says Bermeo. “What inspired her? What happened to her practice over time? With this particular thesis, I like to ask, what was she learning from arte popular since she was mostly a self-taught artist?”

The exhibit is divided into five sections organized by themes. Art of the People (Arte del Pueblo) will highlight the political climate that shaped her work. Working as an artist in post-revolutionary Mexico beginning in the late 1920s, Kahlo, like many other modernist artists and intellectuals, collected arte popular from the rural and indigenous parts of Mexico as an act of national pride.

Another section is grounded in Kahlo’s engagement with the existing still life tradition, and how she revitalized the genre toward the end of her career, personifying her still lifes with qualities adopted from works of arte popular. Living Still Lifes (Naturalezas Vivas) will feature three of Kahlo’s paintings—”Still Life: Pitahayas,” “Still Life with Parrot and Fruit,” and “Weeping Coconuts.”

Estéticas de la Infancia, or Aesthetics of Childhood, is another section illuminating how Kahlo’s work reflected the broader context of the time period.

“So many modernists of the period were interested in collecting toys, depicting children, even collecting and exhibiting the art of children, and we see how Kahlo fits into this larger art historical moment,” says Bermeo. 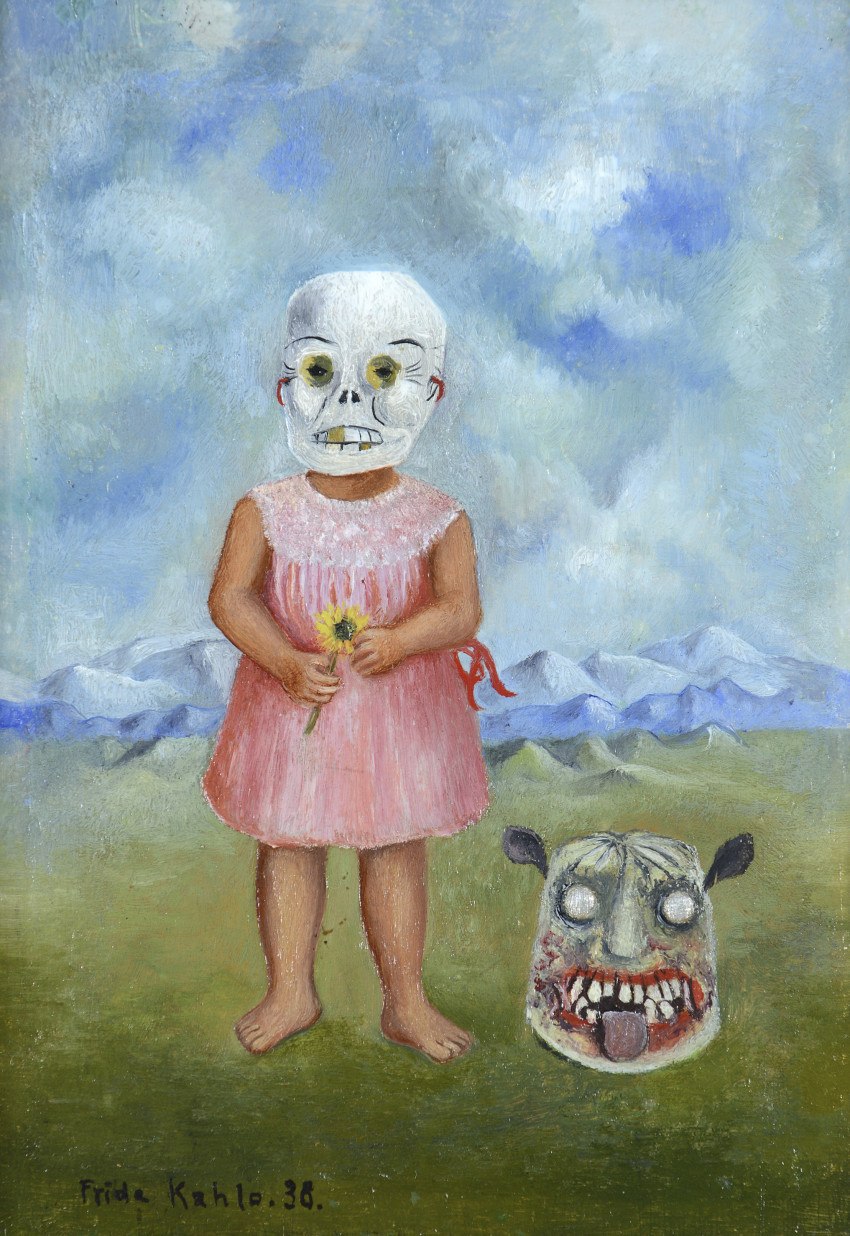 Displayed in this section is Kahlo’s “Girl with Death Mask,” a painting depicting a child, believed to be Kahlo herself, whose face is hidden behind a skeleton mask. Laying in the grass beside the child is a jaguar mask, said to symbolize strength. Connecting Kahlo’s art to her collection of arte popular, a wooden jaguar mask similar to the style Kahlo collected is also on display in the exhibit. 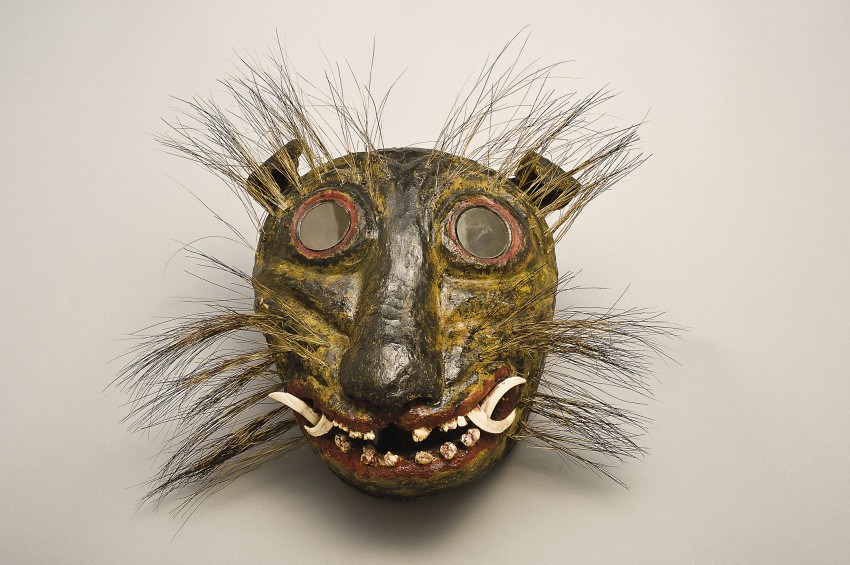 A section titled Painted Miracles (Milagros Pintados) recognizes the important influence of Kahlo’s collection of hundreds of ex-votos, or small devotional paintings on tin, which Kahlo was drawn to more for their aesthetics rather than their religious context. Unlike her contemporaries, such as Gabriel Fernández Ledesma, whose painting, “Girl,” is also on display, Kahlo did not simply incorporate ex-votos into her paintings, but rather, turned her work into ex-votos themselves.

“She painted often on metallic surfaces that were inspired by these small devotional paintings,” says Bermeo. “And so we can see here how Kahlo is engaging with this popular or vernacular form of art, but then she is also departing from it in her own work.”

Lastly, a section called Invented Traditions (Tradiciones Inventadas) examines Kahlo’s use of clothing and hairstyles to craft her own appearance, much the same way she used paint to create images on canvas. Featuring textiles and garments as pieces of arte popular, the exhibit includes a local Tehuana dress that was a signature aspect of Kahlo’s personal style. Jackson Cole Phillips, an American industrialist, friend of Kahlo’s, and the initial owner of “Dos Mujeres,” purchased the dress with Kahlo’s help. 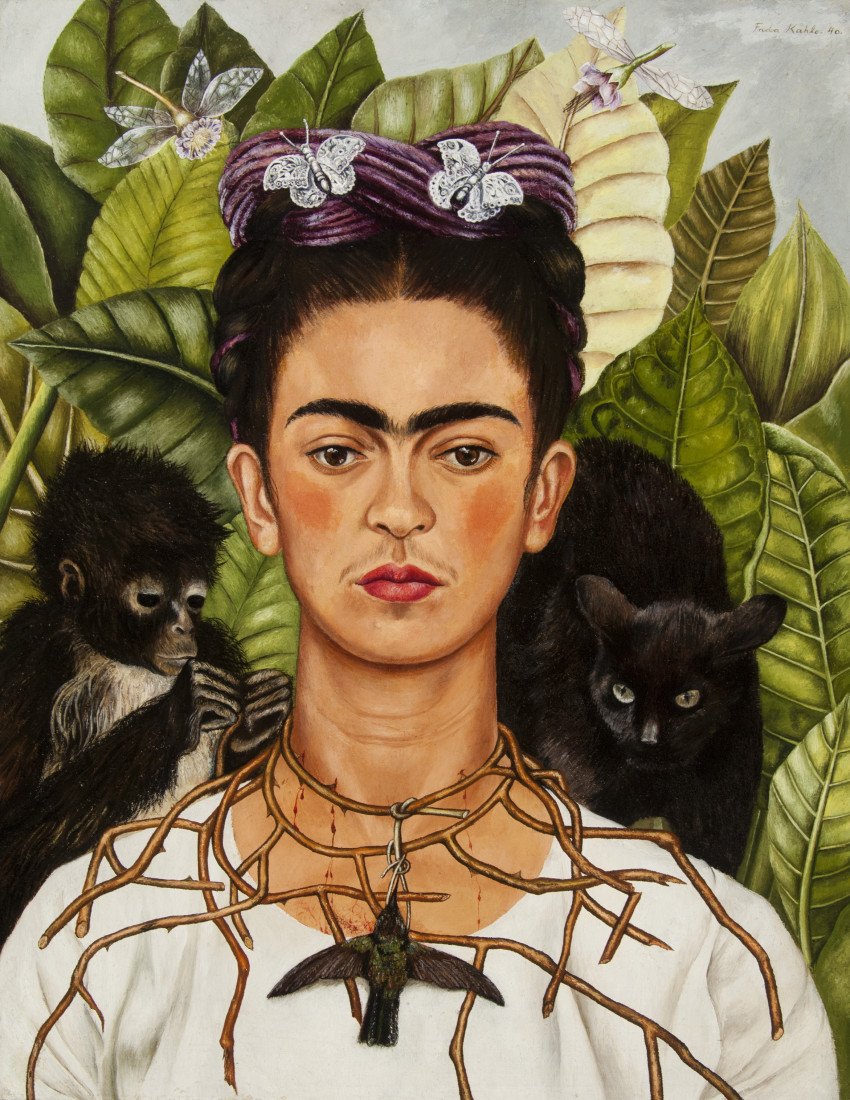 Bermeo sees Kahlo’s work as representative of the period of art history in which she lived, and “as an early way of thinking about the personal as also something that’s political,” a theme well-suited to bringing Kahlo’s work into modern-day conversation. If you’ve seen Kahlo’s unmistakable bold brows and flower crown on a women’s march sign, in a Snapchat filter, or emulated in an Oscar-nominated performance by Salma Hayek, Frida Kahlo and Arte Popular will show just what influenced and inspired this legendary, groundbreaking artist, and why her art and legacy still stands today.