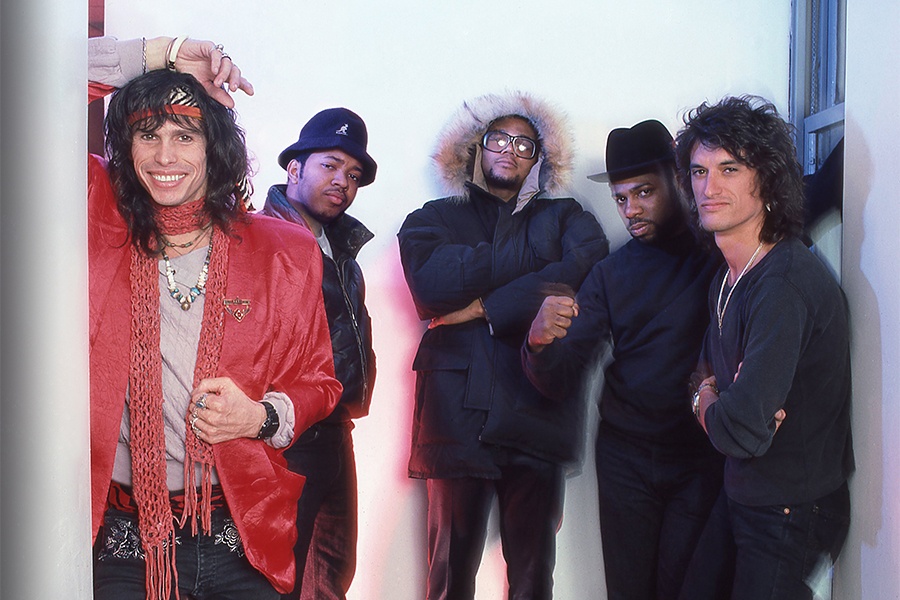 Back on Sunday, March 9, 1986, in a Manhattan recording studio, members of two completely disparate bands met and recorded a song. It wasn’t even a new song, but a cover of a classic-rock staple. The artists didn’t know each other, weren’t even sure if they liked each other. But one band was Run-DMC, the already popular hip-hop trio with a career on the upswing, while the other two musicians, Steven Tyler and Joe Perry, represented Aerosmith, once arena-filling rock stars, now floundering after years of drugs and dissension.

And yet the results of this day would ripple out in pop culture history for decades, which is why this hip hop–rock musical hybrid forms the entire basis behind Geoff Edgers’s new book, out this month, called Walk This Way: Run-DMC, Aerosmith, and the Song that Changed American Music Forever.

“The title is not hyperbole,” says Edgers, a longtime Boston Globe reporter and now the national arts reporter for the Washington Post, even though he still lives in Concord. “It may be dramatic, but it’s actually true. ‘Walk This Way’ became the first hip hop song played on mainstream rock radio—in fact, WBCN here in Boston played it first. MTV followed, and then what happened immediately afterwards was that you had Yo! MTV Raps, The Fresh Prince, In Living Color. Only then did hip-hop become insinuated in mainstream culture.”

Anyone who grew up in the 1980s can recall the video in their head: Run, DMC, and Jam Master Jay rapping out Tyler’s lyrics in one rehearsal space, while Tyler and Perry play one of their most famous songs on the other side of a wall. Tyler smashes down the wall with a microphone stand, the two groups join together on stage, and soon the Bad Boys of Boston with their flowing locks and many scarves are jamming with the pride of Hollis, Queens, clad in their trademark Kangol fedoras and unlaced Adidas. But as Edgers describes in his book, the two bands had nothing in common and their histories were entirely separate, which is why he relates their histories in parallel chapters until they converge on the recording session.

In fact, Run-DMC didn’t know the song, but only the drum breakbeat featured in the first 45 seconds, which they would repeat and rap over at clubs and parties. The symbolism of the collaboration and the walls being demolished in the video may be none too subtle, but was crucial in an era of pop culture when white and black radio never overlapped and MTV only grudgingly played Michael Jackson videos. As history would bear out—just turn on your radio now or open any magazine today—the moment turned out to be bigger than both bands.

To tell how these two very different groups converged both personally and musically, Edgers did the yeoman reporter’s work of reaching out and talking to all the major players. That often meant repeated phone calls and emails, as well as ample patience, but the result is a book that is both fresh with new insights and deep perspective from the main players, including Run, DMC, Russell Simmons, producer Rick Rubin, and all the members of Aerosmith.

“I have a pet peeve with stories written about historic moments that don’t try to reach the people who are alive,” Edgers says. “We see it in oral and cultural histories all the time, where there are hard-to-reach famous people or people who have disappeared. But people’s perspectives change, so that history becomes more mythology than history.”

In one case, Edgers had interviewed Viacom executive Doug Herzog, who hooked him up with 20 minutes of unseen footage shot by MTV of Run-DMC and Aerosmith in the studio. Once he showed the footage to Run himself at his New Jersey mansion, all sorts of memories flooded back for the rap legend about that fateful day, which ended up in the book.

Over its brisk 260 pages, the reader gets a whirlwind history of the birth of these hiphop heroes and the platinum-selling rebirth of these classic-rock titans—both are now in the Rock & Roll Hall of Fame, thanks in part to the very song celebrated in this book. For a guy raised in Brookline, who remembers seeing Aerosmith on its 1984 Back in the Saddle Tour as well as listening to Run-DMC’s King of Rock in his friend Tommy’s basement, the story is a dream of a lifetime of music fandom focused on one dynamic point.

“I love the idea of taking one thing that’s important and really explaining everything you can about it, even it’s just one song,” says Edgers. “It’s also about everything else, and the good and bad of success. I could have spent about 200 more pages on it.”

See Edgers in person at the Varis Lecture Hall at Tufts on Wednesday, February 27, 12 p.m. See tufts.edu for more details.