The singer discusses the challenging themes on her new album and how she pranks husband Neil Gaiman's fans. 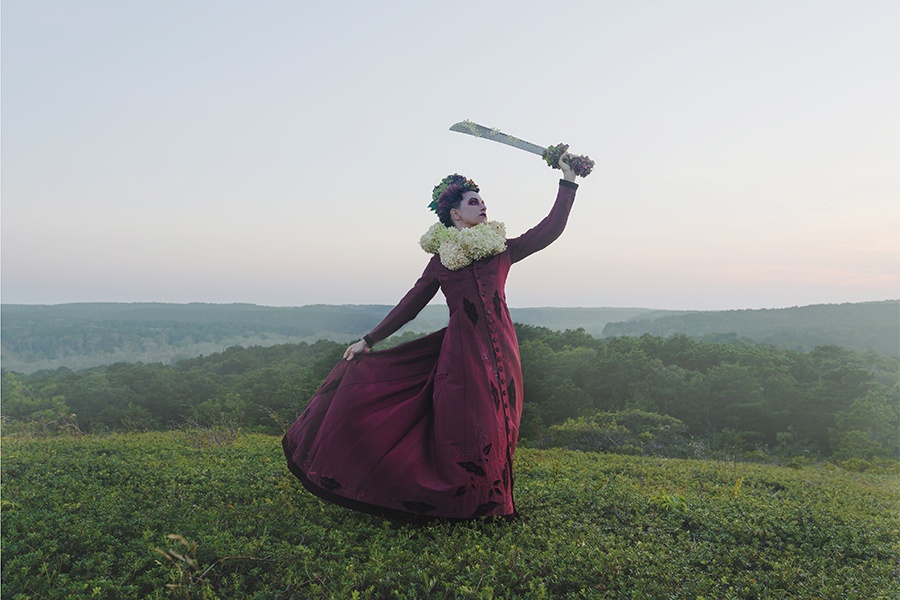 Photo by Kahn and Selesnick

Lexington native Amanda Palmer first made waves in Boston as one half of the art punk band the Dresden Dolls, though canny citizens may have spotted her street performance as the eight foot bride in Harvard Square. More recently, she’s been an advocate for creative music distribution methods, ditching her record label to start a record-breaking fundraising campaign on Kickstarter for a solo album before settling in with her fans at the monthly subscription service Patreon. We caught up with Palmer to discuss her newest solo album, the spare, melancholy There Will Be No Intermission, how she and husband Neil Gaiman balance their thriving careers, and why Boston audiences just can’t get down at concerts. You can hear the new album live when Palmer performs at the Orpheum on April 19.

You went for a much more stripped down style on There Will Be No Intermission, and you’re touring with just the piano—why did you decide to go that route this time?

This is the first time in my career that I’m doing a global tour completely alone. It isn’t coincidental given the content of the record. This is the most stripped down, vulnerable, intimate, honest record I’ve ever written. The production of the record itself doesn’t want any heavy-duty production. My producer and I sat down and we made a very strict set of rules: no band, no strings, no orchestra, no excess ornamentation. Just the sounds and the truth of the songs. So there’s a teeny little bit of over-dubbing on the record, but it’s very, very spare and I wanted the tour to reflect that.

What kinds of subject matter are you covering?

A lot of the themes on the record are about being alone and facing the slings and arrows of existence. I write about abortion, I write about motherhood, I write about miscarriage. It’s not an easy record. But I’m really looking forward to this tour. There’s something very healing about it, especially the idea of sitting alone, on the stage of the Orpheum in Boston and telling these stories of my life. It feels like a weight is going to lift every time I do this show, especially in every place where I have history.

Did you have any hesitation about spending so much time on such dark topics, between the writing, the recording, and now the tour?

Not really. I’ve been writing about the dark since I was 12 years old. I think there’s a real difference between living in the dark and living in the art dark. Living in the art dark is much more of a creative, healing, therapeutic state, even if you’re holding the hand of those subjects, of cancer, death, abortion, miscarriage or pain. I think, as a culture, one of the reasons we suffer so much is because we don’t sit with the dark. We don’t understand how necessary it is to befriend the dark. I’m looking forward to doing this because I see firsthand when I play these shows how incredibly medicinal it is for my community and the people in the audience. It doesn’t feel like a self-centered sad fest. It feels more like a holy place of darkness that we all enter and we come out a lot lighter. The show, the album—none of it feels morose to me. It actually feels very joyful.

And that being said, I also have a three-year-old child, so the way I routed my tour, I’m not getting on a tour bus and playing 6 shows a week the way I did in the heyday of the Dresden Dolls. I’m flying to two or three cities a week, and then I’m coming home. I’m living this Jekyll and Hyde existence where I’ll be going from a theater of 3000 people into my little kitchen and packing sandwiches to take my kid to preschool. And I’m actually really looking forward to that. I’m gonna spend 3 days in the dark with thousands of people, and then I’m gonna be shopping at the market for squash and a new toothbrush.

Given all the institutional problems—the skyrocketing rents, the lack of arts funding, etc—would you still recommend a new artist get started in Boston?

Oh, I can’t answer that question. Anyone who really wants to be an artist is going to find a way to do it, whether they live in Boston, Hong Kong, or Siberia. That kind of question is the kind of question that should an artist ask it, the answer is probably no. If the question is, should I be an artist, should I really try to do this, should I really try to do this here, you know, there’s always a path forward if you’re determined enough. Any young musician or young artist living in Boston is gonna have leverage over an artist who’s living in rural Montana. But, there’s also the internet. The internet has flattened the playing field, and it really depends what kind of art you make. You could live in that small town in Montana, but if there’s three really great indie-rock venues within five hours driving distance and you can play that circuit of towns and community who really love what you do, maybe you do have an advantage over someone who is living in Boston but can’t get a gig at the Lizard Lounge. It’s all relative, but it’s doable anywhere. It’s doable anywhere if you have talent and ambition.

Any recommendations for what they should be teaching at Berklee?

Everyone at Berklee should drop out and go perform in the streets.

What do you miss most about old school Boston?

The Once ballroom. I love J.J. [Gonson] and what she’s created there with Cuisine en Locale and Once. That’s been one of my happy places in Boston when I’m home.

Do you think Boston is still weird?

Boston was always fuckin’ weird but maybe not in the way it used to be. Boston, to me, always has an uphill battle with transience. And on top of the difficult stratification of academia. My prayer for Boston is always that it can find its way to being a little friendlier.

Stop being such aloof New Englanders?

Yea, just fuckin’ quit it, dude. Seriously, just smile at someone. It costs you nothing.

I still deeply love the Lizard Lounge, which gave birth to the Dresden Dolls. We did our first residency there. I love going down the staircase into a hidey hole venue. And I love the vibe at the Once Ballroom, too. Everyone there is just so incredibly local and friendly.

They’re more insecure and suspicious than your average city. [laughs]

You used to perform as the eight foot bride in Harvard Square. Is that still the place to do that, or would you recommend someone busk somewhere else if they want to try to do some kind of funky performance art?

Harvard Square was really good for me because I had a fantastic connection at Toscanini’s, where I could leave all of my stuff. For the sort of life I wanted, which was a quiet, emotionally driven-street performance life, my little corner of Harvard Square was really the perfect size and scale for me. But I probably would have made a lot more money working at Downtown Crossing. I just couldn’t handle the vibe.

It’s a much bigger crowd there than Harvard.

Yeah, but I would have gotten yelled at a lot more.

So was Toscanini’s the best place to work while you were launching your career?

It was pretty fantastic. Gus Rancatore of Toscanini’s is a saintly patron of the arts and ice cream. He is just such an amazing man.

Burnt caramel. Also, there’s a flavor called Cake Batter, which was pretty incredible, too. And the coconut sorbet is to die for, especially if you add it to tea in the winter. As a Toscanini’s employee we learned to combine every possible beverage with every possible ice cream because that was what we ate.

We definitely tend to get recognized as a couple a little more, because if anyone is confused about whether that was Neil or whether that was me, they can sort of use the other half of the couple to corroborate their suspicions.

When someone does approach, can you tell from the jump whether they’re going to be a Neil or an Amanda fan?

That does makes sense.

It’s funny—I have a much better “fandar” than Neil does. I can tell if someone 50 feet away is coming towards me or him, and Neil is a little more in his clueless author bubble. What I have noted, although Neil may disagree with it, is my fans tend to be slightly less on the spectrum than his fans. And so I will always make a point of helping his more helpless fans navigate the fact that there’s a girl standing next to Neil Gaiman, who they should introduce themselves to, and then sometimes if I’m in a really mean mood I’ll introduce myself as Neil’s personal psychic, if they don’t know who I am.

Is it hard for you guys to balance when you both have some kind of project getting released at the same time?

Yeah, I mean, if you want the honest answer, Neil is two months late getting home right now, and it’s greatly compromising my ability to promote my record. But I also know that the TV edits going two months over and trapping him in London is way out of his control, and I’m just trying to deal with it gracefully. It’s really hard to feel like I have to put my career second to my husband’s, but I also know that he’s keeping track of my sacrifices, and when he is called upon next year to take the kid for two weeks because I’m all of a sudden called over to do last minute promo in Australia, he’ll be happily holding the bag. It’s just a matter of plan and scale. Also, we’ve both come to understand that while we’ve recently spent our lives making our work, our own personal unique work, our top priority—Neil’s work has been his top priority, my work has been mine—we now have a top priority that trumps everything, which is our child. In a weird way, that lessens the pain, because taking care of my child right now instead of working on my record doesn’t feel like that much of a sacrifice. It’s my child. It’s not that hard.

What sets your Dresden Dolls bandmate Brian Viglione apart as a musical collaborator?

I have played with hundreds of musicians at this point, and I have never found someone who speaks my musical language as fluently as Brian, to be honest. It was just somehow written in the stars. He and I have a psychic music soul connection that I have not found easy to replicate.

Will you ever have another full length album with the band?

Yeah, I do. I’m not gonna say anything else about that, but yeah.