Happy Place, the Immersive Instagram Sensation, Is Coming to Boston in April

It offers a dozen rooms of social media-friendly bliss. Just don't call it a "selfie factory." 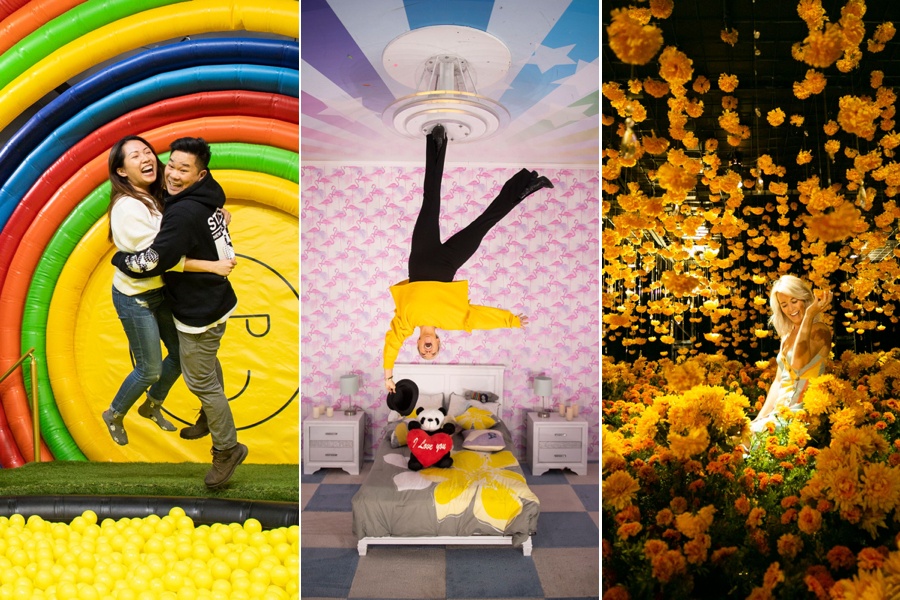 Update May 15, 2019: Happy Place has just announced it’s adding four weeks to its run on Boylston Street, and now plans to remain open through June 30.

These days, more or less everything you consume—the cocktail you drink, the wedding you plan, the box you unbox—is optimized for Instagram. Heading on a hike soon? The ‘Gram-ability of the summit is more important to adventurers than ever. Even Boston’s bathrooms have had to step their game up to compete for social media love.

There’s no sense in fighting it. So Happy Place, the internet-fueled attraction making its way around the U.S. and Canada, doesn’t. In fact, it’s been hailed as “the most Instagrammable pop-up in America,” and embraces that reputation.

Next month, you can embrace it, too, when Happy Place lands on 500 Boylston St. in Boston for two months, beginning April 5. Tickets, which will run you $30 a pop, go on sale on Friday.

Taking over a 13,000 square foot space that once housed a Marshall’s, Happy Place is made up of 12 brightly lit rooms, each one filled with unusual (and, again, extremely shareable) attractions, like a giant ball pit shaped like a pot of gold you can jump in, a yellow tub surrounded by hundreds of rubber ducks, or a bedroom designed to look like it’s been turned upside down.

That one time @rashidajones was hanging from our ceiling. #almayreveal @almay

We see you @poshope and agree… the inner Cookie Monster in all of us is awake! Thanks for using #WeAreHappyPlace

“I want people to do something at Happy Place they’ve probably never done before, like walk into a room that smells like cookies and looks like cookies,” says founder Jared Paul, an entertainment industry veteran who also manages the Boston-born New Kids on the Block. “Maybe they walk out the back door of Happy Place with maybe a little more joy in their heart.”

Case in point: The Confetti Dome, a giant transparent sphere filled with shards of colorful paper that, at the touch of a button, whirl in the air. “For a minute it’s like Times Square at New Years,” says Paul. Visitors are encourage to make “confetti angels” on the floor.

So every moment can be documented, the place has also been equipped with no fewer than 400 pieces of professional lighting equipment. Happy Place would like you to know that plenty of celebs have already stopped by during its sold-out stints in L.A., Chicago, and Toronto, among them Kourtney Kardashian, Hillary Duff, Rashida Jones, and Kerry Washington—each of them perfectly posed and impeccably lit.

Just don’t dismiss it as a “selfie factory,” the term Wired used to describe the latest generation of venues designed by and for a generation hopelessly addicted to likes and favs.

“I take offense when people call it, like, a selfie factory, because I don’t think that’s what it is in the slightest,” Paul says. “It’s immersive. There’s a lot of things you get to do and play and interact with. There’s lots of multi-sensory experiences and it’s really larger than life. I do believe that if you had absolutely no interest in taking a photo in Happy Place you would be able to have an amazing experience there.” After all, you can’t send your friends the piped-in scent of baked goods, and can a panoramic pic from a room stuffed with 40,000 fake flowers actually compare to being there? Even if we’re obsessed with impressing the masses on our smartphones, we can still appreciate new—even borderline nuts—experiences IRL, for their own sake. Right?

We stopped by to see it ourselves with our two intrepid interns, Lexa Krajewski and Mary Meisenzahl. Here’s what we found.