A star-studded extension of Kimmel's feud with Damon. 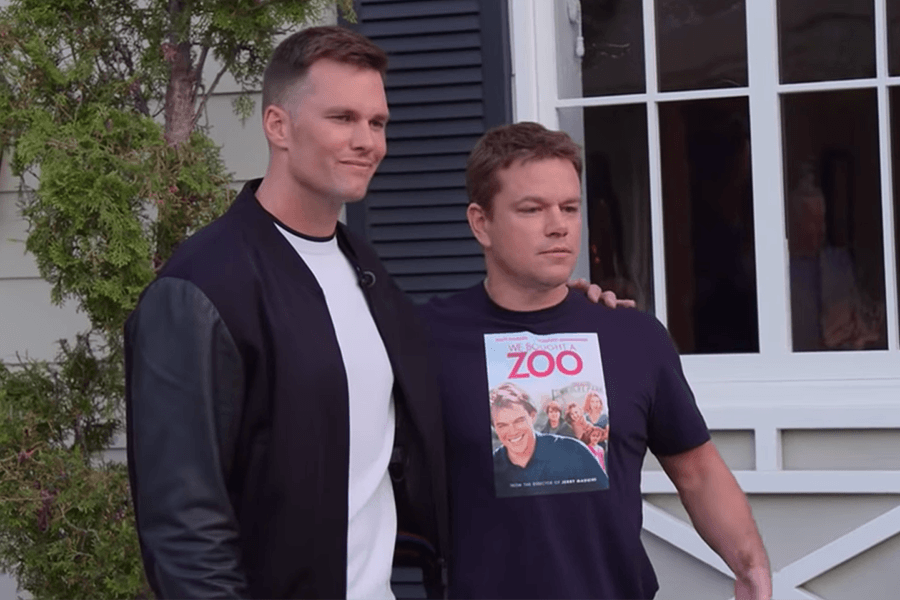 It really is the off-season: Gronk is acting, Edelman is catching games at Fenway. And Tom Brady went off the rails and stayed up past his 8:30 bedtime.

The quarterback flew all the way to Los Angeles to help Jimmy Kimmel out with his long-standing feud with Matt Damon.

“I really didn’t want to get in the middle of this…” he wrote on Instagram. But as you might have guessed, that’s exactly where he ended up.

Kimmel dragged his sidekick, Guillermo, and Brady into a taxi outside the studio after determining that it wasn’t safe to throw a pass in there. Kimmel fed an address to the driver (223 Liberace Lane, clearly a reference to Damon’s role in 2013’s Behind the Candelabra), and the trio enjoyed a nice snug ride in the backseat to this very specific address.

Once they pulled up to a normal-looking home, Kimmel challenged his guest to throw a ball through a second-floor window.

Brady of course obliged, sending a beautiful spiral straight through the window—which turned out to be one of Damon’s kid’s bedroom windows. What would Gisele say, Tom?

Damon, who has an ongoing public feud with Kimmel, came out of his house livid and unsurprised to see his rival. But he graciously took a break from berating Kimmel to introduce himself to Brady.

“We Bought a Zoo!” Brady exclaims, pointing to Damon’s shirt, which is conveniently printed with the poster of what is definitely his most well-known film.

Damon is apparently a huge Brady fan, even all the way out there on Liberace Lane, Los Angeles. Sadly, his attempt to grab a photo with his idol is foiled by his archenemy, who throws Damon’s surprisingly unicorn-adorned phone, Brady-style, through a different window.

Kimmel and his partners in crime don’t stick around long enough to see Damon bring out his Brady dolls, the life-sized “Big Tom” dummy and the pocket-sized “Little Tom.” Thankfully, they probably caught a glimpse when their taxi backtracked to knock down Damon’s mailbox before speeding off.

Before embarking on their revenge plot, Brady and Kimmel chatted about his new book, The TB12 Method, and how it can be helpful even for someone who isn’t still playing in the NFL at age 41. Kimmel also asked the Pats star why he isn’t the highest paid player in the league.

“For me in my life, winning has always been the priority,” Brady said. “And my wife makes a lot of money.”