The Six Female Emcees in Boston Everyone Should Be Listening To

With Boston's hip hop scene thriving, here are the women who should be part of your playlists. 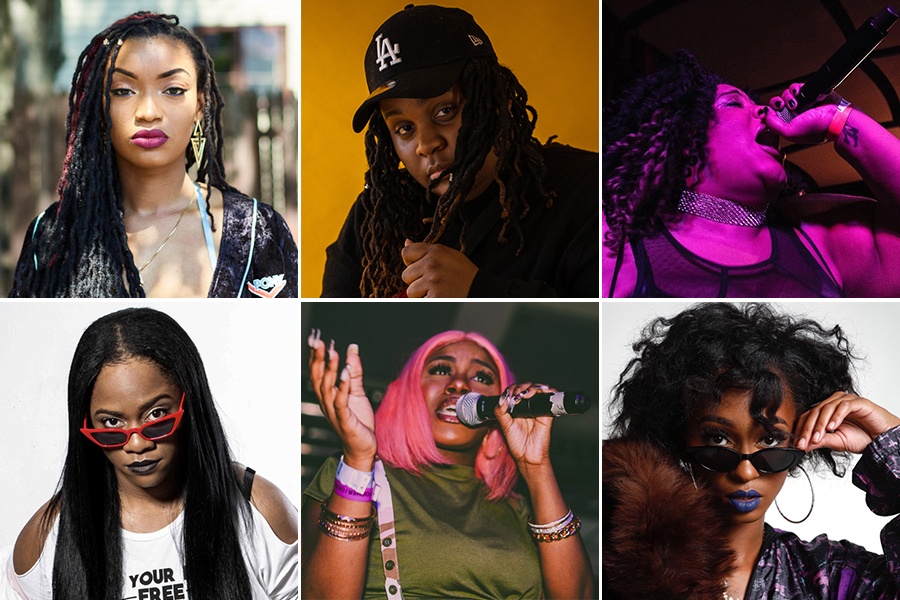 Boston’s hip hop scene has always been bustling with massive amounts of talent, and last year’s Boston Music Awards reflected its overdue recognition. Cousin Stizz became the first rapper ever to take home Artist of the Year, while acts like STL GLD and Latrell James won in cross-genre categories including Live Artist of the Year and Song of the Year.

As the city continues to finally give hip-hop its due, female emcees are also making impressive moves—and music—to carve out a name for themselves. These ladies are not only raising the stakes when it comes to possessing endless amounts of artistry, but their hustle remains unmatched. Below are the top six women in Boston hip-hop that you should be listening to—like right now.

Boston’s Best Music Artist of 2018 continues to dominate the city the best way she knows how: with brilliant bars, spectacular live shows and a compelling creative vision. Her sophomore album, last year’s Bang Bang, showcased Dutch’s evolution not just lyrically but sonically. She can still easily go round for round with your favorite rapper, but chose to experiment with singing and lean heavier on trap (“Fitted Down”) and reggae (“Elembo”) soundscapes for her latest project. The result? An ambitious and wholehearted listening experience.

This Boston-born rapper, poet, and educator prides herself on having a multi-faceted nature and innate vulnerability. Oompa is a progressive artist who crafted a self-consciously cinematic statement with her 2016 debut album, November 3rd. Her raps are filled with cascades of syllables and Oompa uses every word to share her struggles (“Catch 22”) and lessons (“The Light”). Her Unsigned Artist of the Year win at last year’s Boston Music Awards means only one thing: Oompa has no intentions of slowing down.

The thrilling dynamics of Brandie Blaze certainly aren’t for the faint of heart. Her unadulterated realness, combined with her proclivity for catchy choruses and hyperbolic persona, makes Brandie one of the most riveting local artists in the game. She made opening for STL GLD’s sold-out album release party at the Oberon back in February look like light work and continues to captivate audiences with bold trap feminist anthems ( “B.LA.Z.E.”) and unapologetic kiss-offs (“Sorry Not Sorry”).

The sultry appeal of Red Shaydez’s The Chillin’ In The Shade EP perfectly encapsulates the emcee’s alluring complexities. The usually optimistic artist is battling weariness on “Friendly” and her own existentialist crisis as evidenced by “My Conscience (My Own Worst Enemy).” She does, however, sneak in bits of joy (“You Like It, I Love It”). “Self-Care ’18” is a seemingly universal song in which Red Shaydez prioritizes her own personal needs and desires over everything else—and reminds us that once and a while, it’s perfectly OK to be a little selfish.

Cakeswagg’s pop culture precociousness is what playfully sets her apart from her rap contemporaries. Her freestyles have ranged from rapping over Jeopardy, The Fresh Prince of Bel-Air, and Law & Order theme songs to remixing that infamous iPhone ringtone. Cakeology, Vol. 1 was released last year and contains enough braggadocio to fuel her loyal fanbase. Cakeswagg’s appearance at SXSW in March garnered the performer a lot of local love; her ability to constantly think outside the box will help keep it.

This enormously gifted lyricist turned heads with last year’s Made U Look EP. Despite doubling as both a model and rapper, Malia is a nascent storyteller who relishes in the power of her own femininity. Malia Mondays, the clever moniker for her regularly uploaded Instagram freestyles, capture the layers of her raw and unfiltered talent over classic hip hop beats. Her motivation is aspirational; not only is she about accumulating wealth (“Check”) but she plans to take the women who have been in her corner since day one (“Kate MoSS”) along for the ride.