Has Boston Become a Hip-Hop Town?

Rap music is taking over, even in the halls of the MFA. Does that mean we’re not a rock city anymore? 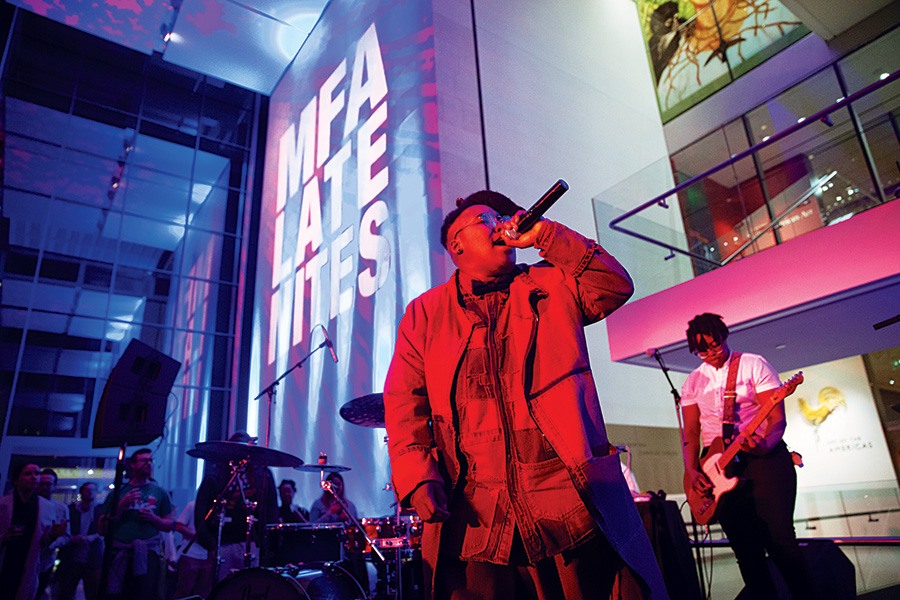 Ask almost anyone, and they’ll tell you Boston is a rock ’n’ roll town. Just look at our history. The city has birthed legends ranging from the eponymous classic-rock group Boston to proto-punks the Modern Lovers to alt-rock darlings the Pixies and the Lemonheads, not to mention the most famous hometown rockers of them all, Aerosmith. Except lately, it seems like the city is moving to a different beat. Suddenly, all of the Boston acts rising onto the national stage are hip-hop artists. This ascendance is so palpable that even some of our oldest cultural institutions, including the Isabella Stewart Gardner Museum and the Museum of Fine Arts, are getting in on the buzz the scene has created. But does that mean hip-hop is becoming Boston’s newest fine art?

This shift didn’t happen overnight. Despite being overlooked and underappreciated, hip-hop talent in Boston has been maturing organically for years, nurtured by devoted local followings; a few artists all hitting it big around the same time has given the sense that the castle has been stormed. Take Cousin Stizz, our latest export to land in the national limelight, who last December also became the first hip-hop act to win Artist of the Year at the Boston Music Awards. In fact, the whole 2018 BMA party felt like a righteous coronation for the hip-hop scene, with six of the 10 Artist of the Year nominees coming from its ranks and hip-hop group STL GLD, Latrell James, Joyner Lucas, Oompa, and Cliff Notez all winning in key categories. “Look at the Billboard charts,” says Shea Rose, a local musician who blends rap, rock, and soul, “and you know at some point it’s undeniable that you have to embrace hip-hop.”

If you’re seeking more proof that hip-hop has finally gone mainstream here, look no further than the city’s most august cultural institutions—from the MFA and the American Repertory Theater to the Gardner Museum—which are slowly replacing timeworn string quartets with livelier local acts. In January, for instance, the MFA’s Art of the Americas Wing hosted STL GLD for the museum’s first-ever listening party and the unveiling of the group’s new LP, The New Normal. So far, the MFA has also booked a dozen hip-hop performers for its Late Nites series, including March’s Hip Hop and Haute Couture event. The Gardner, meanwhile, has hosted 15 hip-hop acts through its Rise concert series, and even the Museum of Science planetarium has slotted hip-hop music between its Pink Floyd laser-light spectaculars and NASA films.

This newfound arrangement benefits both sides. The museums have found a way to stay fresh and bring in younger crowds, and rappers are getting more paying gigs in front of new audiences. Even better, thanks to museums creating programming teams with more artists—not to mention people of color—who understand the importance of presenting art uncompromised, performers tend to be the ones driving the agenda. It’s certainly happening at the Gardner thanks to visiting curator of performing arts Helga Davis. “At the Gardner,” Oompa says, “I asked Helga what she wanted me to do, and she said, ‘That’s up to you. We appreciate your work and your experiences, so just use what you know.’”

Does that mean Boston rock has officially been kicked to the curb? Well, not quite. Like many, Moe Pope of STL GLD thinks hip-hop still doesn’t garner the respect that rock ’n’ roll continues to get here. At the same time, Pope likes what he sees from Boston’s largest cultural institutions and is glad they’re finally coming onboard. “It has to start somewhere,” he says, “and I thoroughly understand that. So, I can’t thank the MFA more.”