This September, Attend a Private Concert in a Shipping Container

The free, ultra-personal "Concert for One" comes to the Greenway and Harvard Square this fall. 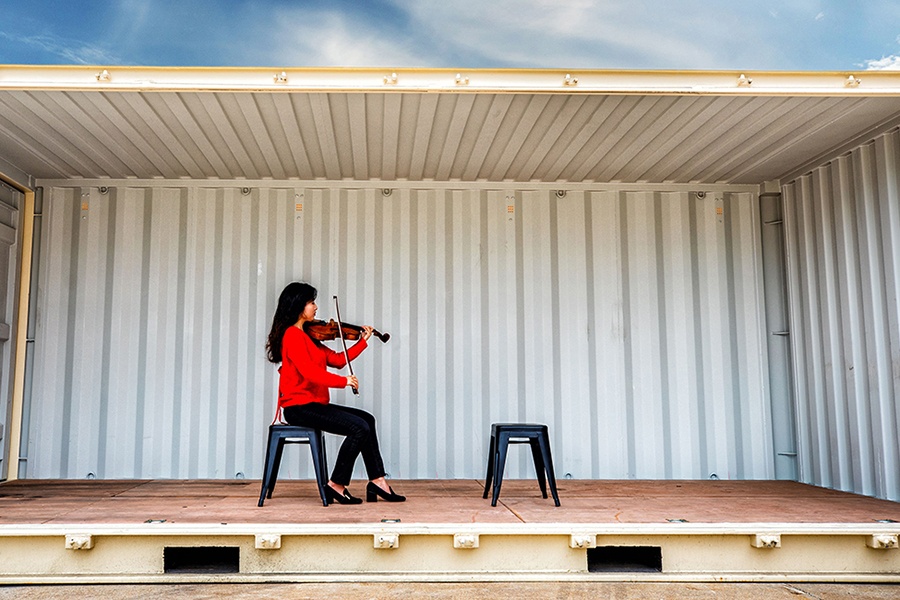 Whether you’re squinting to see your favorite artist’s tiny body from the nosebleeds in the Garden, or straining to hear the Boston Pops over the sounds of your seatmates’ cell phone vibrations and crinkling candy wrappers, it’s easy for a concert to feel…well, a little less than intimate.

As a performer, NEC graduate and violist Rayna Yun Chou is very familiar with this disconnect between audiences and performers. In response, she dreamed up a project that was equal parts concert, art installation, and social experiment—the production of a series of brief one-on-one musical performances. She staged it in her home country, Taiwan, and called it “One Minute of Us.”

Now, local nonprofit Celebrity Series of Boston is gearing up to debut a local version of Chou’s idea this September. The project, entitled Concert for One, will pair solo musicians with individual listeners for 60 seconds of “focused performance and concentrated listening.” While the concept is the same as the Taiwan version’s, the Boston project features a new twist. Here, the one-minute serenades will take place inside “specially outfitted shipping containers” because in this day and age, we’re apparently incapable of listening to someone for a minute unless we’re trapped inside a giant metal box with them.

Unlike many concerts, there are no tickets to buy online, no box office to rush, and no sketchy third-party resellers to message on Facebook—rather, the only way you can take part in the experience is by showing up to the project’s two staging locations, Chinatown’s Chin Park and Harvard Square’s Science Center Plaza, and getting in a good old-fashioned line.

For the musicians, however, the road to the shipping containers was not so simple. The application process required hopefuls to upload videos of themselves playing and write essays about why they wanted to participate. 60 musicians were ultimately selected, from a variety of experience levels and musical backgrounds. Many play stringed instruments or piano, but there are also musicians who will perform on bassoons, saxophones, Latin American cuatro guitar, and Mexican vihuela, a five-string guitar often played in mariachi groups. The musicians are projected to log 120 hours of performance time over the span of 5,000 concerts for one.

Whether you get to spend a minute with a flute or a fiddle player, though, is out of your control. Details of the performance, from the performer’s name to the instrument to the music they will play, will be withheld from listeners until they enter the space.

Concert for One is certainly an ambitious undertaking, but Celebrity Series is no stranger to large-scale public arts projects. The nonprofit was behind the 2013 Street Pianos Boston project, in which 75 hand-painted pianos were scattered across the city, and the 2014 Le Grand Continental project, which involved over 100 dancers performing choreography in Copley Square.

Because Concert for One is free and open to the public, Celebrity Series Executive Director Gary Dunning feels that the project is a particularly good match for the organization’s mission: that the arts should be accessible by all.

“Whether it’s a violinist in a concert hall, a folk guitarist in a nightclub, or a busker on a subway, live performance is the connection between musicians and listeners in a defined space, for a period of time,” Dunning says in a press release. “With Concert for One, we’re offering thousands of special moments for anyone who wants to experience one.”