The North American debut of Kimsooja's first participatory art exhibit will be on view through January. 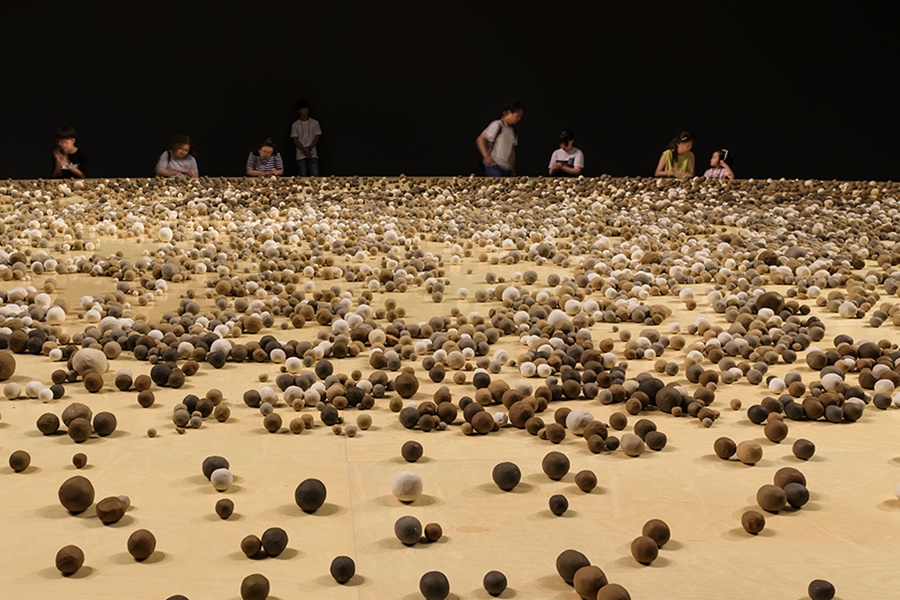 Most of us abandoned playing with clay around the same time we stopped playing with dolls and dress-up clothes. But in the eyes of Korean artist Kimsooja, there’s great value in the simple practices of holding and shaping clay, and adults are missing out. That’s why her first-ever participatory art work, Archive of Mind, relies upon the medium.

The exhibit, which made its North American debut Friday at the Peabody Essex Museum, calls upon participants to perform one simple task: make a sphere out of a lump of wet clay. However, as anyone who had a childhood Play-Doh collection knows, rolling out a ball isn’t nearly as easy as it sounds.

“You can only make a perfect sphere when you have applied equal pressure on all points on the surface of the ball,” Trevor Smith, curator of PEM’s Present Tense initiative, says. “So it’s almost an impossible task.”

Don’t worry: Archive of Mind isn’t about making a structurally perfect sphere. It’s about using the process of making the shape as a meditative practice.

“At first you’re aware of the coolness of the clay and the wetness of the clay, and as you roll out the ball between your palms, the clay warms up,” says Smith. “Your relationship to this experience changes. Many people will get to the point where they’re not even necessarily aware anymore that they’re rolling the clay ball. It’s a very low-tech, earthy, and direct kind of meditation through repetitive, physical action.”

Here’s how it works: Upon entering the Archive of Mind space, participants are offered a choice of several different types of clay. After taking a chunk, as big or small as they like, they take one of the 24 seats around the 35×15 foot table, where they can silently roll their spheres. A pre-recorded ambient soundtrack, composed of sounds generated by—yup—clay and water, plays from a 12-channel sound installation, giving the recording a disembodied, immersive quality. Smith says that participants tend to stay in the space and focus on their spheres anywhere from a couple to 15 minutes.

Since the exhibit has only been on view for a few days, the table still has plenty of room for you to contribute a sphere of your own:

But, as you can see in footage and photos from Archive of Mind‘s previous runs in Korea and Italy, the workspace definitely won’t stay clear forever.

When you look at a table full of clay spheres, Smith says, you can feel the energies of the individuals who made them. Some are nearly flawless, while others have thumbprints, dents, or flat spots. This collaborative tableau of imperfect spheres helps to convey one of the themes of Kimsooja’s work: that humankind is united by collective endeavors every day.

“By having everybody focus on a single task, the creation of spheres, you have a real equivalence that is set up,” Smith says. “If you think about our daily lives, there are many of these small gestures that we make towards one another or toward the execution of tasks—but it’s quite rare to have an image of that.”