An amateur genealogist in Massachusetts discovered two intersections on the celebs' family trees. 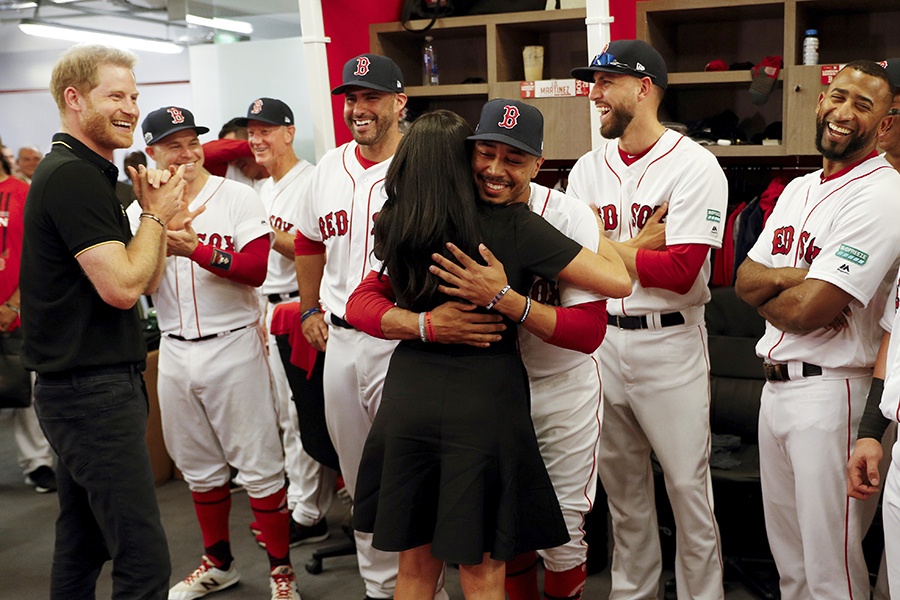 Photo by Peter Nicholls/Pool via AP

Once upon a time, in a kingdom known as Ohio, Katie and Richard Betts were wed. Little did they know that generations later, their relatives would include a World Series winner and the Duchess of Sussex.

Yes, Red Sox slugger Mookie Betts lived out the fairy tale of many an Anglophile this weekend when he not only met, but hugged and claimed familial relation to Her Royal Highness, fashion icon, actress, and former professional calligrapher Meghan Markle. Betts, who was in the UK for the Red Sox’s two-game series against the Yankees at London Stadium, was interviewed in a Boston Globe story last year in which amateur genealogist and Burlington resident Jim McNiff revealed that there are two links between Betts’ and Markle’s family trees.

McNiff, who is also known for his deep research into the family trees of Tom Brady and Bill Belichick, decided to dive into Betts’ family tree last year, and discovered that it first intersects with Markle’s family history about 150 years back. According to census records, Markle and Betts’ great-great-grandfathers, Jacob Betts and Joseph Betts, lived next door to each other on a plantation in Madison County, Alabama. It is unclear, however, whether or how Jacob and Joseph were related.

When the Globe story ran last year, Betts commented that he would like to meet Markle, which is honestly a pretty tepid response to finding out you share heritage with the woman who has completely disrupted the conventions of the Royal Family and also played the starring lead role in prominent Hallmark TV movie The Dater’s Handbook.

“I wonder if she’s a baseball fan,” Betts mused. Mookie. Have you watched even one of the Meghan and Harry biopics? HRH was obviously a little too occupied lobbying major companies to stop making sexist TV commercials to forge an interest in something as paltry as “home runs” and “stealing bases.”

As those of us who did watch Harry & Meghan: Becoming Royal, Harry & Meghan: A Windsor Wedding, or controversial Lifetime movie Harry & Meghan: A Royal Romance, know, Markle is passionate about sports, at least when it comes to using them to aid wounded, injured or sick service veterans. Markle was present at the Yankees/Red Sox faceoff in support of the Invictus Games, the sporting event her husband founded for former armed service personnel. 10 Invictus Games athletes were in attendance along with the royal couple.

Betts was reportedly surprised at the Duchess’s presence at the game. “I didn’t know she was coming. I knew [Prince Harry] was coming,” Betts said, according to the Globe. “I told her about the story and she laughed and gave me a hug. She didn’t know about it. They probably didn’t believe it.”

So, does all of this mean that Betts has a claim to the crown? Nope. He’ll have to be satisfied with the title of “first player in MLB history to win MVP, Silver Slugger, Gold Glove, batting title, and the World Series all in the same year,” as even Cousin Meghan doesn’t fall in the line of succession. However, her infant son Archie Mountbatten Windsor, Betts’ cousin-once-removed, is seventh in line for the throne. He is also, according to the photos below, the proud new owner of a Red Sox onesie and what appears to be a very small baseball bat.

Tonight, The Duke and Duchess of Sussex attended the first of a two game series of the Major League Baseball #LondonSeries, in support of @WeAreInvictusGames. Tonight’s highly anticipated game between the #Yankees and #RedSox took place at London stadium, Olympic Park. The @WeAreInvictusGames, of which His Royal Highness is Founding Patron, has been selected as charity partner for the @MLB 2019 series. The Invictus Games Foundation is the international charity that oversees the development of the Invictus Games, an international adaptive multi-sport event in which wounded, injured or sick armed service personnel and veterans participate. It celebrates the power of sport in recovery and how it can help, physically or psychologically, those suffering from injuries or illness. The word ‘invictus’ means ‘unconquered’ – it embodies the fighting spirit of the competitors. As part of the partnership, the Invictus Games Foundation have a team participating in London’s #Softball60, the social softball series built for the city and targeted to introduce the sport to new audiences and demonstrate that it is an inclusive sport. On this #ArmedForcesDay, tonight’s event was also a chance for Their Royal Highnesses to shine a light on the men and women here in the UK and around the world who have sacrificed so much for their country. Discover more about the Invictus Games Foundation through the link in our bio. Photo credit: PA