The exhibit, which will open the same day as PEM's new wing, is a reflection on the museum itself. 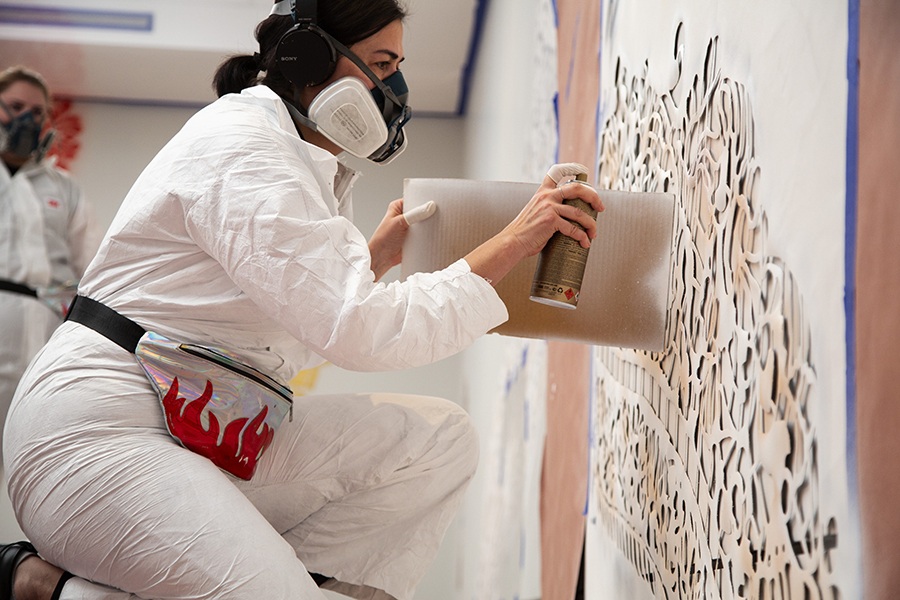 As an emerging street artist,Vanessa Platacis used to wander the streets of Boston at night, adorning both public and private walls with stenciled and spray painted designs and tagging them with her pseudonym: Pixnit.

Now, nine years after she symbolically killed off her alternate, guerrilla graffiti artist identity,  Platacis’s work is a little more legal, but no less expansive. Now a college professor at the Savannah College of Art and Design, the Tufts University/School of the Museum of Fine Arts grad has created LED light installations, text paintings, and line drawings, displaying her work at museums and galleries across the U.S. and Europe. Recently, though, she’s found herself making a return to her stencils and spray guns—first through an exhibit subtitled “Pixnit Revisited” in Savannah, and now through an installation at the Peabody Essex Museum called Taking Place.

In designing the installation, Platacis wanted to convey a theme of cultural exchange, inspired by Salem’s identity as a port town—and what better symbol for Salem’s cultural crossroads than PEM itself, a museum with diverse collections of Asian, African, and Oceanic art? Taking Place is thus a meta-work of sorts, a re-imagining of the museum’s collection that highlights the connections within the museum’s varied catalog.

Platacis began Taking Place by studying the museum’s collection, working closely with museum staff to view and examine objects on- and off-display and choosing the works that would feature in her own. To actually create the installation, Platacis followed the same steps she did as a street artist. While other artists have turned to laser cutters to make stencils in recent years, Platacis still prefers to handcut hers with an X-Acto knife—she made 210 stencils for this project, all by hand. Then, she and her two assistants applied the stencils to the walls and spray painted the designs, using a variety of graffiti techniques to add depth and dimension. From start to finish, the team was able to finish the installation portion of the project in only two weeks.

“I call it painting at the speed of air,” Platacis says.

Upon first walking into the space, you’ll encounter natural forms and intricate florals. As you proceed deeper into the space, the garden gives way to larger-than-life versions of the museum’s objects. It’s a compelling, enchanting space, one where the Cheshire Cat and Mad Hatter would likely feel very at home. “You can see references to specific objects in the collection, but I’m also expanding, extrapolating, abstracting from that,” she says. “What I ended up installing ended up being much more of an imaginary realm.”

Taking Place will open to the public on September 28, and will be on display until January 1, 2022. The exhibit’s opening day will be  a landmark one for PEM, as the museum will debut its new 40,000 square-foot wing and new garden space at the same time. Platacis’ exhibit lies at the intersection of the old museum and the renovated space. She hopes that, as curious visitors come to PEM to check out its expanded offerings, they take a moment to walk through and explore Taking Place.

“I hope that they’re able to be in an art installation in a way that might be different from the way they might interact with one of the other gallery spaces within the museum,” Platacis says. “I’m trying to peel away that perception of that red velvet rope in the museum space and make it more open and inviting to the community, to help them feel like they’re taking part in an experience.”