Who says summer is ending? 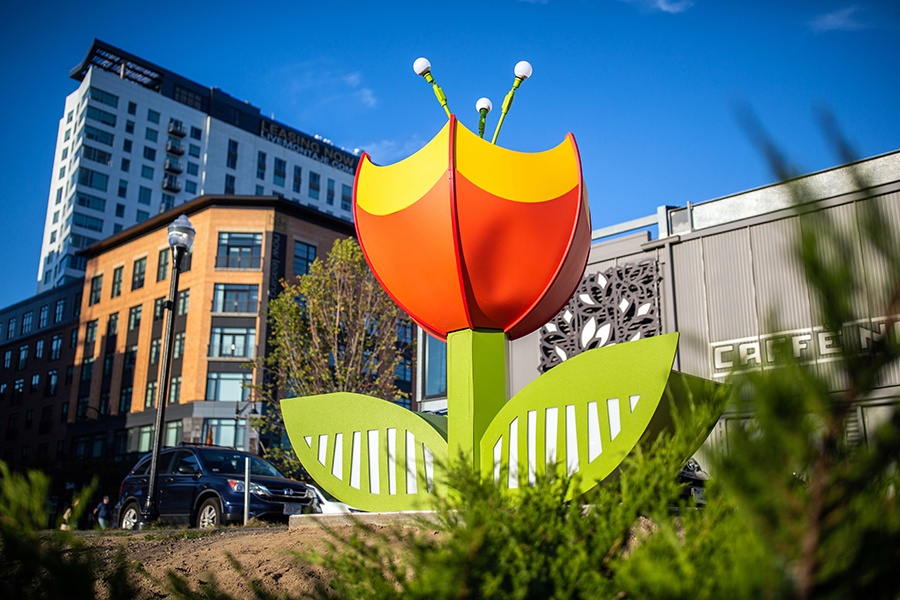 While we might be slowly and inevitably crawling toward the cold season, this is one garden that won’t be going anywhere as the temperature drops. Assembly Row has officially unveiled “Bloom,” a set of four giant flower sculptures that add a touch of whimsy to the neighborhood’s growing public art collection.

“Bloom” was developed by Artists for Humanity, a local nonprofit that employs underserved students for art and design work. The organization, which employs over 325 students annually, says that its programming helps students strengthen their art-making, entrepreneurial, and even STEM skills.

Students who worked on “Bloom” certainly got to flex both their creative and analytical muscles. The project, which has been in the works since the spring, was a product of AFH’s 3D Design studio, where teens sketch, draw, model, and execute construction arts projects, from eco-friendly furniture to artsy bike racks to sculpture projects for Massport and State Street.

“Projects like these require tons of physics and math—which means we come together as a studio and figure it out together,” said Cameron, a high school senior who worked on “Bloom,” in a press release.

The teen artists worked with the commissioner of the project, Federal Realty Investment Trust, to settle on a design—four twelve foot tall flowers that include attached benches and a light-up feature at night. Working with a team of adult mentors, the group sketched, modeled, and eventually assembled the flowers out of steel and Playboard, a UV-stable, easy to clean material often used in playground equipment. Thanks to that hardy coating, Assembly Row-goers can climb the structures and pose for photos. The installation is set to remain at Assembly Row for at least two years.

We have some BIG projects in the works at AFH. Can you guess what we’re building?

Everything’s coming up 🌷🌷 @LibertyMutual Career Center, where our teen artists are creating these amazing flower sculptures. Keep your eyes peeled — they’ll be *glowing* in Somerville soon! 🔮🌱

With the addition of “Bloom,” Assembly Row brings its public art installation tally to six. In addition to the giant flowers, Assembly Row patrons can admire a fresh “Welcome to Somerville” mural along the Lombardi Underpass, shipping container art,  and a large-scale, dreamy illustration on the Montaje parking garage.