And yes, Pierre Delecto made an appearance. 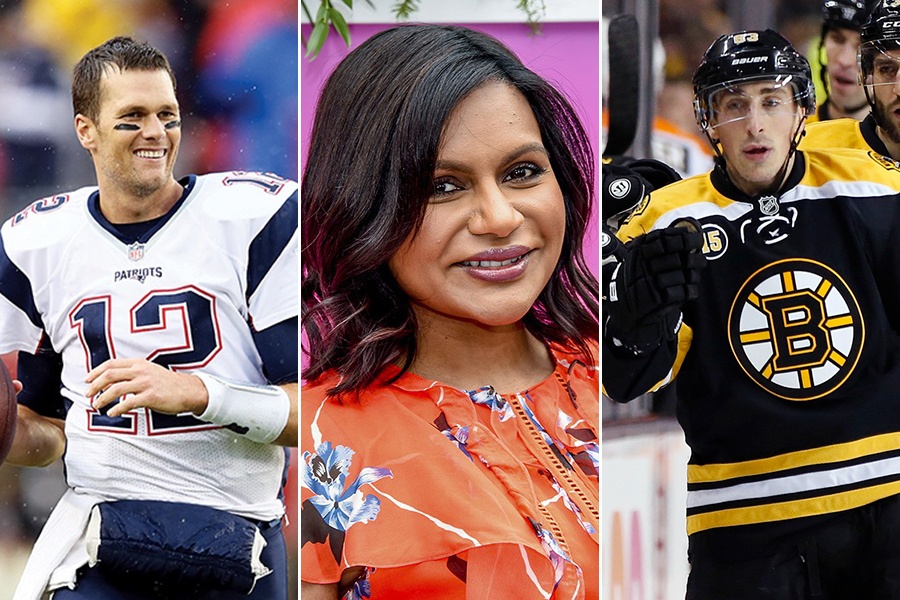 Trick or treating might be postponed for the younger set, but that doesn’t mean that grown-ups can’t still have their fun. While the sun hasn’t even set yet, famous Bostonians far and wide have already started showing off their Halloween getups on their social media. Some are impressive. Others, less so. We rated all the famous Bostonians’ Halloween costumes we could find on a scale of 1-5 pumpkin points, taking into account factors like costume complexity, originality, and general enthusiasm for the holiday. Which celeb is the spookiest of them all? Read on to find out…if you dare.

So it’s not the most original Halloween costume idea out there, but TB12 did a respectable job of emulating a guard of the Galactic Empire. While the flashy orange and white sneaks are a little less than authentic, with that Stormtrooper helmet, everyone knows exactly what Tom’s going for. Plus, he gets bonus spooky points for that truly terrifying It pumpkin in the background of his Instagram shot.

Pat the Patriot: The Grim Reaper

As far as Patriots’ players Halloween looks go, none could outdo one Pat Patriot. As a costume himself, Halloween is kiiind of Pat’s wheelhouse, after all. For the Patriots’ game against the Browns at Gillette this past weekend, the beloved mascot sported a black hood, a scythe, and some ominous glowing eyes, transforming into a very convincing Grim Reaper. If the final score is any indication, it’s safe to say that Pat’s deathly getup had Baker Mayfield and the gang thoroughly spooked. Well done, Pat.

Mindy, if you truly are “very excited” about Halloween, where’s your costume? Kaling can usually be counted on for a good Halloween disguise (last year she was a bottle of mustard) but so far, all she’s shown off on her Instagram is a pretty ho-hum—albeit vast—collection of brightly-colored wigs. We’ll bring her up to a two-pumpkin score for the Ghostbusters backing track, but we’re still holding out hope that she’ll deliver a better costume later, perhaps to take her daughter trick or treating.

Update: Kaling did in fact up her game later Halloween night, sporting a blonde wig, a Hawaiian shirt, and a flashy belt buckle as Once Upon a Time in Hollywood’s Cliff Booth. We knew she’d come through! We’ve upped her score appropriately.

#happyholloween 🎃 #harrrypotter, #peaceandlove dude, and one cute to death #pirate 🙂 (Oh and I’m kind of a French artiste! Also with a nod to #Picasso- got the scarf at the Picasso Museum in #Barcelona- fitting for my last day of #spanishclass. ¡Me encanta español!) P.S. my costume is a little too subtle cuz it feels like people are taking me seriously. 😄

Thomas as #PierreDelecto and Joe as Nacho. World beware. pic.twitter.com/3SstDeyvwb

Well played, Romneys, well played. Tagg Romney, Mitt Romney’s oldest son, has tweeted out a photo of two of his children prepping their Halloween looks, and it seems that one of them took some inspiration from Grandpa. In dark glasses, a mustache, and a snappy tux, Thomas Romney has assumed the identity of Pierre Delecto, Mitt’s secret Twitter identity that was unearthed earlier this month. While he could perhaps take some beret-wearing lessons from Joey McIntyre, we’d say the Gen-Z Romney’s look is otherwise magnifique.

A good makeup job can bring any costume to the next level, and we truly respect the commitment Amanda Palmer has made to her witchy look. The Lexington native darkened her eyes and cheeks with care, and the result is truly haunting. Plus, it certainly outdoes the costume of her husband, author Neil Gaiman, who appears to be dressed as…dirt?

Michelle Wu and staff: The MBTA

A group costume is always an ambitious undertaking, so the trick is to keep things simple, but effective. We think the #WuTrain nailed it with this MBTA costume, representing each of the MBTA’s lines through their colorful outfits. We assume that the two in green showed up late to work this morning, for maximum effect.

Was so great to have Brad Stevens come to New Hampshire and give the @PeteButtigieg team a pep talk. #HappyHalloween pic.twitter.com/PC3fExskxc

Or wait, is that Brad Stevens in a Pete Buttigieg costume? There’s really no way to be sure, since the Indiana Democrat is basically a perfect doppelganger for the Celtics’ coach. May we suggest they go as the Spider Man pointing at Spider Man meme next year? Anyway, nice work, whichever one of you this is.

Brad and Katrina Marchand: Dustin and Eleven from Stranger Things

Happy Halloween from Dustin and Eleven (Elle) from Stranger Things

Now THIS is how you do a Halloween costume. The Bruins’ left wing and his wife Katrina went all-out on a couple’s Halloween costume that put all others to shame. The key to their gender-swapped tribute to Stranger Things is all in the details—from Brad’s barrettes to Katrina’s “missing” teeth. We’re impressed and a little unnerved, and that’s exactly the impression a Halloween costume should leave.