How Does Quincy Market Put on the “Blink” Light Show?

It's all thanks to the engineers in charge at the Dover-based firm DesignLight. 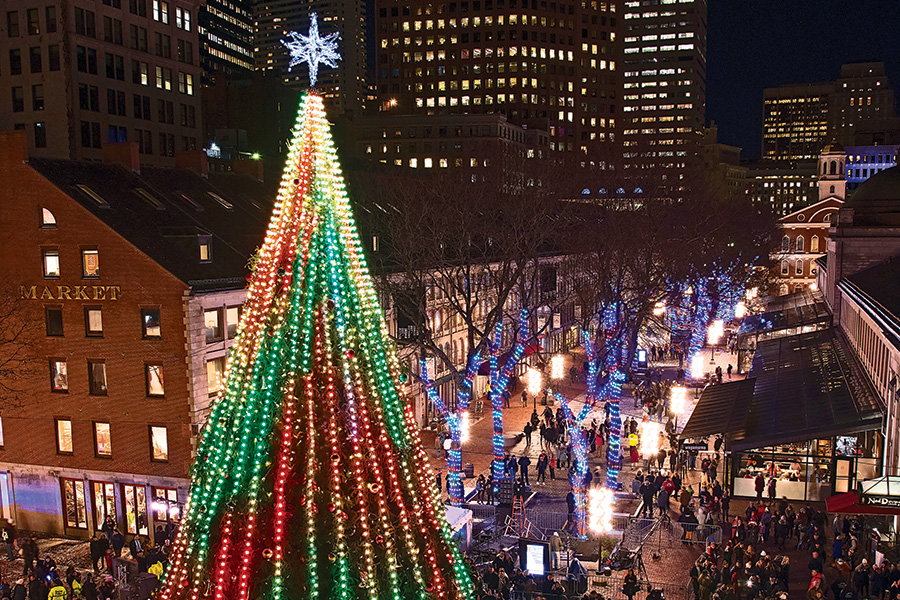 Every holiday season for the past few years, I’ve taken my kids down to Faneuil Hall to see the big tree and the “Blink” light show, where all the lights around Quincy Market sync up to the music. It’s amazing! How do they do that? —D.W., Wakefield

Hey, D.W., was that you I saw running after your kids in Quincy Market last year while everyone else jockeyed for the perfect spot to watch the light show? Oh, wait—that was me. I, too, bring my wee ones downtown to see the marvel that is “Blink.” Though the huge tree has been shining bright since 1989, it was only in 2012 that Faneuil Hall Marketplace launched the accompanying light show as a way to step up the holiday festivities throughout the season. According to marketing director Ed Hurley, it’s the largest part of the marketing budget each year, which makes sense: After all, once you’ve seen “Blink,” you’re more likely to shop and eat around Faneuil Hall—or at least that’s what we do.

But to answer your question, I spoke to Len Schnabel, principal at DesignLight, the Dover-based firm that arranges and programs the display. Schnabel explained that in mid-November his company comes in for two weeks to string the holiday tree with hundreds of thousands of LED lights. (The dozens of permanent trees are strung with lights year-round.) Each LED light has three nodes of red, green, and blue, which can be blended to make a million hues, and DesignLight can control each node on the tree individually. I won’t overwhelm you with all of the engineering details, but put simply, the lighting team programs every node so it syncs with every 10th of a second of music, like a granular version of the stop-motion animation you see in movies. The results when it’s all put together? An animated Santa climbing up and down the tree during Mariah Carey’s “All I Want for Christmas Is You” or rings of light swirling to the frenetic bluster of the Trans-Siberian Orchestra’s “Wizards in Winter.” In other words, Schnabel says, “This is not your grandmother’s holiday tree.”

In fact, as I spoke to the lighting guru this fall, he was keenly aware of his December 3 deadline, when WBZ airs the annual tree-lighting ceremony that will flip on the “Blink” switch and introduce a new song to the display, Kelly Clarkson’s “Underneath the Tree.” Then every day on the half-hour from 4:30 to 10 p.m. through January 1, all of this work will seem as effortless and sublime as the illuminated joy on our kids’ faces.